One of the BMW 3-Series' strengths that has kept it at the top of the small premium car segment for years is the fact that it is available in four body styles, all of which sell in decent numbers. From 2008 through this past February, more than a third of 3-Series retail registrations were coupes, convertibles or station wagons, with sedans making up the rest of the model lineup. The 3-Series has consistently enjoyed a more diverse mix of body styles than its competitors.

However, that situation is changing. Five of the six 3-Series rivals that offer more than one body style have seen a substantial increase in their coupe, convertible and station wagon mixes. The convertible and station wagon sales rates for these six models as a group have more than doubled, while the coupe has almost doubled. The sedan mix for these 3-Series fighters has dropped almost 10 percentage points over the same time period.

The Cadillac CTS sedan now accounts for just 70% of overall CTS registrations as the recently-launched coupe and station wagon have gained traction. The A4/S4 sedans now comprise less than two thirds of total A4/S4/A5/S5 deliveries because the A5/S5 has been well received, and the Lexus IS sedan now makes up just 80% of IS sales. Also, the lone 3-Series fighter that has not seen an increase in non-sedan body types, the Infiniti G, recently added the value-oriented G25 which only comes as a sedan. When the G25 is taken out of the G total, the G sedan mix has declined like the other models. 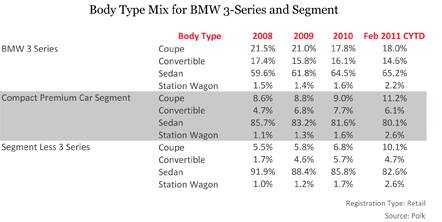 The Mercedes-Benz C-Class will soon follow suit with the launch of the C-Class coupe later this year, giving the compact Mercedes-Benz car more clout with which to battle the 3-Series.

This move towards greater diversity in body types is the latest in a long history of actions taken by 3-Series competitors to overtake the iconic BMW car. Thus far, none has worked. 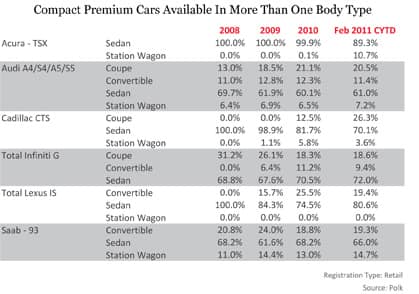 How will commitments to #carbonneutral economies affect the #electrification trend and what transformations of the… https://t.co/mad0Dg0tgE

New Podcast! Automotive R&D is at a pivotal moment as we enter a new age of vehicles, with #electrification,… https://t.co/EzIw2Y657k