Gene-editing (also known as genome-editing or genome-engineering) is a set of novel techniques that are used for manipulating the genome of an organism at desired locations. The most popular gene-editing systems are meganucleases (MNs), zinc finger nucleases (ZFNs), transcription activator-like effector-based nucleases (TALENs), and the clustered regularly interspaced short palindromic repeats (CRISPR/Cas9). All of the mentioned above gene-editing systems exploit the natural gene repair mechanisms after double stranded DNA breaks caused by nucleases.

In agriculture, these techniques are also becoming popularized as new plant breeding techniques. To date, CRISPR is the most advanced gene-editing system, however, to overcome its limitations, scientists are trying to find out other alternatives to this system as well. Many CRISPR-Cas9 classes and variants are being researched and exploited for their applications in crop agriculture.

Significant growth in the agriculture biotechnology sector is expected in the coming decade, which will be dominated by the gene-editing sector. Although transgenic crops are the most adopted agriculture technology with 191.7 million hectares of area covered under biotech crops in 2017, the technology is being criticized by the end consumers. Also, high costs and lengthy regulatory procedures are constraining the growth of this segment.

The perception of gene-edited crops as natural products by many countries is making them an easy substitute for transgenic crops. USDA's 2018 decision on not regulating the plants developed through traditional and new plant breeding techniques, if they are not plant pests or developed using plant pests, has opened the prospects of growth for gene-editing technology markets in the agriculture sector.

Owing to the need for higher yields, federal governments all over the world are becoming more open to the adoption of gene-edited agricultural products. However, potential regulatory requirements, environmental and ethical concerns, and consumer acceptance might stall the growth of gene-edited crops in certain regions of the world, such as the European Union.

The potential benefits of gene-editing in crop agriculture can be broadly categorized as improved nutrition and greater productivity. The private sector is mainly focusing on improvement of maize, soybean, canola, cotton, rice, and wheat crops using gene-editing technologies. As of 2019, among large agriculture biotechnology firms, Corteva Agriscience (previously, an agriculture division of Dow DuPont) is leading with around 65 patent applications in genome editing in agriculture at the World Intellectual Property Organization.

The NAFTA region dominates the market with 78% of the global market share. With the presence of 12 gene-editing companies, the United States forms the hub for the agricultural gene-editing industry. APAC is the second largest market with 12% of the market share. LATAM and EMEA accounts for 6% and 4% of the market shares, respectively.
By product type, the agricultural gene-editing technology market could be segmented into seeds, food products and technology/trait licensing. In 2019, technology/trait licensing formed the largest segment with a size of $193.13 million. The market for gene-edited seeds is expected to flourish particularly in the US and Canada over the coming decade. 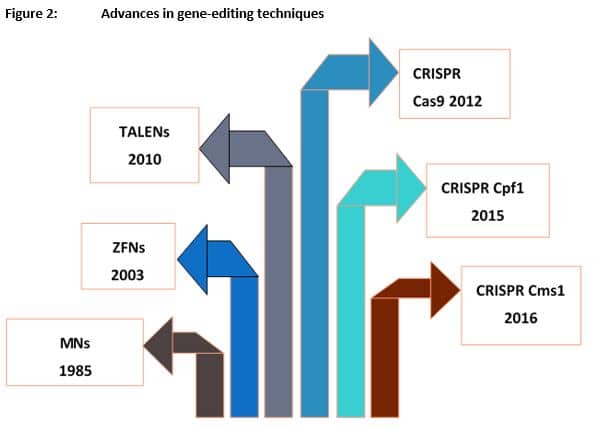