Scope: Looking at 19 brands and their corresponding dealer locations and determining whether or not the location of Walmart stores influence the alignment of dealer networks in Ontario.

Methodology: Examining whether there is a Walmart location within a two kilometer buffer and measuring the change in the number of dealer networks.

Results: Year-over-year, the percentage of dealer locations within two kilometers of a Walmart store has increased by at least 4.8% with every brand except GM and Chrysler. GM has increased the percent of Walmart accessible locations even though their dealer network shrank in Ontario by 95 locations (2009 - 2011).

Splitting the dealer networks into Asian, European and North American categories, the tendency for Asian manufacturers to locate near Walmart stores seems higher. Of the Asian brands, 37% of locations were deemed Walmart accessible as compared to 29% of North American brands. European brands measured 33%, but they had the highest growth of 13.9%. Interestingly, overall growth for European brands was only 4.2%.

Understanding the trend: There could be many reasons for this trend toward locating near Walmart locations. Many Walmart anchored facilities are located near the outskirts of the cities where land availability is widespread. Placing a new location in highly visible areas (i.e. proximity to large big box franchises) is not an uncommon practice, but these areas require large vacant swaths of land with a typical progression of retail stores first and car dealerships second. Land availability might be a better indicator of network development, although given a choice between land availability without retail and land availability with established retail, the latter is deemed more receptive. Looking back at the differences among Asian, European and North American networks, the North American networks are older and more established compared to Asian networks, giving the newer Asian networks more choice and going with Walmart proximity.

It appears that Walmart is the chicken to get brands to cross the road. 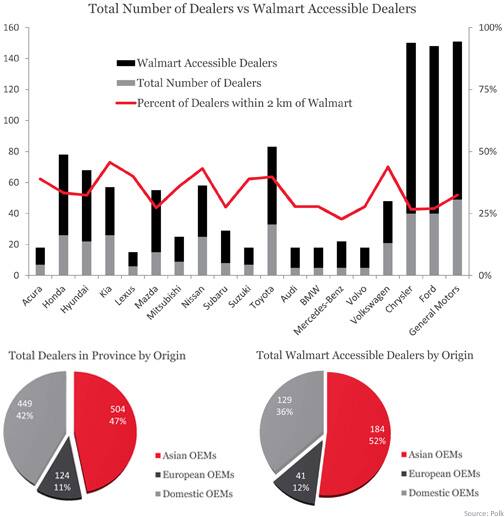