Blockchain: Industries may not be prepared for the complex technology, but its impact will be huge

Blockchain is the least mature of the six transformative technologies tracked by Digital Orbit. Complex and largely confined in application to the financial sector, Blockchain together with 5G had the lowest scores in readiness, one of Digital Orbit's two key measures. The low scores meant that both Blockchain and 5G were considered least likely for adoption by industry.

And yet Blockchain scored impressively on impact, Digital Orbit's other key measure, gauging how influential a specific transformative technology will be on six specific industries, such as automotive, healthcare, and manufacturing.

Blockchain's peculiar combination of low readiness and high impact can be attributed in part to hype. As a technology like Blockchain rises to prominence, excitement often leads to overinflated expectations about its potential to impact or disrupt the status quo.

But while hype may play some role, worth noting is that both industry participants and IHS Markit analysts were largely in agreement that Blockchain's impact will be significant—with the normally more cautious IHS Markit analyst collective awarding Blockchain with scores even higher than those from the participatory industry group.

Industries that could benefit from Blockchain

For the IHS Markit analyst group, Blockchain's impact will be considerable in industries that require high data security and integrity.

In healthcare, for example, Blockchain has the potential to resolve many long-standing issues, including the creation of a common health information database accessible to doctors and providers alike, regardless of the electronic medical system used.

In the power and energy sector, Blockchain can provide a more efficient marketplace and reduce the chances of fraud in energy trading and process optimization. Blockchain can also enable automated management of the power grid, helping to protect against fraud in grid edge transactions.

The business value in 2018 of Blockchain across all industry verticals was estimated by IHS Markit to be worth $5 billion, of which 72% derived from the financial sector, as shown in the chart below. 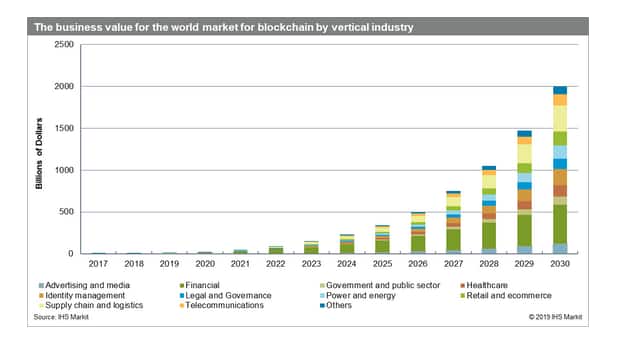 Blockchain's connection to the financial sector stems from its earliest days. It was the world of finance where Blockchain was originally targeted for use, and finance has also provided to date the largest number of proof-of-concept trials and commercial deployments of Blockchain.

But although the financial sector could be credited for launching blockchain into the mainstream, IHS Markit believes that other industries will be the biggest drivers in the upcoming years. By 2030, the Blockchain market will be worth approximately $2 trillion.

Headed to #ISE2020 in Amsterdam this February? Let us know if we can arrange for you to meet any of our analysts wh… https://t.co/wDcmVko2hS

Catch our analysts this March at #OFC20! Contact us today to arrange a meeting: https://t.co/8TLS8to4Rc https://t.co/KjKNe58K0Q