Biojet for aviation – A growth story for the 2020s?

Aviation has moved center stage in the climate change debate. A major challenge for the aviation industry is how to simultaneously meet the increased demand to move people and goods by air while also decarbonizing. In its study on the future of aviation, Reinventing the Aircraft, IHS Markit expects the demand for aviation to almost triple between 2018 and 2050. At the same time, the International Air Transport Association (IATA) has set an aspirational goal to halve CO2 emissions generated by international aviation by 2050, compared with 2005 levels. Unlike other industries where there are multiple viable decarbonization pathways, the options in aviation are limited - not only by economics, but also by what is physically possible and can be certified as safe in time to be commercialized at scale before 2050. These challenges have resulted in a focus on sustainable aviation fuels (SAF) as the primary mechanism to ensure in-sector decarbonization1 by the International Civil Aviation Organization (ICAO), the United Nations body that oversees international aviation.

Today the bulk of fuel demand in aviation is kerosene. International aviation demand is approximately 4 million barrels per day (b/d), with domestic aviation accounting for a further 3 million b/d. IHS Markit estimates that total CO2 emissions from international aviation are approximately 600 million tons, close to 1.5 times the 2005 levels. SAFs have the potential to curb emissions from the sector due to their lower carbon intensity. There are essentially two main SAF options. One possibility is biojet fuel made from agricultural or waste feedstock using various production pathways. A second option is low-carbon intensity synthetic fuel, made from hydrogen. This fuel is produced via large-scale electrolysis, which is fed by renewable energy and carbon, captured either directly from the air or from a concentrated source such as a large industrial installation. Low-carbon intensity synthetic fuels have the largest potential to reduce CO2 emissions from aviation due to their very low - potentially zero or even negative - carbon intensity. In fact, the IHS Markit study found that if the aviation sector is to achieve the aspirational goal of a 50% reduction in CO2 emissions by 2050 versus 2005 levels via in-sector developments, low-carbon intensity synthetic fuels will have to account for a significant share of fuel demand in 2050. However, the key technologies required to develop these fuels at scale - large-scale electrolysis, direct air capture of carbon, and carbon capture and storage - are still either unproven at scale or prohibitively expensive. Although this is expected to change in time, these challenges mean that in the short to medium term, biojet will be the most viable SAF option.

Biojet can take several forms and can be categorized by both feedstock and production pathway. To date four biojet pathways (leading to six sustainability certifications) have been approved by standards organization ASTM International2 for blending with conventional jet fuel as outlined in the table.

IHS Markit estimates that the current demand for SAF is approximately 150 thousand tons per year, well less than 1% of total aviation fuel demand. Today, beyond the mandated levels in Norway and Sweden, uptake of SAF has been very limited. SAF demand under the US Renewable Fuel Standard (RFS) amounts to volumes contracted by United Airlines in California, while demand in the EU has so far been limited to volumes associated with marketing initiatives launched by certain airlines, such as KLM and SAS. The reasons for the limited uptake of SAF are threefold: SAF are more expensive than conventional alternatives, there is limited dedicated production capacity, and existing regulation incentivizes or mandates pushing biofuels into the road sector.

For SAF to take off, regulators need to create a framework that mandates their use and incentivizes production of biofuels for use in aviation. The ICAO previously tried and failed to implement a global SAF blending mandate. However, regulators at the regional, national, and local level are starting to develop policies to support the penetration of biojet. Aviation is included in the EU's Emission Trading Scheme (ETS) and SAF made from non-crop feedstock can also be used to meet the targets under the EU Renewable Energy Directive (RED I until 2020; RED II for 2020-2030). Norway and Sweden have also imposed SAF blending mandates to cut greenhouse gas (GHG) emissions from aviation. In the US, SAF can be used to meet the advanced biofuel targets under the Renewable Fuel Standard (RFS), a federal mandate for the road transport sector. In California, the Air Resources Board (CARB) has approved a pathway that allows the voluntary use of hydroprocessed esters and fatty acids (HEFA) under its Low Carbon Fuel Standard (LCFS). This cap-and-trade system targets a 7.5% decline in the carbon intensity of its transport fuel emissions from 2010 levels by 2020 (-20% by 2030). In Southeast Asia, governments and researchers are discussing the use of palm oil in aviation, although this remains a highly controversial pathway for many airlines and aircraft manufacturers. 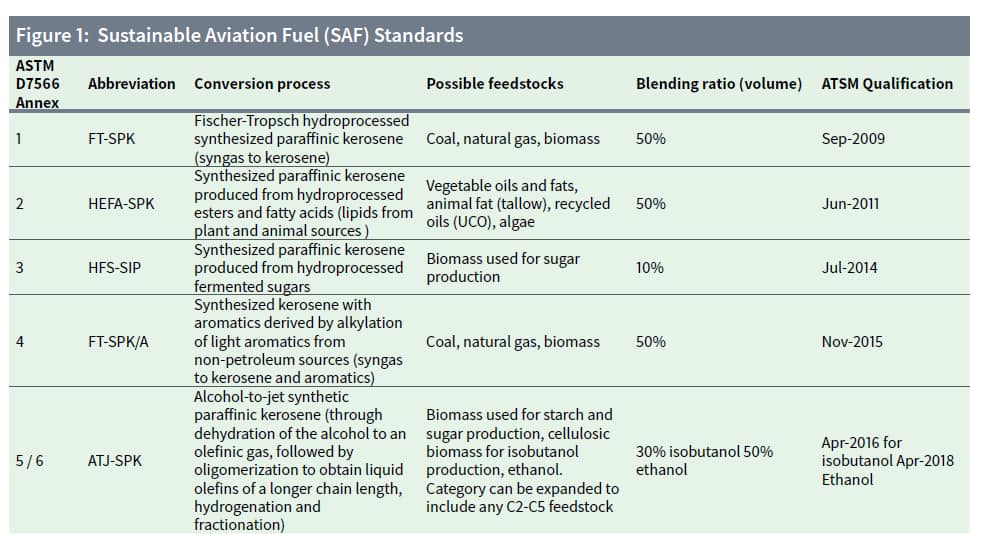 Although directionally positive for SAF, most of these policies stop short of imposing the mandates that will be necessary to boost demand for SAF. Even if that were to happen, regulators would also need to consider that SAF supply has been limited. In fact, standalone SAF plants are hard to find. Part of the reason for this is that although large volumes of HEFA could be supplied by various hydrotreated vegetable oils (HVO) plants3, legislation currently incentivizes the use of these biofuels in the road transport market. They also compete there with fatty acid methyl esters (FAME) and other liquid biofuels. Worldwide, more than 5 million tons per year of HVO production capacity is available. Part of that could switch to SAF, but only if regulation is supportive.

Despite the headwinds, the number of standalone projects with industrial-scale SAF production has grown in recent months. IHS Markit identifies two projects in the EU: the Altalto project in the United Kingdom, which is due to produce SAF from 500,000 tons of solid waste per year and is backed by Velocys, British Airways, and Royal Dutch Shell); and the Delfzijl project in the Netherlands, which has a planned output of 100,000 tons per year and is run by a consortium consisting of SkyNRG, the Amsterdam Airport, and KLM. In the US, fuel ethanol and isobutanol supplier Gevo is targeting industrial-scale alcohol-to-jet (ATJ) production, and BP and Fulcrum BioEnergy are building a waste-based SAF plant in Nevada.

Theoretically, global SAF production could be significantly higher than today's 150,000 tons per year. However, legislation will also have to secure feedstock. This mainly relates to the waste feedstock category in the EU and partly also to the US. In terms of tonnage, IHS Markit estimates that more than 10 million tons of biodiesel were produced from waste feedstock worldwide in 2018. Of this, almost 4 million tons were made from used cooking oil (UCO). Increases are expected, especially in the EU, where the RED II asks for higher renewable energy shares with caps for crop-based products.

The bottom line: despite biofuel-derived SAF currently being the sole viable route to in-sector decarbonization of the aviation sector, regulation does not currently support either the production or use of biojet in the aviation sector. As a result, a quick build-up of SAF plants cannot be expected. If the road sector electrifies faster than expected, some biofuel currently being blended into road fuels could be rediverted to the aviation sector. However, at the moment, this is more a faint opportunity than a credible growth story. In the longer term, if biojet and SAF more generally are to gain a significant share of the market, usage mandates will be required. 1-The ICAO is also proposing a market-based mechanism, the Carbon Offsetting and Reduction Scheme (CORSIA) as a means to offset emissions from international aviation outside of the sector. 2-ASTM D7566 Annexes 1-6 3-The often-used term HVO is misleading as these plants also process other feedstock like animal fat, UCO, etc.