Biofuels and refining: Is decarbonization a joint opportunity?

The traditional refinery and biofuels sectors are at a point of convergence - one caused by falling demand for petroleum fuels, driven by decarbonization, and aided by food demand slowing to a rate below agriculture productivity growth. Traditionally competitive in the fuels sector, oil and agriculture are now confronted with shared short-term and strategic issues that, if acted on, will materially change the direction of each industry. However, a clear, stable policy and regulatory framework is needed to realize the full potential of oil/agdecarbonization options.

Policy evolution of biofuels: How did we get here?
Policy support has been necessary for the development of biofuels. The relative importance of supporting or enabling policies varies by country and over time but generally biofuels are driven by three major policy areas: agricultural support, energy security, and environmental policies related to urban air quality and decarbonization.

The table shows the current ranking of the three major biofuels policy drivers by country. Today, decarbonization is the major policy force in the Organization for Economic Cooperation and Development (OECD) countries. For the rest of the world (except China), agriculture and the local economy are the most important factors.

The US shows how the supporting policy for biofuels has changed over time. Figure 1 shows the US biofuels policy progression, from early emphasis on agricultural support to energy security to decarbonization. It also notes EU policy highlights.

The combined impacts of these policies, and many others - including vehicle effeciency standards and maturing demographics - are causing oil demand to fall in most developed countries. This pattern will continue in most countries over the next several years. Going forward, the growth of electric vehicles could accelerate the decline in oil demand. 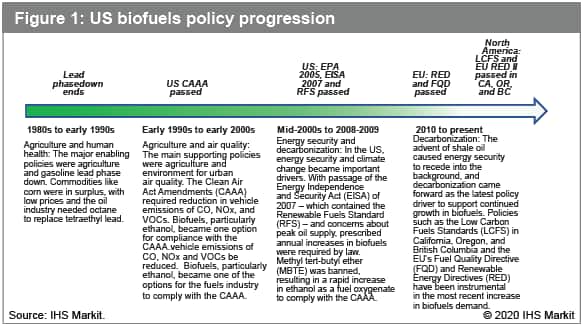 Refinery and biofuel synergies: Can the two industries come together at scale?
For the first 25 years of the biofuels industry, the refining and marketing industries had almost no involvement in terms of ownership of production. For the most part, these industries were competitors - only coming together at the distribution terminal or fuel outlet, when biofuels were blended with gasoline and diesel fuel.Three key policy events changed the relationship between the biofuels refining and marketing businesses:

The adoption of renewable diesel and jet fuel as a bio-product from conventional oil refineries could be considered the vanguard of continued convergence between the petroleum and bio-based transport fuels supply chain. To date, renewable diesel is the most compatible biofuel with existing refi nery processing. However, as decarbonization policies deepen and spread to other jurisdictions, processing expertise and technologies from the hydrocarbon processing industry could be critical factors for expanding biofuels production from biomass feedstocks.

The energy density of bio-oils allowed refineries to directly enter the biofuels production business at scale. The next step in direct refinery production of biofuels will likely be different than renewable diesel and jet fuel. It also will be costlier, due to the low-energy density of other widely available and studied feedstocks. Future integration with the refining and marketing supply chain, particularly with existing refinery operations, will likely require some form of biomass densification. They may also require the use of refinery-based processing technologies and practices (which are much closer to the biomass supply) in existing refineries and biofuels plants (see Figure 2).

Agriculture: Is it a sustainable solution?
Since the food chain can be a significant CO2 emitter, agriculture is seen as part of the climate change problem. However, it also can be part of the solution. Agriculture has the potential to adopt new technologies, alter farming practices, and increase production output in a more sustainable way. Linkages into the energy sector through renewable and biofuels represent a large opportunity to contribute to decarbonization.

To create carbon reduction pathways between agriculture and energy (and other sectors of the economy), clear policy and regulatory frameworks are needed to fully capitalize on agriculture's greenhouse gas (GHG) emission reduction potential. With these systems in place, farmers will be able to, in effect, "farm for carbon," which will facilitate decarbonization. These activities will initially focus on farming practices - such as more sustainable planting, crop protection, and harvesting techniques. But they could also include carbon sequestration in the soil, seed and crop selection and technology that rewards farmers for carbon reduction.

Based on current consumption trends, there is enough land in production to meet demand, since yield and productivity increases will be sufficient to match quantities needed. However, these projections do not include an increase in biofuels above what current policy mandates require. New policy initiatives would be additive. They also do not include transformative technologies that could increase productivity above baseline projections. These will be areas to monitor in the future.

Where do we go from here?
The separation between the refinery sector and traditional biofuels is ending, and a new industry structure emerges. How far this goes may depend on the policy and regulatory framework keeping pace with technology and markets. The refining sector brings a "refinery approach" to biofuels production that is underdeveloped. The traditional agriculture-oriented biofuels industry will benefit from R&D, technology, and marketing networks. The connection between the traditional refinery sector and biofuels must be supported by decarbonization actions, both in the public and private sectors. Fears of a repeat "food-versus-fuel" debate are tempered by an adequate productive base in agriculture - one that can support a feedstock base for the future growth of biofuels through increased productivity, potential new technologies, and shifts in consumptive patterns. With these drivers in place, the stage is set for an expansion in biofuels production, this time in tandem with - and via active involvement from - the refinery sector.

Biofuels Value Chain Service - Fundamentalsbased service delivers medium to long-term coverage of the supply chain, from feedstocks to refined products, and to supporting credit/ticket markets, including supply/demand and price forecasts to 2050. Find out more: ihsmarkit.com/biofuels-valuechain-service