Big ambitions: How Chile aims to be among the largest exporters of green hydrogen in the world

On 3 November, Chile's Ministry of Energy presented a "National Strategy for Green Hydrogen for Chile" with three main objectives: have 5 GW of electrolysis capacity under development by 2025; produce the cheapest green hydrogen in the world by 2030; and be among the world's three largest hydrogen exporters by 2040. These grand ambitions come with proposed measures including extending US$50 million to pilot projects, promoting hydrogen in end-user applications, and launching "green hydrogen diplomacy" to position Chile internationally.

IHS Markit recently published a report examining whether Chile has the resources, economic environment, know-how, and long-term policy focus to become a powerhouse in a future global hydrogen economy.

Already these resource and regulatory qualities transformed Chile into a testing ground for many international power utilities for their solar and wind ventures. In a country with an installed power base of only 25.5 GW, a remarkable 3.9 GW of unconventional renewables were added from 2016 to 2020.

This "Chile as a testing ground" approach could be repeated for hydrogen. The country's power market is oversupplied, and its renewables target for 2025—to meet 20% of demand from unconventional renewables—is already met, so renewable players are eager for hydrogen business opportunities.

The question is whether the scale and economics of Chile's hydrogen goals will support the enthusiasm.

For example, Chile aims to manufacture green hydrogen at below US$1.5/kg by 2030. This equates to generating electricity at US$15-20/MWh. IHS Markit analyses of the levelized costs of energy show the prospects for this to occur, but risks surrounding offtake options and returns could complicate project financing.

To meet its hydrogen objectives, Chile must rapidly increase production levels and reduce costs. This urgency requires rapid decisions on policy development, permit approvals for projects, and the delivery of financial support.

Yet green hydrogen is a nascent sector that offers few international precedents for policymakers. Therefore, Chile is instead relying on the growing experience of multinational companies, the advice of international governmental agencies, and the few international standards that do exist. It is also pursuing partnerships with other countries with hydrogen objectives (Figure 1). 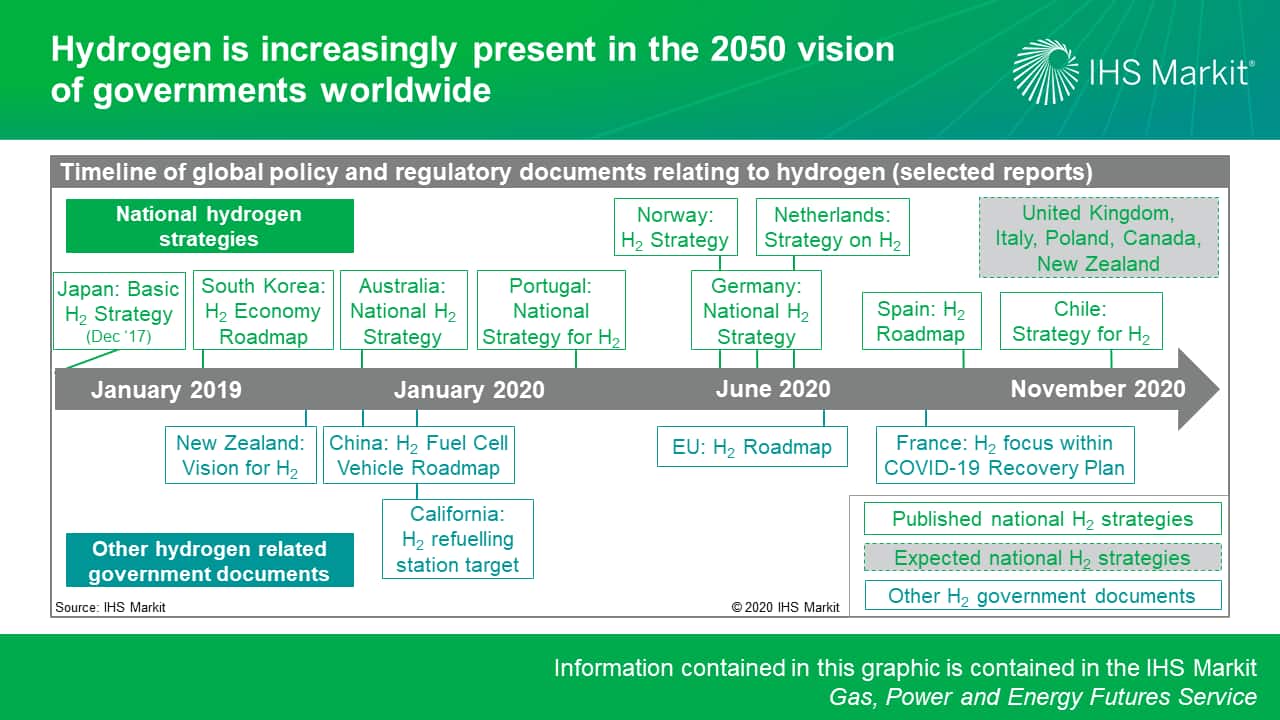 Another challenge in Chile's vision is finding hydrogen offtakers. This task will not be easy in Chile's small economy. Understanding this challenge, the government wants to promote hydrogen in six point-source and large-scale applications. Chile's mining sector will likely play a key role owing to the sector's size and need to reduce emissions.

Later when Chile will shift its focus from local offtakers to hydrogen exports, different challenges will arise: technologies to transport large volumes of hydrogen must be perfected, and Chile must position itself internationally as a preferred supplier.

Chile currently faces a period of instability. Social upheaval in 2019 led to a referendum to start drafting a new constitution, and the country faces immense challenges caused by the COVID-19 pandemic.

Investor uncertainty will be high until a new constitution is finalized. The constitutional rewrite, along with presidential elections in 2021, could cause debate on the role of the state, property rights, environmental protection, and foreign involvement in strategic sectors, including energy.

On the other hand, Chile's strong commitments toward private and foreign investment, its lack of hydrocarbon resources, and its cross-party support for sustainable development provide a good chance that the country will maintain its policy to develop green hydrogen.

A greater risk is rather that the pace at which hydrogen is promoted slows. The government will rapidly face the dilemma of using its public spending to support hydrogen pilot projects versus support poorer segments of the population in the wake of the COVID-19 pandemic.

Learn more about our energy research in Latin America.

Etienne Gabel, a senior director at IHS Markit with the Latin America Gas, Power, and Energy Futures team, specializes in the analysis of regulatory and market developments in the natural gas and power sectors.