Biden’s American Jobs Plan: An opening bid to reshape the US power system

On 31 March 2021, the Biden administration detailed the core components of its $2 trillion American Jobs Plan, which seeks to put the United States on a path to 100% CO2-free electricity by 2035 (among other objectives). Key elements that address the electric power industry are: 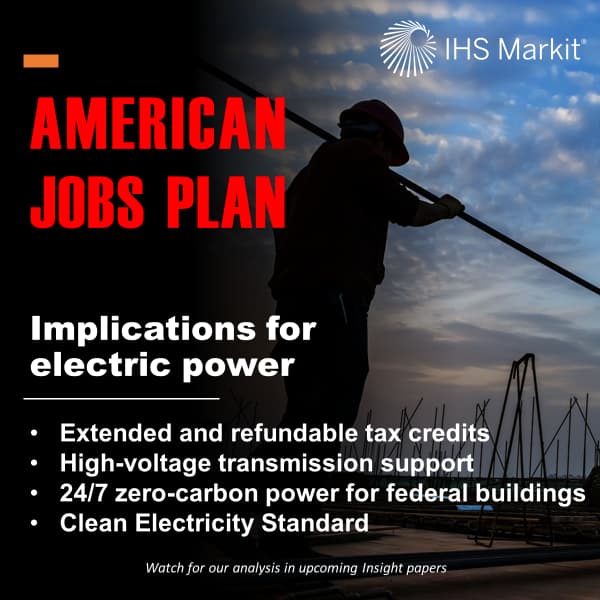 Onshore wind would be the biggest beneficiary from extending federal tax credits, owing to the complete loss of the production tax credit under the status quo. Instead of dropping to zero for projects that start construction after 2021, the production tax credit would remain at $15/MWh (2019 dollars), at least, for another ten years. The levelized cost of wind energy would drop by at least 20% for projects in the best wind resource regions of the country.

In contrast, if the solar investment tax credit is extended at 22%, the levelized cost of utility-scale solar would fall by 10-15%. Solar already has a permanent 10% tax credit, which dilutes the impact of any extension.

Finally, the refundable nature of the renewable tax credits would lower the levelized cost of wind and solar by at least another 5%, because simplified tax equity financing would lower the cost of capital.

Expanding transmission infrastructure is necessary for a zero-carbon future, but the American Jobs Act is unlikely to yield the envisioned interregional transmission lines on its own.

State-level permitting will remain challenging for transmission lines that hope to move renewable electricity from one area of the country to another. The focus on existing rights of way overlooks the need for expediting new rights of way, leaving interregional projects vulnerable to "not in my back yard-ism" and states' zero-sum perspectives of economic benefits. Although many projects seek to remain within existing rights of way for most portions of their routes, few are likely able to completely remain inside, exposing them to state-level permitting risk.

Purchasing around-the-clock clean power for, and consuming it at, federal facilities would encourage a diverse mix of renewable generation capacity and require some amount of energy storage. In 2019, the federal government consumed 52 TWh of electricity, which could be offset on an annual basis by 20 GW of utility-scale solar or 15 GW of wind.

However, the '24x7' constraint means a blend of wind and solar capacity will be needed, plus energy storage, to yield hourly clean energy that mostly matches end-use consumption patterns. In fact, an overbuild of renewable capacity would likely be needed, which could yield excess renewable generation for the broader power market.

Notably, renewable development could be bolstered in states where renewable deployment has lagged because of the location of federal buildings. For example, Georgia, Virginia, Florida, and Maryland are home to an outsized share of federally owned floorspace, meaning PJM and SERC could see incremental renewable investment tied to federal procurement.

While only mentioned in brief, a national clean electricity standard that sets the country on a path toward zero-carbon electricity supply by 2035 would be more stringent than any state decarbonization law, and it would dramatically accelerate renewable deployment. However, garnering fifty votes in the US Senate, or perhaps even bipartisan support, would likely require compromises as legislation is drafted.

Extending, and adding, power-related tax credits are among the more likely elements of the American Jobs Plan to eventually become law. Historically, both political parties have voted to adopt and extend renewable energy tax credits. Doing so again, whether as part of an infrastructure bill or through another piece of legislation, would be consistent with recent history.

Ultimately, the American Jobs Plan is an opening bid in what will surely be a dynamic and contentious process—and it signals the Biden Administration is looking to implement the rapid clean energy transition it campaigned on. If enacted in full, the plan would represent the most aggressive federal climate response to date—but substantial revisions can be expected.