Better diabetes treatment can save Medicaid over $4 billion per year

Diabetes is one of the most prevalent and expensive medical conditions in the US, especially among people with low socio-economic status. As the primary health insurer for low-income people in the US, Medicaid is estimated to cover more than 15% of all diabetes patients on their treatment costs.

An analysis of National Health and Nutrition Examination Survey (NHANES, 2007~2012) showed about 13% of Medicaid adult beneficiaries have diabetes. Most them also have other comorbidities such as: hypertension, coronary artery disease, stroke, and heart attack. Better management of diabetes can improve patient health outcomes and reduce medical costs, especially among those with blood glucose level not well controlled.

By simulating the impact of well controlled biometrics on Medicaid enrollee samples from 50 US states with our Disease Prevention Microsimulation Model, we estimated each treated diabetes patient could save $845 ($308 ~ $1490 varied by states) per year in medical expenses as the result of significantly reduced onset of complications over 10 years. Among the subset of patients with uncontrolled glucose level, average per capita saving is almost $1,000 ($361 ~ $1,698 varied by states).

How six states stack up on savings 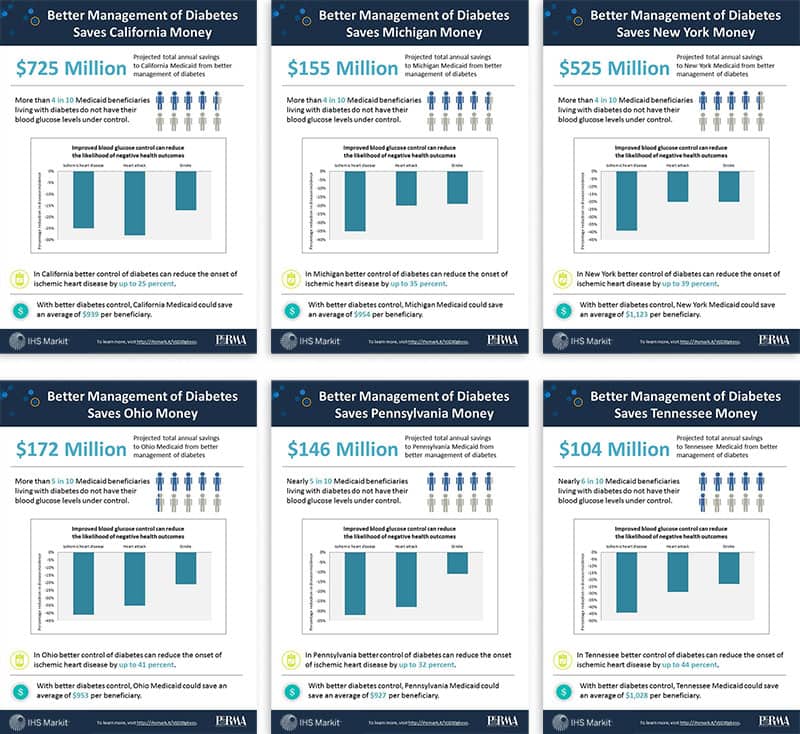 Overall, we projected better diabetes treatment can potentially reduce Medicaid health care spending by over $4 billion per year. Download the state-by-state results to see the full scope of possible savings. In addition, you can read our whitepaper on the clinical and economic benefits of better treatment of adult Medicaid beneficiaries with diabetes.

Frank Chen is a Principal Consultant with the Life Sciences practice at IHS Markit.
Posted 9 November 2017