Bayu-Undan, DLNG and Barossa – How the energy transition is shaping the future

Since the mid-2000s, the Bayu-Undan field has reigned supreme in the Bonaparte Basin, supplying gas to the Darwin Liquefied Natural Gas (DLNG) plant onshore Northern Territory, Australia. However, the time for change is quickly approaching, with the Barossa field lying in wait, ready to take the reins to continue supply to the plant. With the hydrocarbon industry being acutely aware of the need for carbon capture and storage (CCS) in a bid to lower carbon emissions and achieving the much-desired carbon neutral status, Bayu-Undan looks set to become a CCS hub for the region, with Barossa development plans looking set to change as a result. This piece will provide an overview of the Bayu-Undan-Barossa transition, which plans are up for change, and what the resultant implications are for carbon capture.

With operators globally striving for carbon neutral status, carbon management is essential. CCS, is the process which mitigates the release of carbon dioxide [CO2, a greenhouse gas (GHG)] into the atmosphere. CO2 can be captured from emissions from industrial sources such as power plants (post-combustion) or from feed gas from fields (pre-combustion), which can then be injected underground into geological formations for storage. There are numerous ongoing or planned projects in Australia implementing CCS to lower emissions. Carbon Capture, Utilization and Storage (CCUS) brings in the utilisation aspect, whereby the CO2 can be used, with or without storage. CO2 uses include plastics, refrigerants, chemicals, beverages and urea. An example of utilising whilst storing includes enhanced oil recovery (EOR) via CO2 injection into producing oil reservoirs or enhanced water recovery.

The International Energy Agency has previously stated that without CCS, reaching net zero/carbon neutral goals will be almost impossible, with Australia and the region certainly being proactive in this space. As mentioned, there are numerous projects both operational and planned where CCS/CCUS is being implemented, with the government also introducing initiatives such as carbon credits to incentivise the developments and make them more economic. The Australia Federal Government also recently closed bidding in its 2021 Offshore Greenhouse Gas Acreage Release in March 2022, with strong interest received in the round where five blocks were being offered across the Bonaparte, Browse and North Carnarvon basins. Subsequent title holders will be required to provide a detailed understanding of the characteristics and extent of the storage formation and plume migration. Eligible storage formations should be suitable for the injection of at least 100,000 tonnes over the life of the project. Once a feasible GHG injection project gains approval, a GHG Injection Licence will be awarded. The 2021 round was the third round of its kind but the first since there have been emission targets for Australia, which are targeting to reduce GHG emissions by 26% to 28% below 2005 levels by 2030, and net zero by 2050. Carbon capture technologies are also one of five priorities under the 2020 governmental technology investment road map.

Bayu-Undan, which is operated by Santos, is located within the Bonaparte Basin in East Timor waters. The gas field, discovered by Bayu 1 in 1995, has been producing for over 18 years starting in 2004 via liquids production (phase one-gas recycling), with sales gas production following in 2006 (phase two). The field, which is made up of Jurassic reservoirs, produces gas via subsea pipeline to the onshore DLNG project located at Wickham Point, Australia for conversion into liquefied natural gas (LNG) for export (3.7 MMtpa capacity, one train). Condensate and Liquefied Petroleum Gas (LPG) are processed and stored at the Bayu-Undan field via the processing facilities and Floating Production Storage and Offloading (FPSO) vessel. End of life for the field is scheduled for 2022/2023 which represents an extension due to the recent Phase 3C development that saw three wells being drilled targeting gross 2P reserves of 23 MMboe, with a gross capex cost estimated at USD 235 million. Drilling began in late May 2021, with first production from this latest phase in July 2021.

When production does come to an end from this historic field, next to step up to feed the DLNG plant is the Barossa field located in the Australian waters of the Bonaparte Basin, approximately 400 km northeast of Bayu-Undan. Barossa however, which took final investment decision (FID) in March 2021, is planned to come online in 1H 2025 causing a plant production hiatus of around 2 years. The multi-TCF Barossa field was originally discovered in 1999 and also holds its gas within Jurassic reservoirs.

All is not over for Bayu-Undan though with operator Santos recently announcing, in March 2022, that Front End Engineering and Design (FEED) for the proposed CCS project at the field had commenced. The project plans to store up to 10 MMtpa of CO2 at Bayu-Undan. FEED will include work on further CO2 processing capacity at DLNG, as well as the repurposing of Bayu-Undan field facilities for CO2 storage after production ends. A potential source of CO2, which is discussed below, is the gas stream from the Barossa field as well as other projects in the region. With FEED entered, it is hoped FID will be reached in 2023. However, it must be remembered that even if Bayu-Undan is repurposed for CCS, Santos would still keep its decommissioning liability for the field which is also a consideration for CCS project economics.

Barossa development - A change of plan?

As mentioned, Barossa was granted FID in March 2021. The basis of that investment decision is a development concept comprising an FPSO, subsea production system, supporting infield subsea infrastructure, and a gas export pipeline. Six production wells are planned prior to start up, with previous proposals suggesting a later second phase of four to seven wells to increase production. The FPSO is to be the central processing site to stabilise, store and offload condensate, as well as treat, condition and export produced gas. The dry gas will be exported from the FPSO through a new, as it stands, 260 km pipeline (26 inch) tying into the Bayu-Undan to Darwin gas export pipeline. The pipeline will then transport the gas to the DLNG facility. Barossa is designed to deliver average LNG production of around 3.5 MMtpa, with first gas as mentioned planned for 1H 2025.

However, since FID, pipeline plans have changed. In January 2022 Santos had its Darwin Pipeline Duplication (DPD) project opened for public comment by the Northern Territory Environment Protection Authority. The project proposes to extend the Barossa gas export pipeline to run all the way to DLNG, rather than have the planned Barossa pipeline tie into the Bayu-Undan gas export pipeline for subsequent gas delivery to DLNG. The plans will allow the preservation of the Bayu-Undan export pipeline so it can be repurposed to transport Barossa CO2 from DLNG to the Bayu-Undan field as part of its retirement plan CCS hub vision. The extension is made up of a 23 km segment in Commonwealth waters, as well as a 100 km segment in Northern Territory waters and land. The new proposed segments will lie parallel to the Bayu-Undan pipeline, mostly around 100 metres apart, with the 100 km segment also importantly allowing third party gas tie-in. FID for the plans is targeted for 1H 2022. If the proposal is unsuccessful, or not reached in a timely manner, Santos will continue with the original pipeline plans. Reverting to the original base case plans carry with it the intent to route processed CO2 to the atmosphere via the FPSO. CO2 levels at Barossa average 18%, with planned FPSO CO2 removal membranes to achieve around 6% for the export gas. Potential CO2 emissions are thus significantly reduced if the DPD project and Bayu-Undan CCS are sanctioned, allowing the carbon to be captured. In comparison, and further justification for carbon management, is that when Barossa is compared to other sources of gas in the region which feed LNG plants - such as Ichthys, Wheatstone, Pluto and Gorgon - Barossa tops the charts as the dirtiest.

The sanctioning of the Barossa project back in March 2021 was great news for the region, welcoming a new source of gas and securing future years of service for the DLNG plant. However, with current attention being given to the energy transition, its plans for its carbon management had to change. As outlined globally, CCS is essential in the path to a cleaner energy future, and with the proposed DPD project, Santos is aiming to hit the ground running from first gas at Barossa. It must be said however, even if the DPD project is rejected and the CO2 is vented, it's hard to believe in the current climate of emission reduction that the project would continue that way for long. What is for sure in this scenario is the huge additional investment that would be needed after first gas when the existing Bayu-Undan pipeline is in use for sales gas transport, and additional infrastructure is needed to send the CO2 to Bayu-Undan after venting at the FPSO is most likely banned, assuming the CCS hub is sanctioned.

If in fact the DPD project and the CCS hub gets the green light and CO2 is sent to Bayu-Undan via the existing pipeline, the CCS hub vision will be in full flow, where third party gas also has the potential to be tied in and have further CO2 eventually sequestered. This additional third party gas option will also help the economics of the proposed CCS hub; But more importantly, along with Barossa CO2, it will help climate change.

Further information on how the energy transition is relating to and impacting the oil & gas industry worldwide, is available via our Upstream Intelligence solutions. 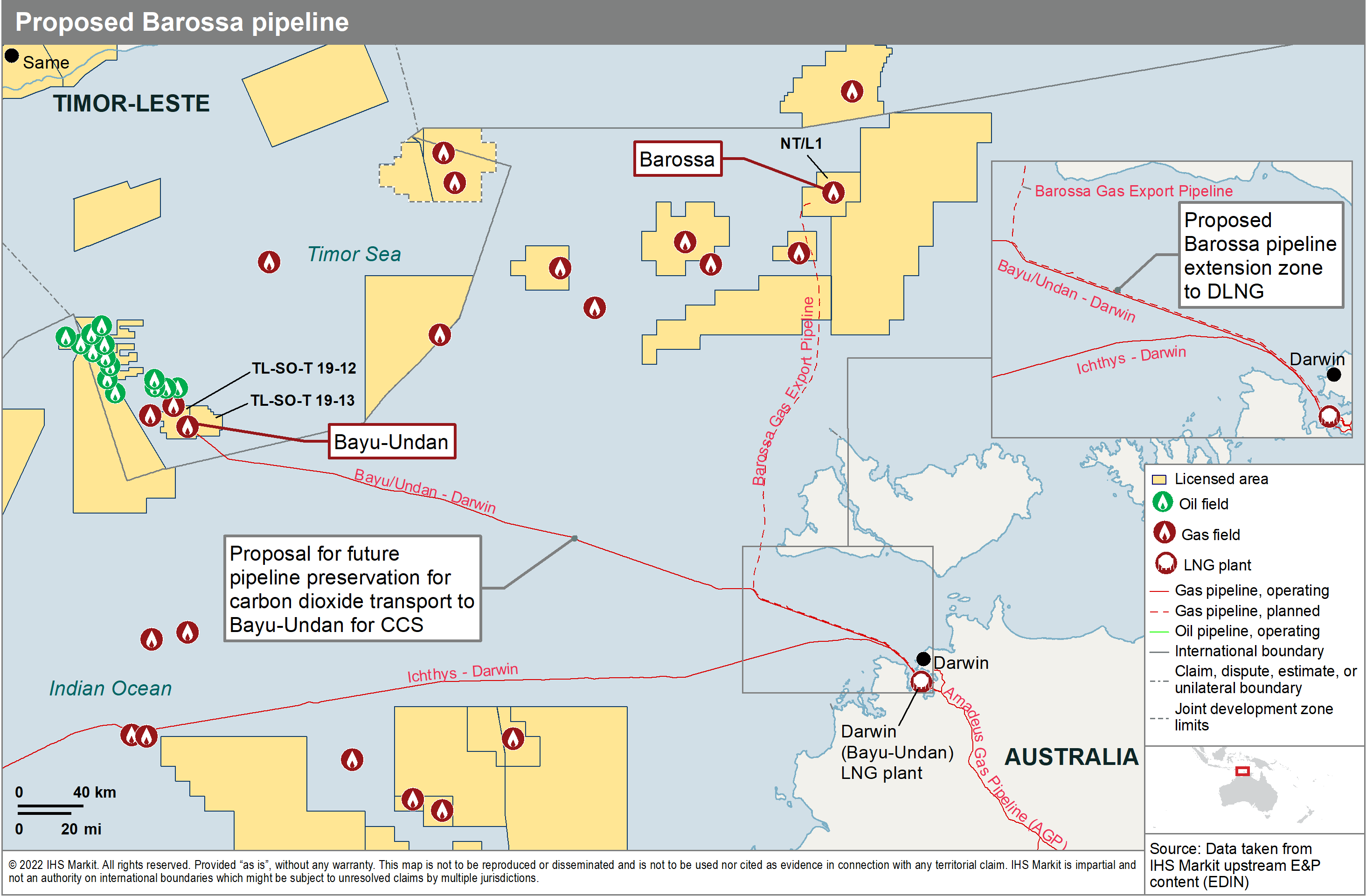