Building on our top themes to watch in global banking for 2022, we explore the key issues, trends, and developments that are likely to change the risk outlooks for banks at a regional level.

For 2022, risks and uncertainty remain heightened, leaving banks and banking sector regulators in a "wait-and-see" position. The sizeable support measures introduced early in the pandemic are largely being phased out or have already been removed, many in the latter half of 2021. Against a background of tightening global monetary policy, high inflation, expected slowdown in the macroeconomic recovery, and new COVID-19-related uncertainties, 2022 will test how successful these measures truly were - if they prevented businesses from failing or just delayed recognition of new NPLs. 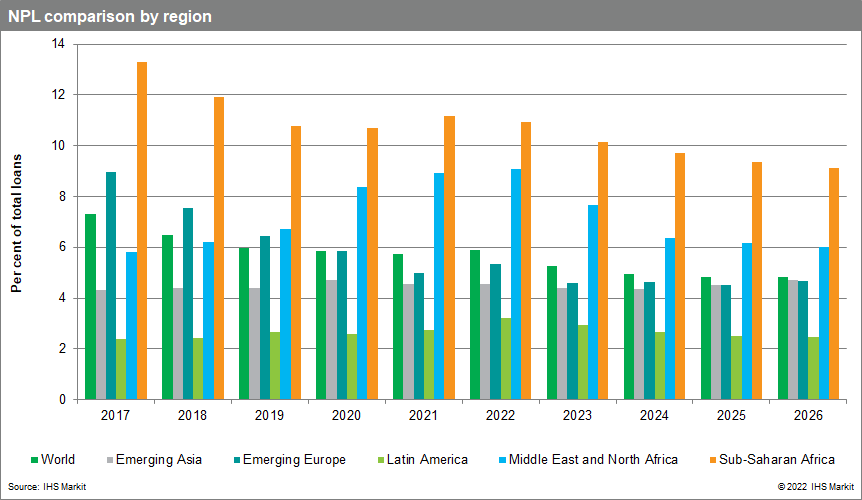 Most economies in Asia are either elongating loan-repayment assistance programs or creating new hybrid systems to restructure loans to reduce stress on borrowers, especially in the face of renewed lockdowns in more developed economies amidst new COVID-19 variants. Economies that had hoped to reopen their borders to tourists will likely see brief improvements in loan repayments reversed. Thailand, for example, which reopened its border to tourists in November, quickly reported better loan-repayment rates as a result. With the Omicron variant forcing the introduction of tighter quarantine standards, this improvement will likely dissipate in 2022. Considering 20% of Thailand's GDP is linked to tourism, this is expected to raise fresh credit risk and potentially encourage authorities there, and in other tourism-dependent economies in the region, to reintroduce more relaxed lending standards to support the battered sector, further delaying the recognition of bad assets.

Some economies in Europe are vulnerable to a potential boom-bust scenario due to excessive house-price rises, strong and sustained mortgage growth, and the relatively high indebtedness of households, with the house-price rate accelerating the most in Estonia, Czechia, and Lithuania during the first half of 2021. Potentially sharp corrections in house prices would result in higher defaults and credit losses, with negative spill-over effects on other sectors. Regulators in Bulgaria, Czechia, and Romania are the first to announce countercyclical measures to curb household lending growth, phasing in higher countercyclical capital buffer requirements from mid-to-late 2022. Other regulators are expected to deploy similar measures if housing prices and household credit continue rising at a fast clip and the introduction of tighter borrower-focused measures such as lower loan-to-value limits cannot be ruled out.

Political changes and elections will likely affect foreign exchange volatility and the structure of banking sectors.

In economies such as Costa Rica and Colombia, upcoming elections will likely increase foreign exchange volatility, particularly if the winning candidates support a more interventionist agenda. Although in Colombia the exposure of the banking sector to foreign exchange is limited, Costa Rica is more likely to be affected given its high levels of dollarization in both its credit portfolio and deposits. In the case of Chile, there will be a referendum in mid-2022 to change the current constitution. The draft text of this has not been released, but there is some likelihood that the structure of the financial sector will be changed, particularly through the revision of the private pension system and the role of the central bank. Such measures would have a substantial effect on the funding of Chilean banks and the regulatory structure governing them.

While state ownership of local banks is expected to remain dominant throughout the Middle East and North Africa region, two economies - Algeria and Egypt - have previously committed to reduce the role of state-owned banks in their respective sectors and could take additional steps towards that goal in 2022 as they seek to supplant revenue lost because of the COVID-19 pandemic. These privatization drives have so far been slow to materialize and have lacked detail but are likely to consist of authorities offering minority stakes in select state-owned banks. Such deals have proven less attractive in recent years but could garner interest from large Gulf banks looking to increase their foothold in North Africa, increasing competitiveness in the sectors if accompanied by independent audits of state-owned enterprise debt and recapitalization.

Increased holdings of government securities could translate to increased exposure to sovereign risks.

Delays in fiscal consolidation across the region raise concerns for private-sector credit recovery and increase bank-sovereign linkages. The region's public debt load has increased significantly, with banks taking up a larger share of domestic public debt. For instance, the Kenyan government sources around 50% of its domestic debt from the banking sector. Banks across the region diverted their portfolios towards the perceived safety of more liquid public assets during the COVID-19 pandemic. IHS Markit experts expect banks' risk appetite to stay muted as NPLs rise, boosting their holdings of government securities and increasing their exposure to sovereign risks. Economies like Ghana, Angola, Kenya, Uganda, Zambia, and South Africa are worth monitoring in this regard.