Mainland Chinese authorities are likely to extend the mortgage-loan relaxation to other key cities after doing so for Guangzhou. The cut in the medium-term loan prime rate signals an easing of loan conditions, and it is highly likely that the easing will be widespread and will be focused on low-risk borrowers such as homebuyers rather than investors. 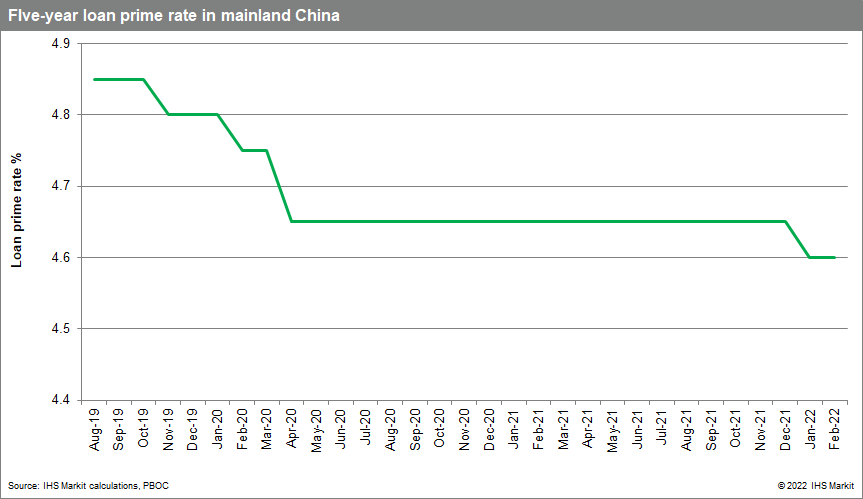 The Indian government has announced through its budget for fiscal year (FY) 2022/23 that it will not be injecting any capital into state-owned banks. Instead, it is looking to start an IPO of Life Insurance Company of India; this indicates the state-owned insurance company - which also holds stakes in many state-owned banks - will be partially privatized. The lack of capital injections this year suggests that the privatization of several state-owned banks will be completed in FY 2022/23. At the end of 2021, Bangladesh authorities had shown willingness to relax the minimum loan-repayment requirement for a loan to be classified as normal; this policy will likely continue into 2022. Although the regulators may show resilience and a strong stance towards better loan classification, in the beginning, our experts expect these will once again relax. We expect the non-performing loan (NPL) ratio to remain around 8.3% for 2022. 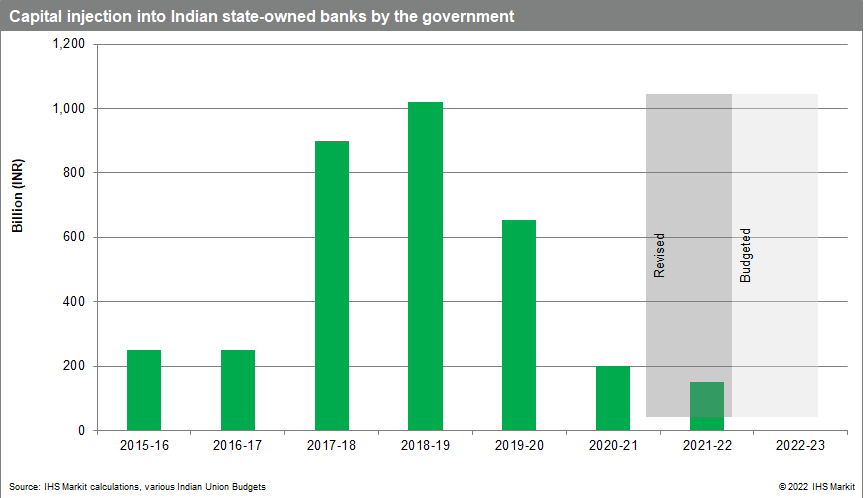 Banking sectors in Europe are exposed to various residential real estate-related vulnerabilities, including strong mortgage lending, elevated house price growth, house price overvaluation, high indebtedness, and signs of loosening credit standards. Authorities have already started to take action to address residential real estate-related vulnerabilities via policy tightening; Bulgaria, Croatia, Czechia, and Romania have indicated increases in countercyclical capital buffer (CCyB) rates between 2022 and 2023 in an effort to slow mortgage lending rates. Other borrower-based measures or targeted capital-based instruments such as a systemic risk buffer are likely to be activated or tightened by European authorities as a preventive action.

Debate on bill that would change liquidation processes in Panama.

We expect further developments on bill 165, which is currently being discussed in the National Assembly of Panama. The bill intends to modify the terms in which liquidations are performed in the country. The current draft of the law would require banks to use the market value (rather than the auction value) for goods given as collateral in loans. Additionally, it would require banks to give the difference between the value of the good and the outstanding balance of the borrower. In turn, if this law is passed under current conditions, it could diminish the capacity of Panamanian banks to disburse loans given higher risk of losses despite the existence of collateral. It would also affect profitability over the short and medium terms because of limited capacity of recovering loan losses and a likely increased reliance on provisioning. 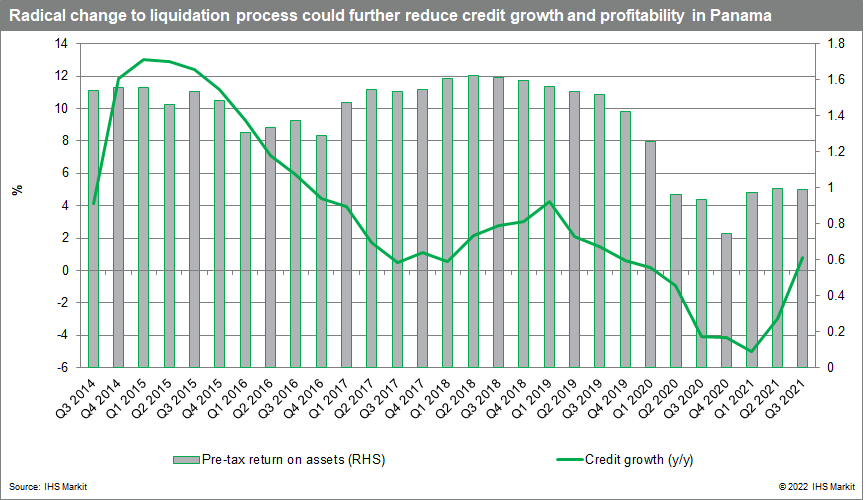 Gulf states are likely to phase out remaining COVID-19 support measures at a faster pace given the boost these economies are receiving from higher oil prices and the relative stability of financial soundness indicators during the pandemic. Saudi Arabia is unlikely to further extend its loan-payment moratorium, currently set to expire at the end of March, in our view, as NPLs remain very low. Oman and Qatar previously extended some loan-payment moratoriums to December 2022 and 2023, respectively, while moratoriums in Kuwait and the United Arab Emirates have already expired. We expect Kuwait to announce a phased rollback of its remaining capital conservation buffer and risk weight forbearance. In the UAE, forbearance on banks' capital buffers, liquidity, and stable funding requirements, set to expire in June, are also likely to be phased out, but more gradually in light of that sector's much higher NPL ratio and slower credit growth. In anticipation of further rollback of forbearance, we expect banks will continue raising extra capital and provisions to enhance capital buffers and absorb potential loan losses. Uganda is expected to release its December 2021 Financial Stability Review, likely to reveal the first impact on asset quality following the end of forbearance measures in September 2021. Thus far, asset-quality risks have been contained through forbearance measures, reflected by the sector's NPL ratio, which stood at 5.4%, the same level as in the beginning of the pandemic. IHS Markit analysts project the NPL ratio will start to increase gradually in 2022, as some of the restructured loans materialize into NPLs, negatively affecting loan growth. IHS Markit is forecasting year-on-year loan growth of 5.4% and 6.6% for 2021 and 2022, respectively, for Uganda, versus year-on-year loan growth of 15.4% in 2020. 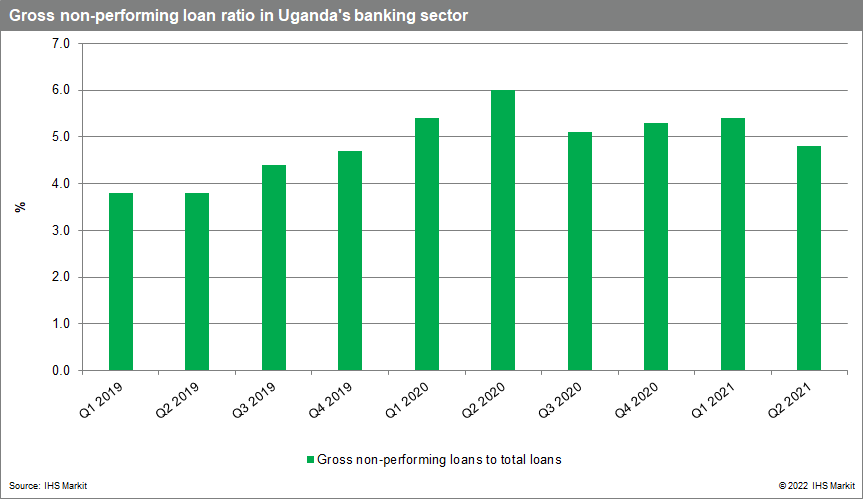