The support for large and strong real estate companies to borrow, in order to purchase projects from weaker real estate firms since the start of 2022, will likely continue. However, the main focus of the central government and financial regulator will continue to be maintaining stability of the financial system. As such, more support for individual borrowers is likely, with banks being encouraged to increase mortgage lending growth through expansive monetary policy, such as the medium-term loan prime rate cut in the first quarter. 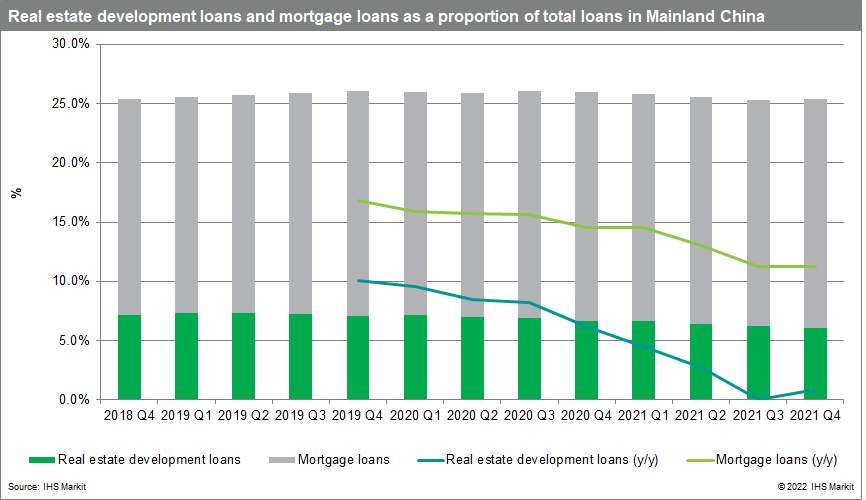 By the end of March 2022, banks are likely to have transferred INR503.4 billion worth of bad loans (around 0.5% of total loans) to the National Asset Reconstruction Company (NARCL). The next batch of bad loans, worth INR320 billion, is scheduled to be transferred during fiscal year 2022/23 (March 2022 to March 2023). We expect that more bad loans will be transferred to the NARCL considering that the downstream operations of the bad bank are quickly taking shape, allowing it to resolve more bad loans. 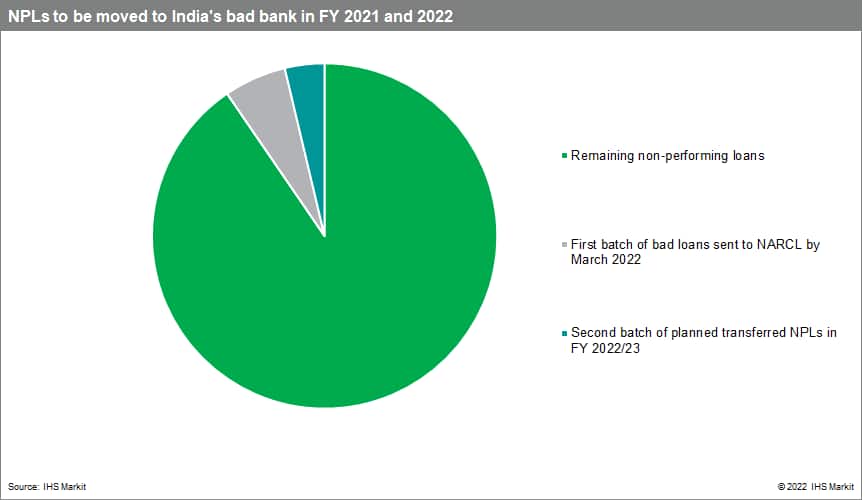 Turkey, along with much of emerging Europe, is going to be negatively affected economically by the Russia-Ukraine conflict via lower growth and a higher external imbalance that will put pressure on Turkey's sovereign position and currency. Higher oil prices, lost agricultural exports to both Russia and Ukraine, and the lack of a bounce back in tourism revenue will weigh on economic growth this year. This is likely to put upward pressure on banks' NPLs and could yield slightly lower roll-over ratios on foreign debt, but overall we expect investors to differentiate between Turkey's well-established structural vulnerabilities and the unique circumstances surrounding Russia's external debt vulnerabilities. 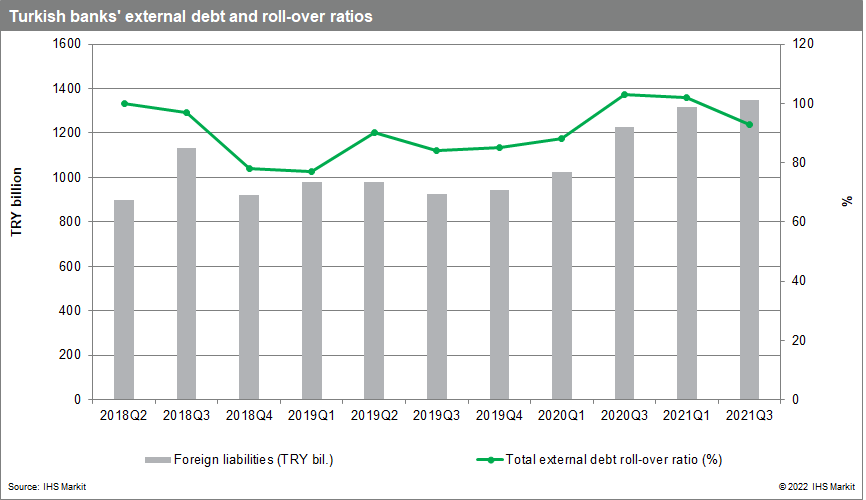 Deterioration of banks' expectations on profitability, credit growth, and asset quality because of the weakening economic environment in Latin America.

With lower economic expectations in most Latin American countries, banks already perceive increased weaknesses in their respective markets. Chile, for instance, has revealed that lending standards tightened and credit demand declined significantly through the first quarter of 2022, particularly in the corporate segment. So far, Russia's invasion of Ukraine has not affected these sectors to a significant degree. However, persistent global uncertainty will induce changes in banks' actions through the course of 2022. Data releases for the first quarter of 2022 will further reveal the outlook on profitability, credit growth, and asset quality for the whole region. 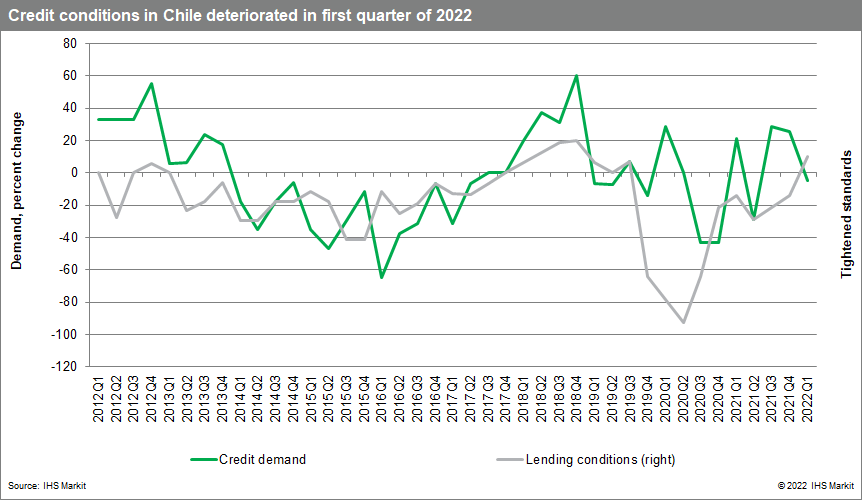 Since mid-March, the standoff between banks and judiciary authorities has escalated after a series of judicial rulings that resulted in the freezing of assets at some banks and forcing others to repay non-resident depositors further hampered the Lebanese banking sector's daily operations. The banking sector is demanding Parliament formally adopt a capital control law, which essentially puts exceptional and temporary restrictions on bank transfers and cash withdrawals for three years to protect the banking sector's liquidity. The draft capital control law is currently being debated and was formally endorsed by the Cabinet on 30 March. We expect meaningful progress to be achieved on the capital control law in April, ahead of the elections in May. 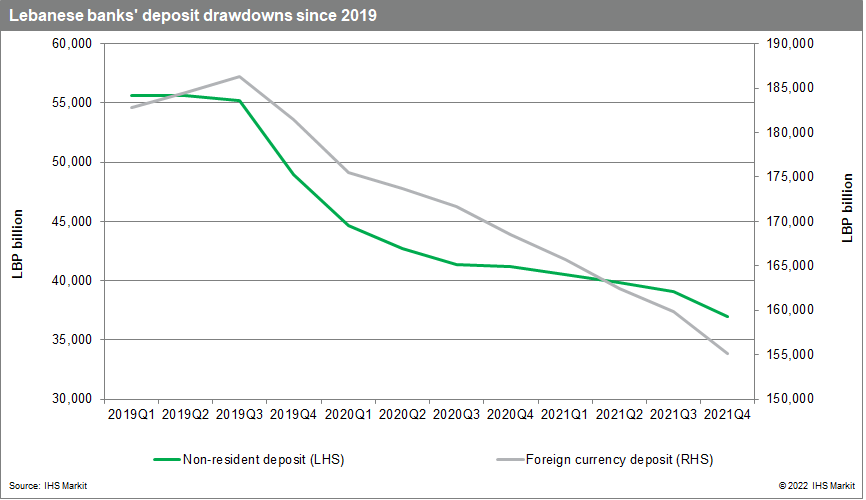 Zambia's official creditors expected to form committee to determine amount of debt relief to be provided; likely will take pressure off commercial banks to take on additional government debt.

The committee is expected to advise the exact amount to be provided as debt relief at the end of April 2022, a necessary step to pave the way for Zambia to conclude a much-needed International Monetary Fund (IMF) deal. Access to the IMF credit facility and possible debt restructuring will likely improve Zambia's debt sustainability and lessen pressure on commercial banks to take on additional government debt, which crowds out private-sector lending. Year-on-year loan growth is expected to decelerate to 8.2% in 2022, compared with year-on-year loan growth of 20.9% in 2020. At the end of 2021, Zambian banks held about 26.3% of total assets as sovereign debt holdings, up from 23.2% in the same period in 2020. 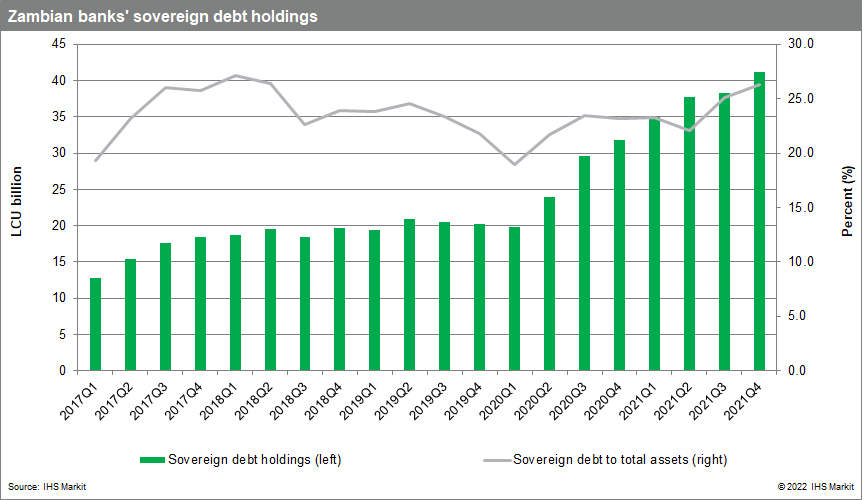