On 22 October, the CBR's Board of Directors lifted its key rate by 75 basis points (bp) from 6.75%. The move followed a 25-bp increase in September and marked the sixth rate tightening since the start of the year. The accompanying press note by the Board of Directors after the rate-setting meeting was not dissimilar to those issued in the past months. The bank reiterated that inflationary pressures are rising.

Demand continues to outstrip output expansion capacity. The deviation of the headline inflation from the CBR's target of 4.0% will persist. The only difference was the CBR's decision to increase its annual inflation forecast to 7.4-7.9% by end-2021. The bank kept annual average inflation at 4.0-4.5% in 2022.

The surge in consumer prices through September and the first half of October was a key trigger for CBR's decisive move to anchor consumer inflation expectations. Specifically, detailed monthly inflation data released by the Russian Federal State Statistical Service (RosStat) showed a jump in the headline inflation to 7.4% year on year (y/y) in September from 6.7% in August, and 6.5% in June-July. 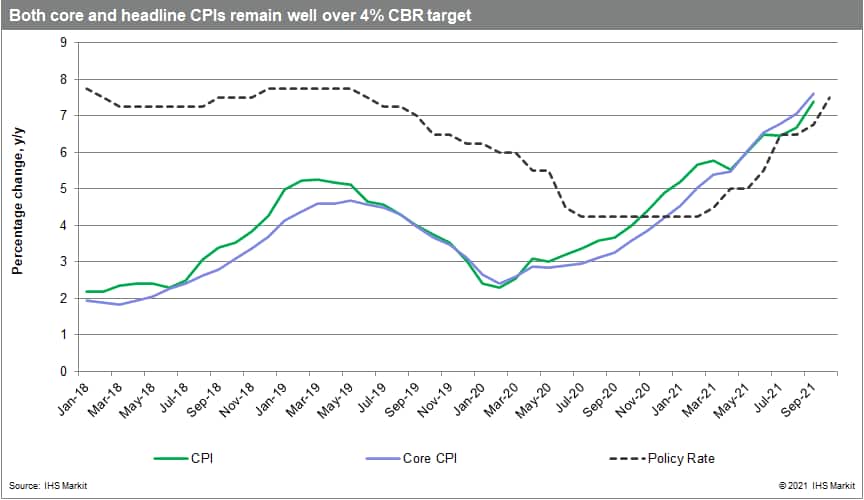 Both commercial and consumer borrowing remained significant. Still, there were also small inflows of funds into fixed-term rouble deposits, a trend that the bank expects to solidify in the coming months due to its monetary policy.

As expected, after a substantial rate hike the Bank of Russia took a break until 17 December. Currently, the disinflationary risks appear on the rise, giving the bank some breathing space. Specifically, the inflationary impact of the one-off social payments is fading. The rouble's stability limits import price inflation risks.

On the flipside, worsening pandemic and the lockdown could trigger yet another round of domestic supply disruptions and related price increases. Therefore, further policy tightening is still on cards but should they happen, the rate hikes will be smaller and wider paced. 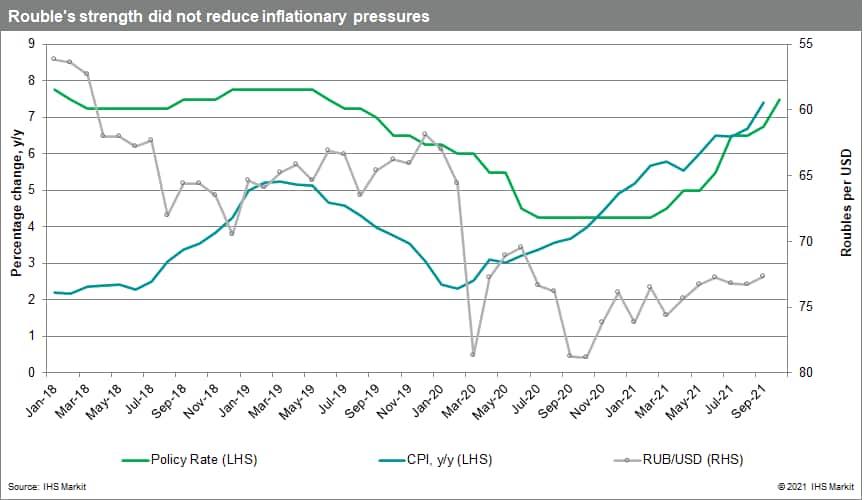