The Monetary Policy Board of the Bank of Korea (BOK) voted to cut interest rates by 25 basis points at the July meeting, an earlier-than-expected move that caught many analysts by surprise. Recent data showed shrinking export volumes, painting an increasingly gloomy outlook for the trade-reliant South Korean economy. 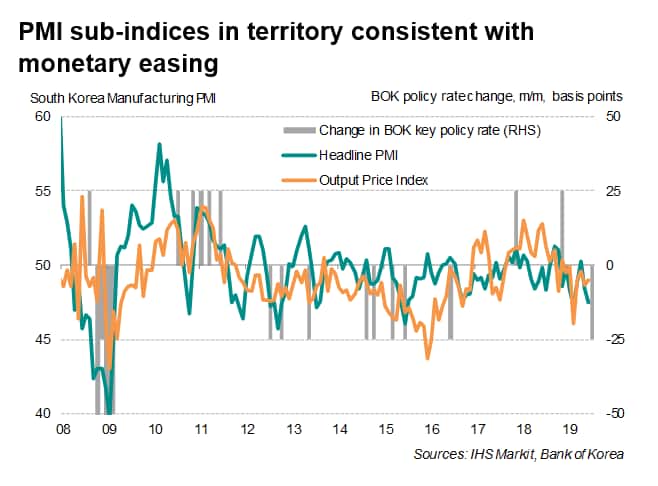 Supporting economic growth has become the main motivation for greater monetary support. The economy is losing growth momentum, as indicated by the latest PMI surveys. The average PMI reading for the second quarter (48.7) was the second lowest over the past two-and-a-half years, indicating that economic growth in the three months to June remained subdued. This is likely to be confirmed by an advance release of second quarter GDP numbers next week, which IHS Markit forecasts to show the rate of economic expansion to moderating further to an annual rate of 1.4%, down from 1.6% in the first quarter. 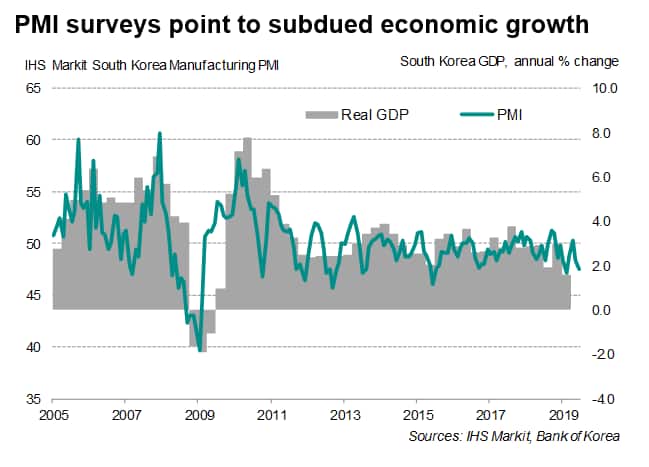 The BOK also expects weaker GDP growth this year. Alongside the rate cut decision was an update to the central bank's economic outlook. The central bank revised down its full-year growth forecast for the economy to an annual rate of 2.2%, down from a forecast of 2.5% in April, amid rising external headwinds.

Deteriorating trade conditions, which were brought about by a combination of a softening tech cycle and rising US-China trade tensions, adversely impacted South Korean export performance. The latest IHS Markit PMI surveys pointed to a further contraction in new export orders in June, a trend that has been apparent for nearly a year.

Official statistics meanwhile indicated the deepest contraction in exports since the start of 2016 during June. 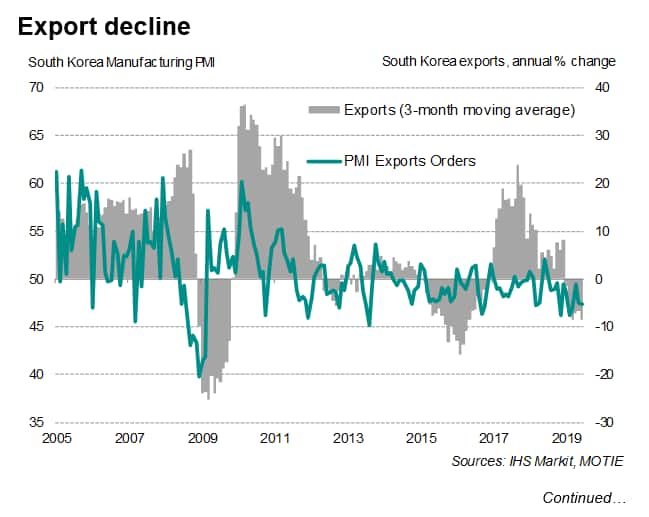 Adding to growing concerns over the deepening export malaise in South Korea were tighter curbs on Japan's exports of chemical materials used in smartphone displays and chips to South Korea, which is expected to disrupt the production of Korean technology goods. Japan has also hinted at expanding the export restrictions to include a broader range of items.

The BOK has limited room for policy manoeuvres despite a global shift to a dovish monetary stance. Lowering interest rates further could undermine financial stability, a concern the central bank had consistently highlighted previously amid elevated household debt. It is also uncertain the extent of the effectiveness of low interest rates in aiding export growth when the external sector is experiencing a supply shock in the form of Japanese export restrictions.

In this respect, calls are mounting for the policy mix to include fiscal stimulus. Indeed, BOK governor Lee Ju-yeol noted that active fiscal policy is needed. However, a USD 5.7 billion supplementary budget bill, brought forth in April to boost export growth, remained stuck in legislative limbo.