The Bank of England's Monetary Policy Committee (MPC) voted unanimously to maintain the Bank Rate at 0.1% at its June meeting.

The MPC also voted unanimously for the Bank of England (BOE) to continue with the existing program of GBP200 billion (USD248 billion) of UK government bond and sterling non-financial investment-grade corporate bond purchases, financed by the issuance of central bank reserves. In addition, after a majority vote of 8-1, the Bank will increase the target stock of purchased UK government bonds by an additional GBP100 billion, to take the total stock of asset purchases to GBP745 billion.

The extended QE announcement was expected after all the MPC members had agreed in the May meeting that further monetary support could be required and the minutes showed that all members accepted that the "the prospective weakness in employment and inflation, and downside risks around aspects of the medium-term outlook, might necessitate further monetary policy action".

With GDP shrinking by a cumulative 25% during March and April in the wake of the coronavirus disease 2019 (COVID-19) virus-related national lockdown, the door opened for the MPC to expand the new QE program.

The Bank wants to slow the pace of its QE purchases to complete the additional GBP100 billion by the end of this year. The total stock of the Asset Purchase Facility (APF) had reached GBP613 billion by 17 June, implying that an additional GBP162 billion of UK government bonds and GBP5.8 billion of investment-grade corporate bonds had been purchased since March. It will reach GBP745 billon by early July.

We had anticipated that the Bank would expand its bond-buying scheme by GBP100 billion, but it was at the lower end of market expectations, with some arguing for an expansion of GBP150-200 billion. In addition, the markets didn't expect the slower pace of the bond-buying program, or the BOE's chief economist's dissenting vote.

This could suggest that the Bank is at the upper end of its support, and even early signs of "bailout fatigue." Indeed, an emerging narrative from the MPC meeting is that "the hit to the economy would be less severe than initially feared". Indeed, the latest indicators suggest that GDP bottomed out in April, noting that payments data are pointing to a recovery in consumer spending in May and June. Importantly, it now expects "the level of GDP in the second quarter might be 20% below its level in the final quarter of 2019, rather than the 27% published in the May Report".

In its May update, the Bank said it expected the economy to contract by 14% in 2020, the largest drop on record since the Office for National Statistics (ONS) started compiling GDP data from 1949. A less negative view of the second quarter is likely to result in a lower projection for GDP contraction in 2020.

The Bank expects the economy to grow by 15% in 2021 and returning to its pre-virus peak by the middle of next year. The hope is that the government and Bank's financial and income support measures will limit any permanent scarring on the economy.

However, the Bank is likely to be more cautious about the pace of the economic rebound, acknowledging accumulating recovery headwinds. It notes an increasing risk of persistently higher unemployment, which sits uncomfortably with the prospect of entrenched precautionary behavior by households and businesses.

We expect the economy to contract by 11.9% this year before expanding by 4.9% in 2021. Clearly, our growth assessment for 2021 is more cautious, and reflects several downside risks. These include poorer labor market conditions, which will blight the pace of recovery in consumer spending decisions; lost productive capacity, with tourism and consumer-facing service providers most exposed; and the far-from-clear outcome of the current UK-EU trade negotiations. We expect the Bank to be in a holding pattern in the next few months.

After previously ruling out negative rates because of their impact on the banking system's capacity to lend, The Bank's governor is considering negative interest rates after the policy rate was cut to a 325-year low of 0.1%. However, negative rates remain unlikely, with modest changes in the cost of credit unlikely to revive limp demand for credit. In addition, the potential impact on bank profitability is a concern, with UK retail deposit rates unlikely to drop below zero.

The Bank is expected to refrain from further enhancement of its asset purchase program in the next few months. However, we acknowledge that a return to more QE could be triggered if the UK were hit by a second COVID-19 virus wave, triggering a second national lockdown. In addition, the termination of the Coronavirus Job Retention Scheme at the end of October could prompt a second wave of substantial job losses, leading to an even more elevated unemployment rate. 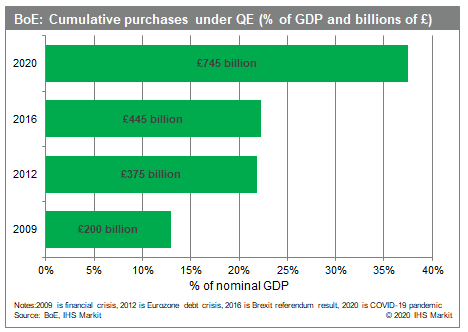