Bank of England: Remember, remember the fourth of November?

MPC signals tightening is on the way

There were various signals pointing in the direction of an early rate hike in September's MPC minutes, including:

A stitch in time?

The arguments favoring a rate hike as soon as November include:

Or play for time?

A November hike is not quite a done deal. Counter arguments against it include:

IHS Markit's October baseline forecast was for an initial hike in Bank rate in February 2022 (of 15 basis points to 0.25%), in tandem with the subsequent MPR, due to a perceived preference among a majority of MPC members to wait for more information. Still, it would not come as a major surprise if the move occurred in November, for the reasons highlighted above.

At the time of writing, the implied probability from OIS markets of a 15 basis point rise in November is greater than 50%. This removes one potential impediment to immediate action from the Bank of England: that it would come as a shock.

As we see it, it is merely a question of when not if the Bank of England starts raising policy rates. The discussion surrounding November's meeting is predominantly a strategic one. The potential benefits of acting sooner to prevent even more tightening later, set against a possible preference to wait and see given the various uncertainties surrounding the outlook at present.

How would markets react?

With a 15 basis point hike not fully discounted for November at the time of writing, it would push up the pound and short-term bond yields, though both have already risen recently as rate hike speculation has mounted, particularly the latter. 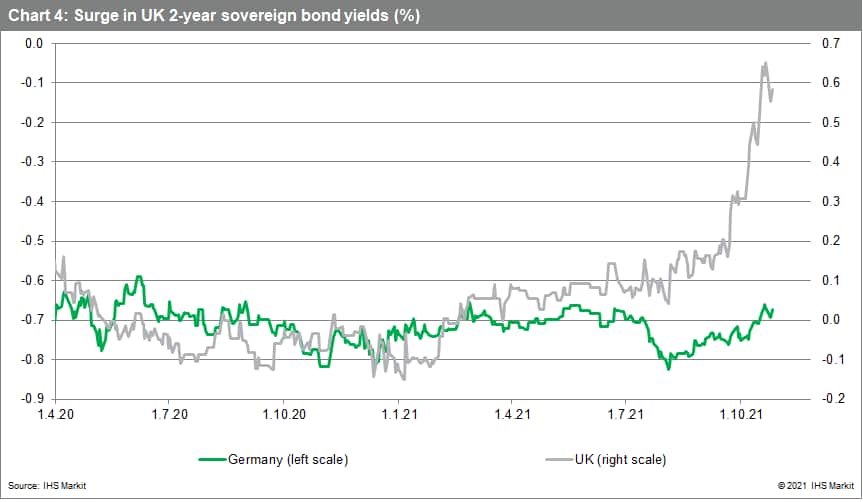 The voting from MPC members will be important. A unanimous 9-0 vote in favor of a hike in November would send a strong signal. But only a narrow majority in favor of a hike, with some members favoring a more cautious approach, could temper future rate hike expectations.

The accompanying communication from the MPC will also be pivotal. In the event of a hike, rate expectations for next year will likely shift higher in the absence of a clear signal that the MPC will be cautious in its withdrawal of policy accommodation and that by moving early, it is likely to deliver less tightening overall. In the event of no rate hike in November, any relief rally would likely be limited given the high likelihood that the MPC would signal that a rate hike would likely follow soon after.

Further out, the key longer-term issue is whether there is a risk of over-tightening and a possible hard landing for the UK economy as a result. Given various existing headwinds to UK growth, including soaring energy prices and future increases in household and corporate taxes in 2022-23, this to us increasingly looks like a genuine risk.

Markets appear to see it the same way, with the rise in 2-year rates leading to a marked flattening of the yield curve. This could change once the MPC's intentions regarding the unwind of QE have been made clear. But for now, the signals suggest that while the market expects a more aggressive Bank of England due to rising inflation, the UK economy is not resilient enough to take it.