There is a theory that by adding a model (to a brand or segment, for example), sales will go up. IHS Automotive new vehicle registration data indicate this does not always occur in the area of alternative fuel vehicles. The number of hybrid models in U.S. showrooms has increased every year from 2009 through this year, but their market share has not kept pace. Hybrid share actually declined from 2009 to 2010 and again from 2013 to 2014, despite an increase in model count during both these time periods. During the five year span from 2009 through this year, the number of hybrids available has almost doubled to 47, but their share has increased .6 percentage points, or 25% (all data are March CYTD).

The Prius is the most popular hybrid, as it has been in each of the past five years. Although its share of the hybrid market has declined from a peak of 55.3% in 2011 to 23% this year, this is somewhat deceptive as there are now four Prius's available versus just one five years ago. Today all Prius's account for about 40% of the hybrid category, down from the peak but still a formidable piece of the pie. Ford's two leading hybrids, the Fusion and C-Max, have moved in different directions, with Fusion hybrid deliveries climbing to almost 11% of the market while C-Max has dropped from 8% a year ago to 5% now. Six of the ten most popular hybrids are built by Toyota and two by Ford. Chrysler LLC, American Honda, and Nissan are not represented in the 2014 list of leading hybrids. 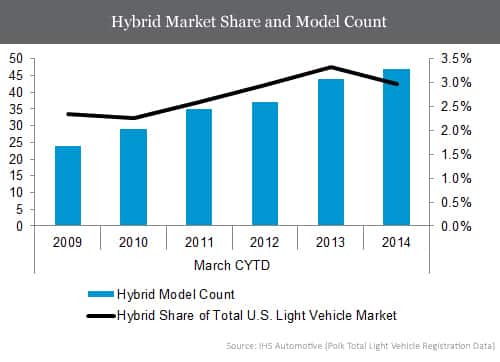 Autology Podcast: How much driving range will the A/C drain on my #EV? Our experts aim to find out what the new i… https://t.co/XaugA8u8Ba

#Automakers are finding ways to ration limited chip supplies and maintain sales. Some are excluding features such a… https://t.co/YtW87YXIlY