The federal government's energy policy sets out objectives to provide a reliable, secure, and affordable energy supply while meeting international commitments to reduce emissions. In the electricity sector, the government aims to maintain and increase the supply of low-cost reliable electricity via investments in transmission infrastructure as well as backing gas-fired generation and pumped hydro generation to provide firm power to the grid. The federal government's gas policy aims to increase domestic gas supplies by incentivising investment in the sector and partially developing gas infrastructure if the private sector does not generate projects by its own accord. In support of new low emissions technologies, amongst other initiatives, the federal government is backing development of a hydrogen industry through the National Hydrogen Strategy, which estimates that the industry could generate over 8,000 jobs and A$11 billion a year in GDP by 2050.

Guiding these policies is the Technology Investment Roadmap, an investment framework to accelerate the development and commercialization of low emissions technologies. The road map identifies priority areas for investment: clean hydrogen, energy storage, low carbon steel and aluminium, carbon capture and storage (CCS), and soil carbon. Reluctance to rule out support for coal in the federal government's low emissions strategies highlights continued backing of the coal industry under the administration of Prime Minister Scott Morrison.

In 2015, the federal government first communicated its commitment to reduce carbon emissions by 26% to 28% below 2005 levels by 2030, a target adopted under the Paris Agreement in 2016, and formally renewed in December 2020 without any changes. The Morrison government has touted Australia's progress toward emission reduction with 2020 greenhouse gas inventory data showing emissions 19% lower than 2005 and proclaiming emissions per person are at their lowest levels in 20 years. However, the details within Australia's national greenhouse gas inventory data show the overall reduction is largely from a change in land use that has been financially supported through issuing carbon credits. The IHS Markit long-term outlook indicates Australia's emission levels will not reach the Paris Agreement target of 26% below 2005 until 2040. 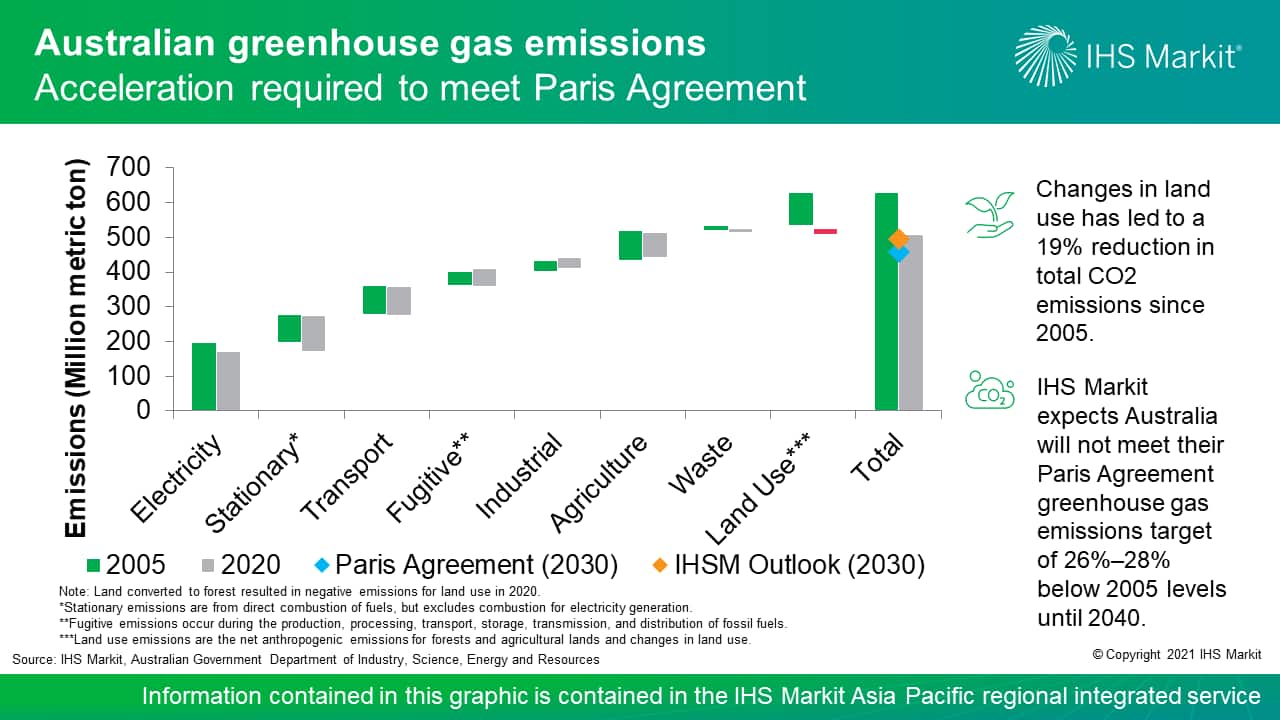 State and territory energy policy shares some aspects of the federal policy, although each state has put forward its own long-term ambitions. Unlike at the federal level, renewable electricity has been the forefront of state development plans. Most states have set renewable generation targets with Queensland, Victoria, and Northern Territory aiming for 50% of their generation from renewable sources, while South Australia, Tasmania, and Australian Capital Territory have set more ambitious goals of 100% or more. All of Australia's states and territories have committed to net-zero emissions by 2050, though states whose economies are heavily reliant on the resource sector (such as Western Australia) or manufacturing (New South Wales) focus on jobs, industry, and corporations in documents supporting net-zero targets, rather than the global issue of climate change.

Australia's private sector is pushing forward its own climate and renewable energy goals through corporate social responsibility initiatives. The growing importance of environment, social, and governance (ESG) policies in the Australian corporate sector is driving a significant transformation in project financing and asset allocation by financial services firms, including banks, insurance companies, and pension funds. This increasing adoption of ESG policies by Australian companies is affecting investments across Australian capital markets, including project financing, equity markets, and debt capital markets.

The outlook for change in energy and climate policy at the federal level is therefore driven primarily by the private sector, as well as by individual states and territories. The coalition government led by Prime Minister Scott Morrison is likely to announce new policies on climate and renewable energy in the coming months, although these would probably remain closely tied to existing gas-led recovery plans, investment in low-emissions technologies, and state support for hydrogen production.

Logan Reese is an associate director on the Asia Pacific Regional Integrated team at IHS Markit, focusing on Australia power and gas markets.

Hannah Cotillon is a senior analyst in the Country Risk team at IHS Markit.

Asees Bajaj is a senior analyst with the E&P Terms and Above-Ground Risk team at IHS Markit.