Amid an easing of COVID-19 restrictions, business activity in the Australian economy returned to growth during June, according to flash PMI data, adding to recovery signs after four months of contraction resulting from the pandemic. While the data will fuel hopes that the economy could return to growth in the third quarter, the latest data represent only a relatively mild upturn compared to the unprecedented declines recorded in recent months. Looking ahead, further recovery could be constrained if a paucity of demand persists in the coming months.

Firms expect output to rise over the next 12 months as they continue to emerge from lockdown. Despite this improved sentiment, companies remained reluctant to invest in new capacity, as sales remained subdued. Employment fell further as operating capacity remained in surplus compared to the pre-pandemic period. Prices meanwhile rose for the first time in three months after steep falls in April and May, in part due to rising costs but also hinting at a tentative welcome return of pricing power.

The Commonwealth Bank Australia Flash PMI, compiled by IHS Markit and encompassing both the manufacturing and service sectors, surged by nearly 25 index points to 52.6 in June, up from 28.1 in May. By breaking above the 50.0 no change level, the latest figure indicates an increase in business activity for the first time since January, though the upturn is insufficient to prevent the economy from falling into a recession during the second quarter.

At 34.1, the average PMI reading for the three months ending June is by far the lowest ever recorded since the survey began in May 2016 and indicative of a steep fall in GDP. However, more encouragingly, the rise in the PMI into expansion territory in June bodes well for the economy to return to growth in the third quarter, adding to expectations that the recession may have been shockingly deep, but also looks to have been welcomingly brief. 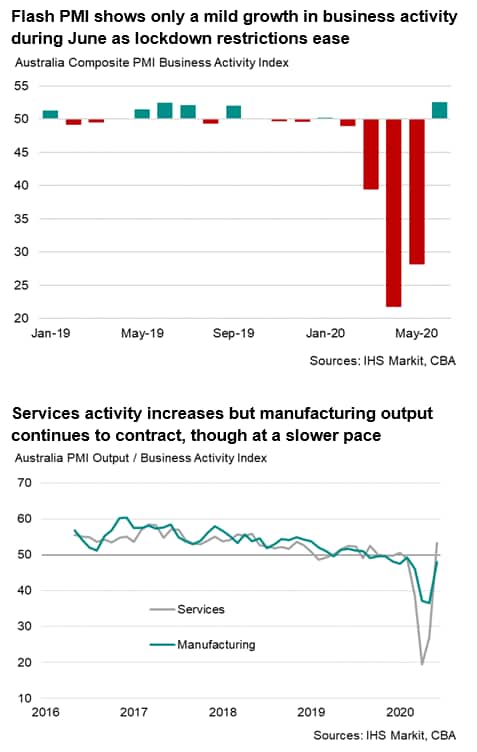 The survey also brought signs of a divergence in sectoral performance during June, with the easing of the COVID-19 restrictions primarily benefiting the service sector.

The rise in overall business activity was driven by a rebound in the service sector, reflecting the improvement in domestic demand. Services activity rose for the first time in five months, increasing at the fastest rate for just over two years.

By contrast, manufacturing output fell for a tenth straight month though the rate of downturn eased notably from the steep declines seen in April and May.

The upturn in business activity was fuelled by pent-up domestic demand while the external sector continued to deteriorate. Total new order books grew for the first time since January, though the rate of increase was only marginal. While restrictions have been relaxed since late May, some social distancing measures remained in place, such as limits on large public gatherings and quarantine orders for interstate travellers in some states. By sector, demand for Australian services rose only mildly in June, while orders for manufactured products continued to fall.

Meanwhile, export sales declined further in June, marking a fifth consecutive month of contraction. The downturn in global trade and the ongoing closure of Australian borders continued to weigh on foreign demand for Australia goods and services. Manufacturing and service sectors both recorded further contractions in new exports, with the latter again posting a sharper decline, linked to the collapse in tourism. 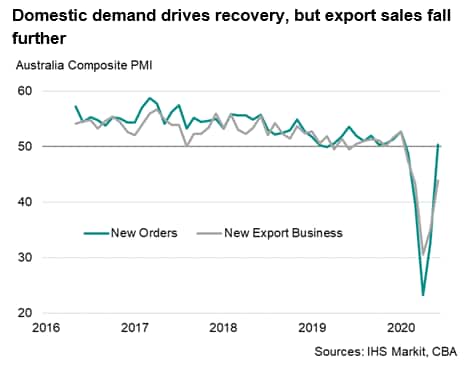 The expansion of business activity was accompanied by a rise in price pressures. Input costs increased for the first time in three months during June, with the rate of increase solid and contrasted with the previous two months of steep declines. Inflation was driven by a combination of factors, including increased transport costs, supplier fee hikes, greater raw material prices, and a weaker Australian dollar. Higher input expenses were reported in both manufacturing and service sectors, but the former had registered a notably faster rate of inflation. In fact, factory costs rose at the quickest pace for two years. Anecdotal evidence showed that prices for base metals, chemicals, plastics, paper, food items and fuel had all risen in June since the prior month.

In response, firms raised their selling prices for the first time since March. However, the rate of increase was only modest, reflecting that subdued demand continued to constrain the pricing power of companies. 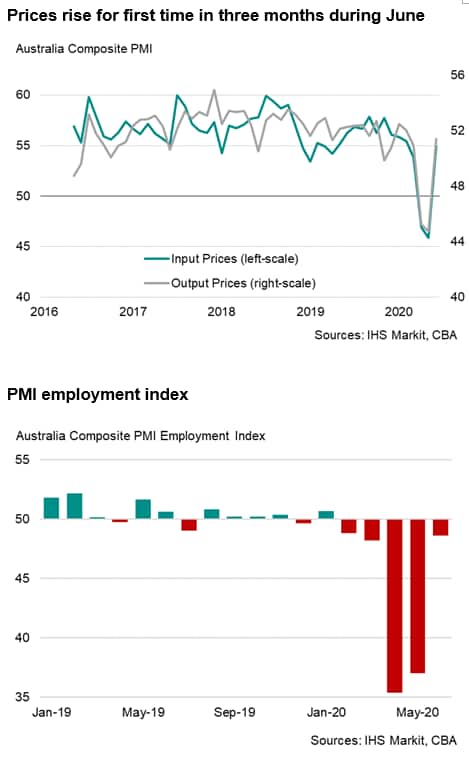 As the country moves towards the final phase of a three-stage plan of eased restrictions in coming months, the PMI should rise further. Indeed, business expectations of higher output in the year ahead rose in June to the highest for nine months, though firms mentioned that their projected increase in activity stemmed from a low base after several months of substantial falls due to lockdown measures. This suggests that, in order for the recovery to be meaningful, the PMI needs to be commensurately above 50 (60 or even 70), to offset the steep contractions recorded in April and May.

Forward-looking survey indicators point to a challenging recovery in the months ahead as firms continue to rebuild from the devastating hit to the economy. While the decline in demand has bottomed out, an absence of a stronger pick-up in sales will limit the extent of the recovery.

The labour market meanwhile continued to deteriorate as operating capacity remained in excess compared to pre-pandemic levels. Survey data showed employment fall further in June, and further job losses will lead to a weakening consumption trend, thereby acting as a dampener on recovery momentum. Official data indicated that the unemployment rate rose to a 19-year high of 7.1% in May, with over 824,000 jobs lost in April and May.