Flash PMI data showed signs of stabilisation of the Australian private sector economy at the end of the third quarter, with activity and sales increasing marginally in September after falling in August. However, other survey indicators suggest that the rebound may lack momentum going forward. In particular a further drop in backlogs of work may dampen output growth in the coming months unless a more robust recovery in demand emerges.

Rising input costs also added to private sector woes, pressuring firms, especially those operating in services, to step up efforts in controlling expenses to remain viable, often resulting in job cuts. Meanwhile, detailed survey data showed diverging performance between manufacturing and services, with the recovery in the latter dampened by renewed containment measures in parts of the country.

The IHS Markit Flash Australia Composite PMI, covering both the manufacturing and service sectors, rose just one point from 49.4 in August to 50.5 in September. That said, by registering above the no-change 50.0 level, the latest reading indicated a marginal increase in private sector output, bringing welcome signs of stabilisation after a brief slide back into contraction in August. Furthermore, the average PMI reading for the third quarter (52.5) not only showed a marked improvement from the severe downturn seen in the second quarter (34.2), but also represented the first quarterly growth for a year.

The overall upturn in the Australian private sector economy was driven by a sustained recovery in the manufacturing sector during September. Production and sales both rose solidly, with the latter increasing at the sharpest pace since January 2019, supported by renewed growth in export orders. 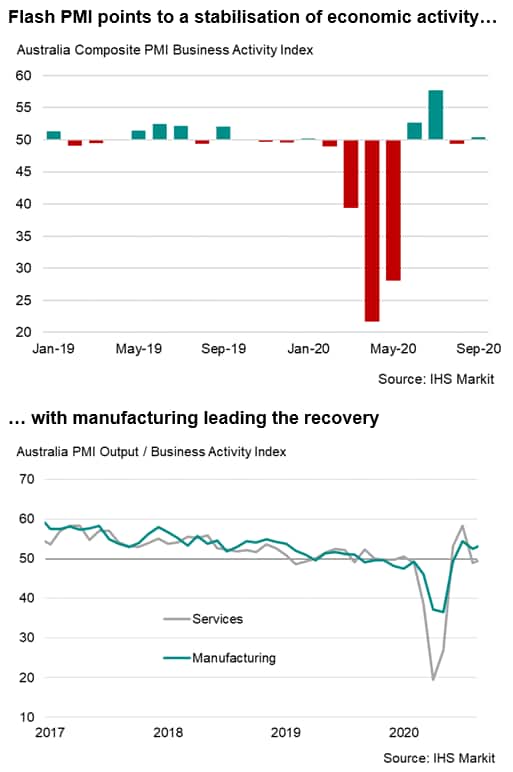 The loosening of containment measures in Victoria meanwhile provided some relief to the service sector, which was much more affected by renewed social distancing restrictions when compared to manufacturing. The survey indicated that the service sector as broadly stable in September, with business activity unchanged from August. New orders received by service providers also steadied following a solid drop in the middle of the third quarter.

Although external demand for Australian goods and services weakened at the softest rate in the current eight-month sequence of decline, border restrictions and containment measures continued to weigh on the service sector in particular, with services export orders falling sharply again in September.

With the widening performance gap in business activity and sales between manufacturing and services, their employment trends also diverged in September. Cuts to workforce numbers were limited to the service sector, while manufacturers added more workers. Factory employment rose for the first time in ten months, increasing at the fastest rate since early 2019 amid a growing lack of operating capacity.

By contrast, services firms not only reported a further drop in workforce numbers, but also the fastest pace of job shedding since the height of the pandemic in April and May. This underscores the challenges that service providers, especially in consumer services, face in terms of operating costs, damaged finances and weak demand.

A major driver of job creation is capacity pressure. The strong increase in manufacturing sales during September contributed to a sharp rise in the level of backlogs among Australian goods producers, thereby putting pressure on their operating capacities. This in turn boosted hiring as factories sought to invest in new capacity to cope with rising production requirements.

The picture in the service sector is quite different, with demand conditions remaining subdued, leading to a further easing of capacity pressure in September which, in turn, weighed on the services labour market. 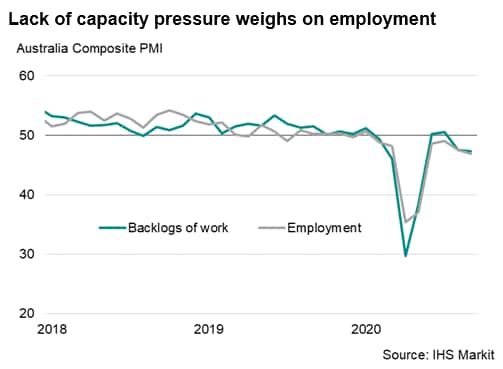 Australian private sector firms faced a further increase in input costs during September, with manufacturing reporting a noticeably sharper rate of input price inflation due to greater costs of raw materials and increased freight fees. Goods producers were able to pass some of the rise in costs on to their customers. On the other hand, services providers not only had to absorb higher expenses amid subdued demand, but anecdotal evidence suggested that some firms even provided discounts to boost sales.

Looking ahead, the September survey saw optimism about the coming 12 months rise to a two-year high, with much of the optimism riding on expectations of a further easing of containment measures in the coming months. Other survey indicators, including backlogs and employment, point to a challenging economic recovery ahead, one that is likely to progress in a stop-start manner as the course of the pandemic trajectory globally remains uncertain in the absence of an effective and widely available treatment or vaccine.

The prospect of rising unemployment would curb household confidence, and therefore private consumption, which will dampen the pace of recovery. Investment activity may also be constrained by economic uncertainty, though government infrastructure spending will lend some support to investment.