Flash PMI data pointed to a collapse in business activity across Australia's private sector economy in April as lockdown measures designed to prevent the spread of COVID-19 took their toll on demand, particularly for services. Consequently, workforce numbers were reduced sharply, contributing to the first decline in business costs in the four-year survey history. Costs of factory inputs rose at the steepest rate for two years, however, linked to supply shortages and the weakened currency. Business confidence remained subdued in the historical context, with concerns about future demand unsurprisingly dominated by the virus pandemic.

While the Australian government is mulling over easing some of the restrictions in the coming weeks, any lifting of the lockdown rules will likely be gradual and staggered, suggesting that a recovery in economic activity is still far off. 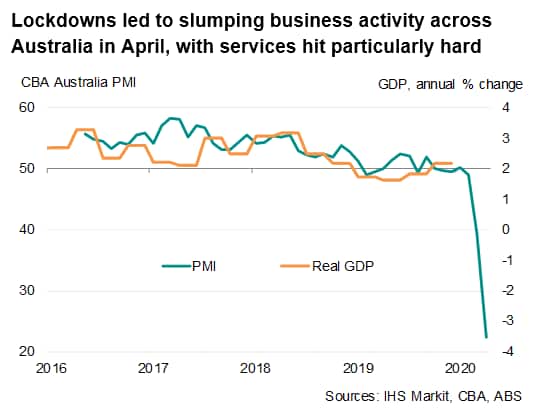 The Commonwealth Bank Australia Flash PMI, compiled by IHS Markit and covering both the manufacturing and service sectors, fell by a record 17 points in April, building on a previous plunge of 9.6 points in March to drop from 39.4 to 22.4, its lowest in the four-year survey history and so far lower than any other composite PMI in the history of the IHS Markit surveys with the exception of Italy in March. The latest reading indicates a third successive month of declining business activity, with the latest two months seeing especially sharp falls amid fiercer measures to contain the spread of the coronavirus disease 2019 (COVID-19) virus.

The steeper slide in the PMI signals a deepening economic downturn at the start of the second quarter, highlighting the rising inevitability that Australia will fall into a recession of an initial intensity greater than that seen during the global financial crisis. IHS Markit estimates that the Australian economy will contract by an annual rate of 6.6% in the second quarter, with risks of further downward revision given fluid circumstances.

The survey reveals how virus-fighting restrictions, implemented since 23rd March, have severely impacted both the manufacturing and service sectors, with the latter bearing a bigger brunt of the damage caused by the lockdown measures. Services business activity plummeted at a rate unprecedented since the survey started four years ago, with a broad range of services being affected by the COVID-19 measures, including art and recreational activities, banking, real estate, hotels and restaurants. New business inflows also fell at a record pace and one that was severe overall. The slump in sales saw a corresponding collapse in the level of backlogs of work, which decreased at the fastest seen in the series history, hinting that services activity will remain under pressure in coming months. 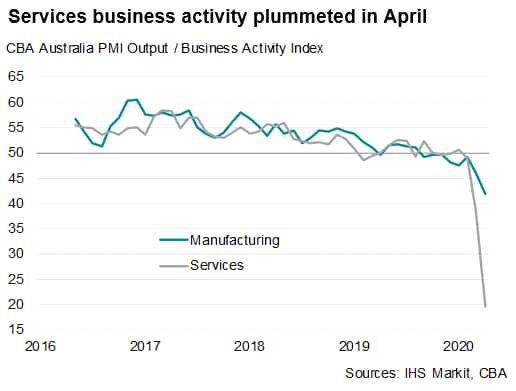 The survey data showed that the downturn in manufacturing also intensified in April, with the headline PMI falling sharply to 45.6, down from 49.7 in March. Note that the headline manufacturing index is a composite measure of survey indices such as output, new orders, employment as well as suppliers' delivery times. With the manufacturing sector hit by supply disruptions caused by measures to contain the spread of COVID-19, the outsized influence of delivery delays therefore had contributed to the headline PMI understating the severity of the economic impact. As such, the survey's output and new order indices will act as a purer guide to the current underlying business trend.

Indeed, both manufacturing output and new orders fell to a greater extent compared to the headline index. Factory production shrank at a record pace, though the rate of decline was not as steep compared to the fall in services activity. Sharply lower production was accompanied by a record fall in factory orders, including a steepening drop in export trade.

Drastic measures taken to halt the COVID-19 spread decimated inflows of new business, particularly in the service sector, which in turn contributed to a rapid development of spare capacity. The level of backlogs of work slumped at a pace never recorded in the four-year survey history.

With many firms unable to operate normally, or even at all, under lockdown conditions, they were often forced to lay off employees to reduce costs. Overall employment fell for a third straight month, with the rate of job shedding accelerating to the quickest on record. While both manufacturing and service sectors reported sharp declines in employment, the latter saw a notably steeper fall.

Total input costs fell for the first time in the survey history, dropping at a solid rate during April. The details showed that the drop in costs was predominantly driven by the service sector. Service input prices fell sharply in April, with the decline the first recorded since the survey started over four years ago. Respondents generally highlighted that a decreasing wage bill, linked to layoffs, was a key factor behind falling costs.

By contrast, manufacturing costs not only rose further, maintaining the unbroken trend of inflation, but also increased at a record rate. Inflation was driven by a combination of material shortages and a weaker exchange rate. The Australian dollar had depreciated just over 4% against the greenback this month. 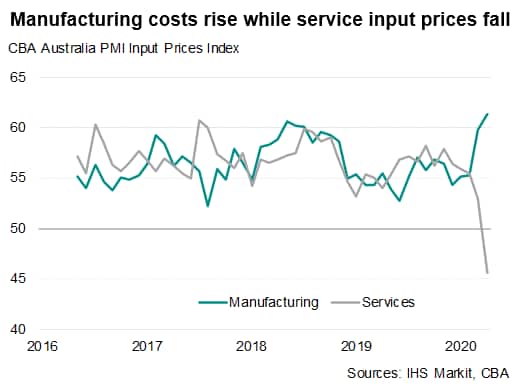 The April survey findings indicated that the pressure on supply chains intensified in the month, contributing to the longest lengthening of suppliers' delivery times on record. Supply shortages caused by plant closures in Europe, US and Asia amid stricter anti-virus measures adopted around the world were the most common reason cited by firms that reported delivery delays.

Business expectations for the year ahead remained subdued. While rising off its March record low, the PMI Future Output Index remained among the lowest since the survey started in May 2016. Business confidence was notably weaker in manufacturing than the service sector, with the former seeing sentiment falling to a record low. Concerns of pessimistic firms clustered around the impact of the virus pandemic on their future business activity.

With Australian government announcing that restrictions on key health and education services will be lifted from next week, but other social distancing measures likely to stay in place, economic activity is expected to remain dampened in coming months. While services activity may rebound when distance measures are eased, manufacturers appear to be anticipating a more prolonged downturn. 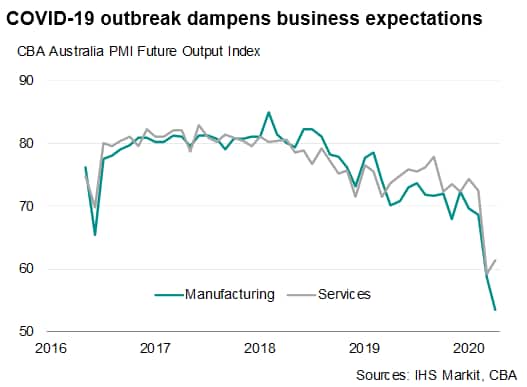