If the Labor party wins the upcoming election, it will scrap cash refunds for low-taxed investors with excess franking credits and the centre-left political party indicated that this proposed change will commence on July 1st this year as long as they win the upcoming election in May. Thus, there were expectations that companies would return their excess franking credits during the February reporting season while they are still useful to shareholders; this could be accomplished either by increasing their payout ratios or via other form of returns such as special dividends.

However, we observed that the increase in ordinary dividends or distribution of special dividends announced in February were mostly attributed to either strong performance or robust fundamentals.

Strong growth in ordinary dividends in line with expectation

The top 100 companies in Australia announced AUD 23.2bn worth of ordinary dividends in the first four months of 2019. This is 21.4% higher than the amount reported for the same period last year and is close to our projection of AUD 23.5bn. This implies that the proposed policy change to end cash refunds is not the primary driver for this jump in dividends as our forecasts are fundamentally driven and do not incorporate unconfirmed policy changes. 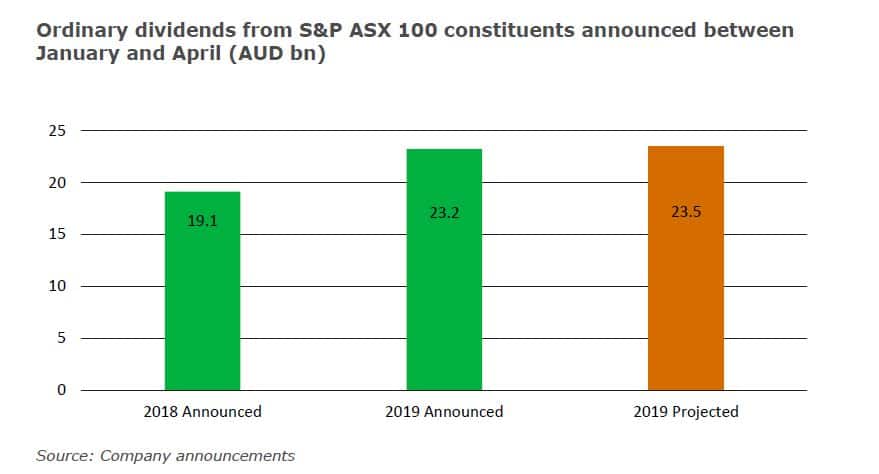 Special dividends paid by the top 100 companies in Australia surpassed our expectations by a substantial margin. In the most recent reporting season, special dividends from these companies aggregate to AUD 4bn, four times higher than our projection of AUD 1.01bn. The bulk of these specials came from the miners, followed by the retail sector. Although the potential change in franking policy may have influenced their decisions to reward shareholders with one-offs, we note that these special dividends do coincide with asset sales and robust fundamentals.

What to expect this coming May?

The proposed change is expected to take effect on July 1st this year, suggesting that dividends paid on or after this date will be affected. Taking a look at the companies set to announce their results next month and have pay dates expected to be in June, we would like to highlight that the likelihood for these companies to announce a special dividend or deviate from their respective dividend policy due to the Labor party's proposed policy is very low.