The start of the fourth quarter saw the recovery of the Australian economy strengthened as business activity picked up solidly amid a further loosening of social distancing curbs, notably in the service sector. Flash PMI data showed business activity increased at the fastest rate for three months. Business sentiment about the year ahead also improved, rising to the strongest since August 2018, with services firms particularly upbeat about future prospects.

Other survey indicators, however, raised questions as to the durability of the upturn. Demand in particular has not kept pace with the upturn in overall activity. The key concern is that if subdued sales growth persists in the coming months, the lack of capacity pressure could lead to more job losses as firms seek to control costs in order to remain viable. 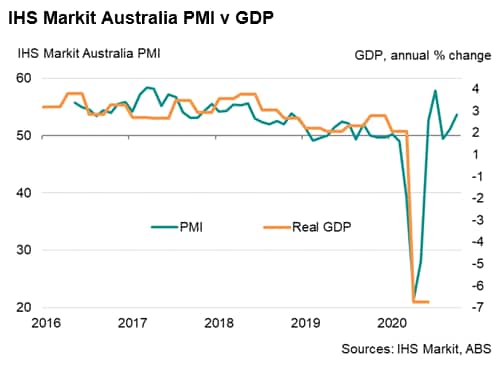 The IHS Markit Flash Australia Composite PMI, covering both manufacturing and service sectors, rose 2.5 points from 51.1 in September to 53.6 in October. The improvement signalled the fastest increase in private sector output for nearly a year. This built on the gains registered in the third quarter (which saw an average index reading of 52.8).

The stronger upturn in the Australian private sector economy coincided with a further easing of social distancing restrictions, particularly in Victoria, which benefited the service sector in particular. Indeed, services business activity rose sharply in October amid greater consumer confidence and more events permitted to be held. Overall activity was also supported by further growth in manufacturing production, though the rate of factory output expansion moderated from September, in part related to delivery delays of input materials due to logistical issues. 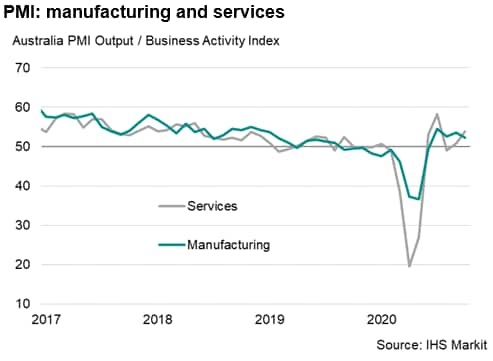 Worryingly, the recent increase in demand for Australian goods and services has not been commensurate with the stronger performance in private sector output, casting doubts on the sustainability of the recovery. Orders for goods and services rose for a second straight month in October, but at a rate similar to September and one that was only marginal overall, suggesting that consumption and investment continued to struggle despite loosening COVID-19 curbs.

Part of the reason for subdued overall demand was linked to weakness in the external market. Foreign sales of Australian goods and services remained in decline for the ninth month running in October amid border restrictions and weak demand at overseas clients.

The absence of a robust pickup in new business saw firms' operating capacities rarely tested. On the contrary, backlogs of work declined further in October, though at the slowest pace for three months, hinting at excess capacity. With capacity in surplus, firms continued to reduce their headcounts as part of efforts to control costs and remain viable. Overall employment fell for a ninth straight month, with lower workforce numbers seen across both manufacturing and services, with the former cutting jobs again after a modest rise in September. 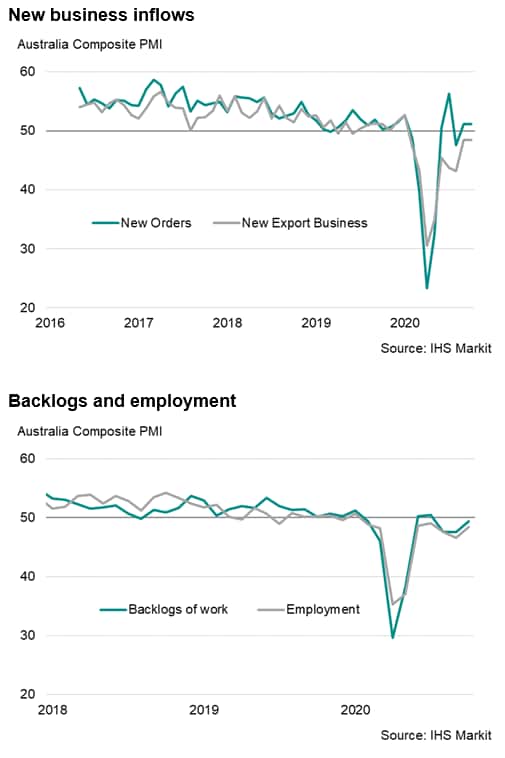 Suppliers continued to struggle to make timely deliveries at the start of the fourth quarter, with workers' strikes at ports contributing to logistical delays. Average lead times lengthened to the greatest extent seen since the record rates of April and May at the height of the pandemic.

The delay in receiving manufacturing inputs has had an impact on production, with some respondents highlighting that output was reduced due to insufficient materials. A lack of improvement in supply chains in the coming months could further dampen factory production.

Goods producers were able to pass some of the rise in costs on to their customers, with factory gate prices rising at the fastest rate for seven months. In contrast, services providers had to absorb higher expenses and, in some cases, even provide discounts to stimulate sales amid subdued demand.

We expect the recovery in the Australian economy to continue in the fourth quarter, though the extent of economic growth relies heavily on demand reviving. Much will in turn depend on whether social distancing measures can be loosened further, and border restrictions relaxed. The October survey indicated the strongest business sentiment for just over two years, underpinned by expectations of the economy opening up further in coming months. 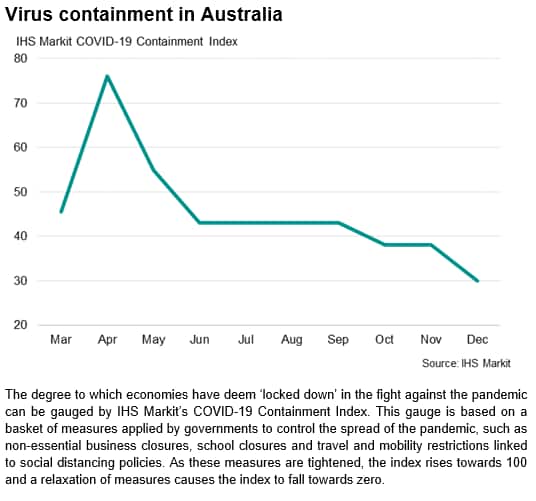 The final Australia PMI data will be published on 2nd November (manufacturing) and 4th November (services and composite).