The Australian economy lurched back into growth territory midway through the second quarter, driven by a revival in services activity, according to flash PMI survey data. Forward-looking indicators were healthy, suggesting that growth could pick up further in coming months, likely also supported by fiscal measures to be put forth by the new government. 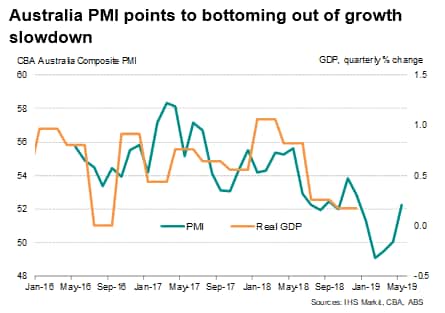 According to flash estimates, the Commonwealth Bank of Australia Composite PMI Output Index rose from 50.0 in April to 52.2 in May. With 50.0 being the no-change level between growth and decline, May's flash PMI reading signalled the first improvement of business conditions in four months.

At 51.1, the second quarter PMI average so far contrasts with 50.0 for the opening three months of 2019. Furthermore, the PMI sub-indices added to a brightening picture for the Australian economy. Growth in composite new orders (covering both manufacturing and services) was the strongest in five months and solid overall. Employment was up, as was the level of incomplete work, which is positive for future output activity. Business expectations remained buoyant. 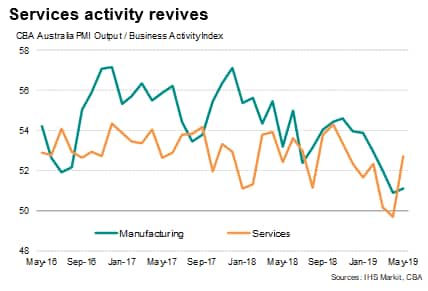 Growth was largely driven by a revival in the service sector. Following three months of weak performance, services activity increased solidly in May, buoyed by new business expansion. The business outlook was also positive, with service providers raising employment levels in anticipation of greater activity in coming months.

With a series of headwinds weighing on service sector growth, including new credit regulations, weather disruptions and election-related jitters, the improvement of business conditions in the service sector signalled in May proves encouraging for the Australian economy amid global trade concerns.

Meanwhile, manufacturing conditions continued to improve, providing a supportive base for the Australian economy. The output dip in April proved short-lived as production rose in the middle of the second quarter, supported by greater demand.

A particular bright spot was the expansion of new export orders. However, the increase in total new business failed to test firms' operating capacities. Backlogs of work fell for a second straight month, implying that output growth in the months ahead could remain modest unless demand picks up significantly.

Australian firms continued to respond to higher costs by raising output prices. However, the rate at which charges were increased was broadly consistent with consumer inflation of 1.5-2.0%, and below the central bank's target of 2.0-3.0%. 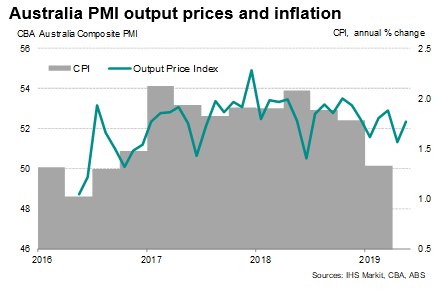 While the flash May PMI report suggested an end to the recent economic slowdown, it is not at all guaranteed that growth will pick up in coming months. Much could also depend on any fiscal support from the new government, such as tax relief. As such, the Reserve Bank of Australia is widely expected to deliver a rate cut in June after Governor Philip Lowe commented that the bank won't be able to meet its forecasts for lower unemployment and a rise in inflation without a cut in the policy rate.

For more information about the PMI surveys and the Commonwealth Bank PMI for Australia, please contact economics@ihsmarkit.com