On 26 October 2021, Prime Minister Scott Morrison announced Australia's Long-Term Emissions Reduction Plan (The Plan) to deliver net zero by 2050. The new target represents a significant ramp-up from the pledge to the Paris Agreement to reduce greenhouse gas (GHG) emissions by 26-28% from 2005 levels by 2030. The net-zero target brings together existing plans for a significant transformation of Australia's energy economy by driving down costs of low-emissions technologies and enabling their deployment at scale while continuing to export coal and natural gas beyond 2050.

The Plan provides a clear government direction and builds upon announced targets for net-zero emissions by no later than 2050 from all states and territories (see Table 1) and from a growing number of corporations in Australia. AGL Energy, EnergyAustralia, and Origin Energy, three of the top four Australian corporate GHG emitters, have announced ambitions for net zero by 2050. In addition, more than 43 Australian companies have signed onto RE100 pledges, including Australia's Big Four banks, and called on the Australian government to increase the role of renewables in the country's energy mix. 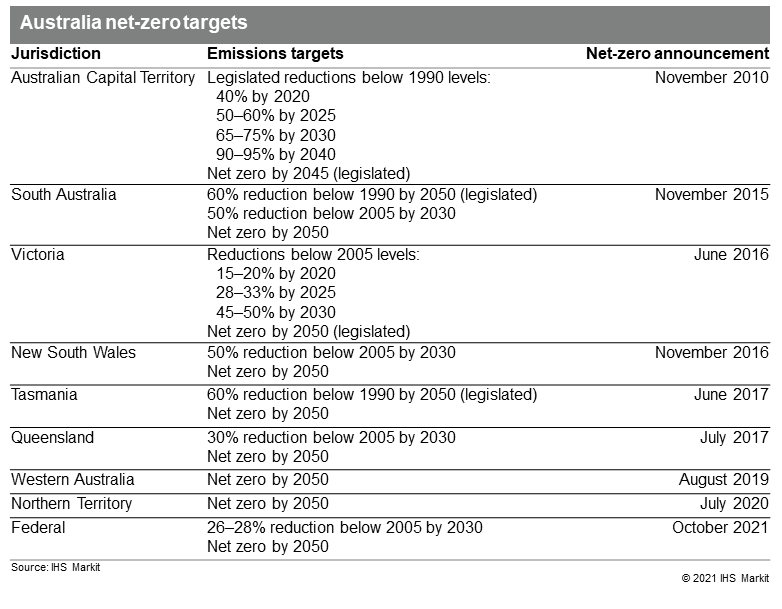 Getting to a net-zero emissions trajectory by 2050 can only be achieved through a major restructuring of Australia's energy economy. In 2020, Australia emitted a reported 498 million metric tons (MMt) of carbon dioxide equivalent (CO2e), a decline of 20% from 2005 levels[1], making it the world's 17th largest market by emissions. Power generation is the biggest source of GHG emissions, accounting for 30% of Australia's total emissions in 2020, followed by methane that is mostly from the production of hydrocarbons (19%) and transportation (19%) (see Figure 1). Renewables are key to decarbonizing the power sector, while carbon capture and storage (CCS) and emissions offsets will be needed to continue the production of hydrocarbon resources. Furthermore, Australia's vast distances between major population centers will require strategic planning to decarbonize the transportation sector. 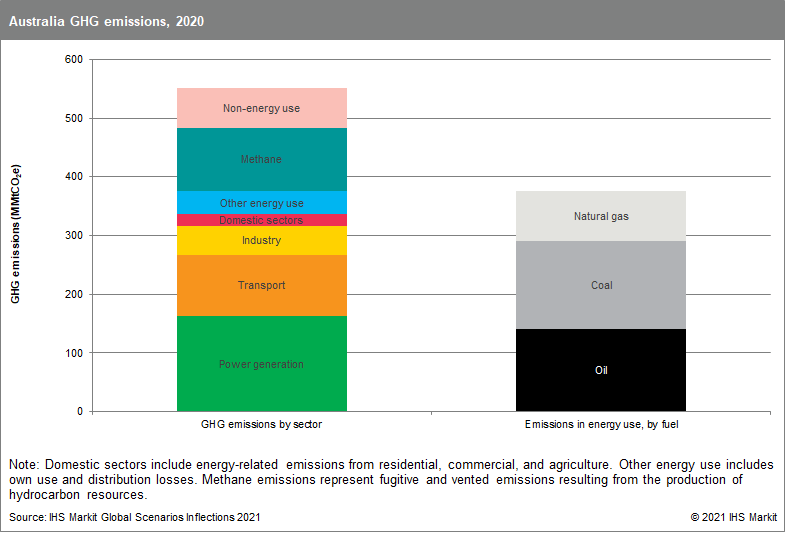 Australia's power system today is heavily reliant on coal-fired generation, but the forthcoming retirement of an aging fleet will result in a significant shift in the nation's generation mix.[2] In 2020, 54% of electricity produced was from coal-fired generation, 21% from gas-fired generation, 2% from oil, and 18% from wind and solar PV. The retirement of coal-fired capacity can only be achieved with investment in new firming capacity. In addition, the existing grid systems were designed and established based on the centralized thermal power structure, and additional renewable generating capacity will require significant upgrades to transmission systems.

Beyond electrification: The role of low-carbon gas

Australia's 2019 National Hydrogen Strategy, backed by the Technology Investment Roadmap, sets a goal for the nation to become a global supplier of clean hydrogen[3] by 2030 and drive down production costs to make clean hydrogen economically competitive with current hydrogen production methods. Australia's abundant renewable resources will give the country a competitive edge as a green hydrogen and ammonia producer.

Federal and state governments are supporting the development of a domestic demand market to expedite the rapid expansion of the hydrogen supply chain through regional hydrogen hubs and industry-led technology clusters to set the groundwork for an export industry. One of the key challenges to becoming a global supplier will be reducing the costs of transporting clean hydrogen to be competitive with local renewables-based production costs.

The choices that Australia makes in its strategy toward a lower-emissions future will have big implications for energy companies globally. Australia surpassed Qatar in 2019 as the world's largest LNG exporter, with approximately 20% of global liquefaction capacity. In a response to the COVID-19 pandemic, the federal government has proposed a gas-led economic recovery plan to deliver more affordable and more sustainable gas supply to support growth in manufacturing while maintaining the position of one of the top LNG exporters. In addition, The Plan aims to continue to serve traditional export markets without reducing the competitiveness while creating opportunities in exporting clean LNG through CCS and offsets.

LNG buyers have become increasingly sensitive of their GHG emissions, leading suppliers to re-evaluate decarbonization options for their LNG cargoes. GHG emissions from each individual cargo vary significantly, with emission estimates ranging between 220,000 metric tons of CO2e and 300,000 metric tons of CO2e for the full value chain, adding additional cost to overall production and sale of carbon-neutral LNG. Added cost could be borne by suppliers to secure market share, by buyers aiming to provide low-carbon supply to end users, or both.

Logan Reese, is an associate director on the Asia Pacific Regionally Integrated team at IHS Markit, focusing on Australia power and gas markets.