After strong back and forth swings in monthly sales this year, retailer category sales changes in August were noticeably more subdued. The breadth of the sales improvement was positive. Furniture and home furnishings retailers and electronics and appliance retailers were the only declines. The 4.8% m/m gain in food and beverage store sales was the largest sales change, in addition to being the largest contributor to growth, thanks to strong grocery, specialty, and liquor store sub-categories. This was a good sign, as the return of restaurant dining led to less-than-stellar food and beverage store sales in June and July. Gasoline station sales rose 3.8% m/m, but with rises in prices at the pump, the sales volume rose 1.8% m/m. Building materials and garden equipment sales rose for the first time in four months, with a similar growth profile in volume terms. Automotive dealerships may have started to see inventory levels dwindle due to constrained production. Sales at new car dealerships were flat and used car dealers' sales were not much better, at 0.2% m/m. After a volatile first half of the year, clothing and footwear retail sales advanced 4.2% m/m, after pulling ahead of the pre-pandemic level in July. Overall, the consumer is in a much better place than a year ago, with sales up 8.5% year on year (y/y). 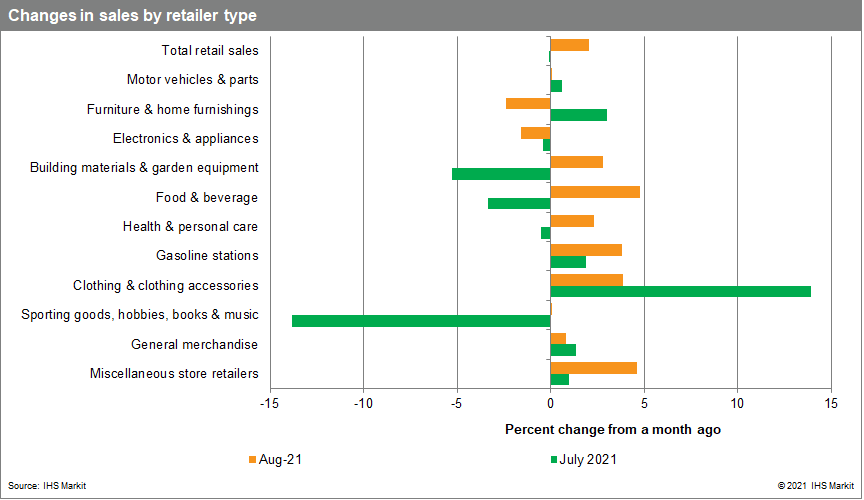 For the first time since June 2020—when retailers were rebounding from the initial onset of the pandemic—all 10 provinces recorded sales increases. Sales in Saskatchewan recovered nicely after softness in the previous two months. Strong sales growth was seen in Toronto and Montreal, which corresponded with Ontario and Quebec leading provincial contributions to headline sales growth.

E-commerce sales rose a modest 3.2% m/m to $3.3 billion, after a sharp drop off in July. Relative to sales from a year ago, July and August have registered the only declines since online sales tracking began in 2016. Benefitting previously from regional health restrictions, e-commerce sales have downshifted because of pent-up demand for newly reopened in-person services. Compared with August 2019, e-commerce is still up 68.4%, highlighting the consumer habits formed during the pandemic and response from businesses of building out their digital platforms. 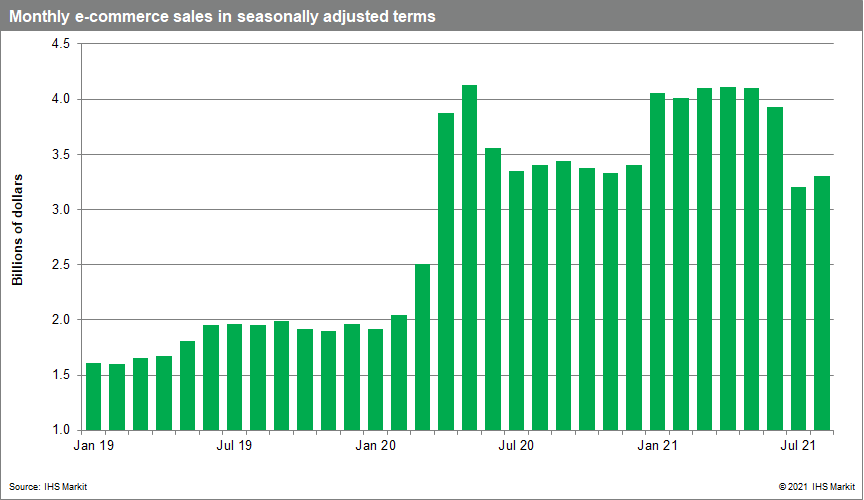 As with July, consumers were likely allocating more spending towards other in-person service industries not captured by retail sales. For the first time this year, none of the underlying retail sectors saw double-digit monthly sales swings. This points to some sustained normalcy in consumer behavior since public health restrictions began rolling back in June. Along with manufacturing and wholesale gains, the solid sales volume print will help August real GDP by industry growth. However, the advance retail sales estimate showing a steep pull back in September puts a bit of a damper on this release.