Conflict Monitor data shows a significant reduction in the level of fighting in the four areas designated as de-escalation zones, but an increase in fighting in eastern provinces bordering Iraq

An IHS Markit analysis of the implementation of the Astana de-escalation plan, as agreed by Russia, Iran, and Turkey, suggests it was intended by Russia and Iran to free up forces to focus on recapturing eastern Syria and the border crossings with Iraq. The analysis of the Conflict Monitor dataset of geocoded indicator events for Syria, compares the number of recorded incidents of fighting between Syrian government forces and insurgents for each province in the 17 days before and after the de-escalation plan was signed in Astana on 4 May 2017.

The data shows a significant reduction in the level of fighting in the four areas designated as de-escalation zones (see infographic below). These include rebel-held areas in and around Idlib, the Talbiseh pocket in Homs, the eastern suburbs of Damascus, and the far south of the country. The 30% increase in recorded fighting in Homs province has been driven by the recent government offensive against the Islamic State around Palmyra, and does not relate to the Talbiseh pocket that forms part of the de-escalation plan.

In contrast to the reduction in fighting in western Syria, there has been an increase in fighting further east, particularly in Rif Dimashq, eastern Homs, and Deir al-Zour provinces. This suggests that the Astana plan is being used by the Syrian government and its backers, Russia and Iran, to free up government forces in an attempt to secure Deir al-Zour and retake control of the main road crossings into Iraq from the Islamic State, before US-backed forces do. 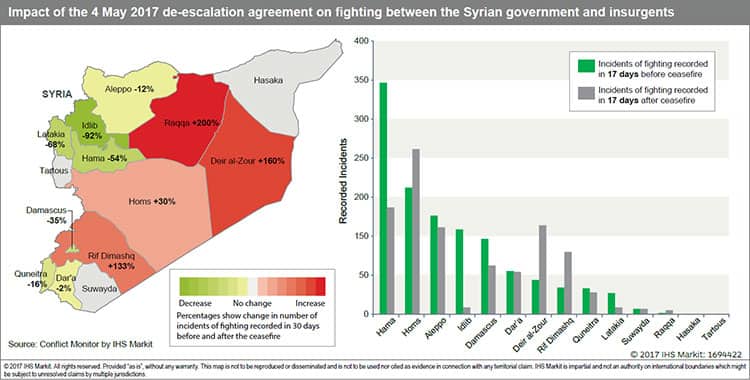 Despite the Astana de-escalation plan, a political settlement to end the war remains very unlikely, given conditions on the ground

The Syrian government has increased territory under its control by 23% between the start of the Russian military intervention in September 2015 and May 2017 (see map below). It is now also performing better than at any point in the past three and a half years, with record gains made in April and May, according to the latest Conflict Monitor data.

President Bashar al-Assad has consolidated his hold over core areas in western Syria, controls all the major cities, and his government's survival is effectively guaranteed by Russia. The opposition, for its part, is fragmented, retaining very few bargaining chips that would give it leverage in future negotiations, and has lost much of its perceived legitimacy, becoming dominated politically by Islamists, and militarily by jihadists affiliated with either Al-Qaeda or the Islamic State. 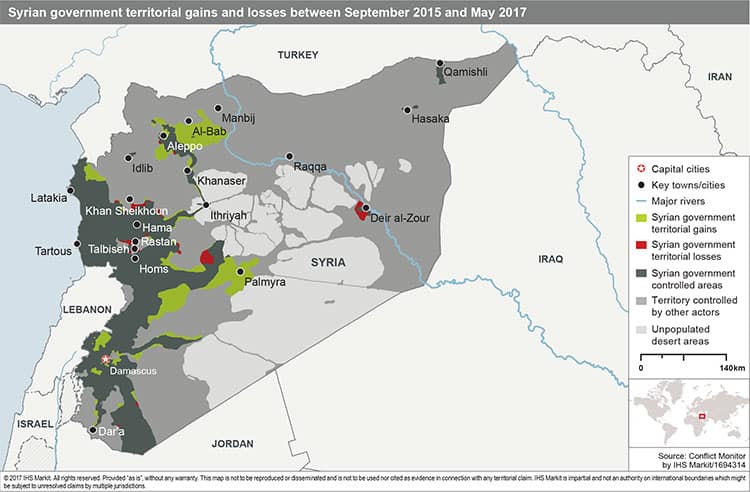 There appears to be an acceptance by the US and its allies that retaining the existing government as part of a future settlement is the 'least bad' option. In any event, the increased extent of Russian military involvement, including deployment of advanced anti-aircraft missile batteries across the country, effectively excludes the option of US-backed regime change by force.

There have been several initiatives to find a political settlement to the civil war, by the United Nations in Geneva and Vienna, and more recently by Russia, Iran, and Turkey in Astana. Some incremental progress has been made; however, IHS Markit assesses that a political settlement remains very unlikely, given the conditions on the ground.

The Syrian government has no incentive to make any meaningful concessions, and President Assad is increasingly confident that he can defeat the insurgency by force. The opposition does not hold a unified position, and lost most of its remaining leverage when government forces recaptured the city of Aleppo in November 2016. Jihadist factions under the umbrella of Hayat Tahrir al-Sham are still militarily dominant, particularly in the Idlib pocket of rebel-held territory, and are fundamentally opposed to reaching a settlement with the Iran-backed government in Damascus.

A race for the Iraqi border will probably break up the Islamic State's remaining caliphate in 2017, but strengthen the position of Hay'a Tahrir al-Sham jihadists in north-western Syria

The areas that will be contested by all parties in the race to the Iraqi border include the last remaining stretch of continuous territory governed by the Islamic State along the River Euphrates. This will probably mean the breaking up of the Islamic State's remaining caliphate before the end of the year, reducing its governance project to a string of isolated urban areas that will eventually be retaken by the Syrian government or US-backed SDF forces in the course of 2018.

Hay'a Tahrir al-Sham on the other hand is likely to benefit from the Astana de-escalation plan, as the reduction in government attacks against them will enable them to focus additional resources on consolidating their dominance vis-à-vis other rebel factions. The rebel-held Idlib pocket where the group is dominant has little strategic significance for the Syrian government, and the resources that would be required to re-establish control there make it unlikely to be recaptured before other priorities, such as Deir al-Zour and access to the Iraqi border, have been achieved. In fact, the government benefits from keeping that area under rebel control because that is where jihadist factions are strongest, providing a useful case for the government to delegitimise the entire opposition.