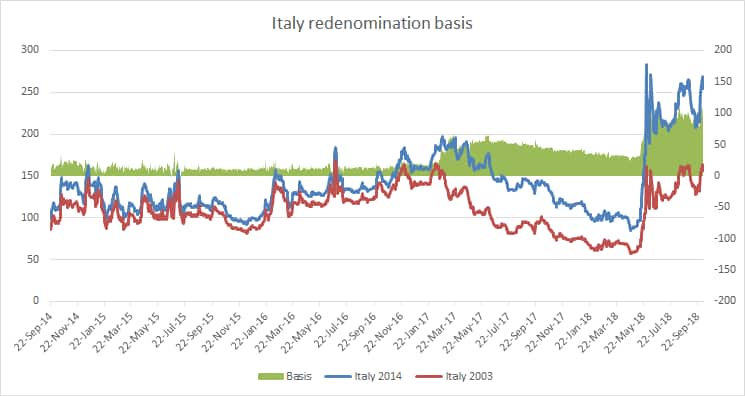 We noted last week that the markets may be guilty of complacency on Italy's budget, and so it proved. As mooted in the initial spending plan, an increase in the budget deficit to 2.4% was proposed by the government, significantly higher than the 2% limit specified by the European Commission. This was tempered by the finance minister Giovanni Tria stating that the deficit would come down in subsequent years.

Nonetheless, the clarification caused only a modest recovery. Italy's five-year CDS spreads widened from 221bps to 269bps in reaction to the first announcement and retraced to 255bps in the following days. It is inevitable that we will see further volatility before the Italian government officially submits the budget to the Commission in mid-October. Whether we see oscillations after this date will depend on the EU's response. What is certain is that this populist government is testing the markets and is aware of its power in the EU - Italy is not Greece. The basis between spreads on ISDA 2003 and 2014 definitions - a proxy for redenomination risk - widened above 100bps, though it is still some way off the panic driven 178bps reached in May. This will be a key indicator to watch as the Italian government and the EU jockey for position.

The Italian markets were already suffering from the sovereign's credit deterioration, so a corporate default only added to the gloom. Astaldi, a highly leveraged construction company, is a well known name in the European high yield market and has been a constituent of the Markit iTraxx Crossover for several years. It was trading above 40 points upfront at the beginning of this year, so the markets were certainly not caught by surprise on this occasion. It was pushed over the edge by its failure to sell a bridge in Turkey, a condition for a planned capital increase. It should be noted that Astaldi has only applied for protection from creditors "with reservation", an Italian legal arrangement that will allow it to carry on its business.

A question was put to the ISDA Determinations Committee asking if a bankruptcy credit event has occurred. The DC will have to decide whether the creditor application constitutes a bankruptcy under Article IV (4.2) of the definitions. There is a difference in wording under 4.2(c) and (d) in the 2014 definitions compared to 2003, we will see if this has any impact on the DC's decision. In 2015 another construction company Abengoa filed for credit protection. The DC deemed that the move of the word "similar" in section 4.2(d) meant that an application for credit protection alone was insufficient to trigger a bankruptcy credit event under 2014 definitions, but met the criteria under the 2003 rules. Abengoa had missed commercial payments, so a failure to pay credit event soon followed for 2014 contracts.

Astaldi five-year CDS is currently priced at 75 points upfront, indicating that the markets expect a credit event, whether it's the one put to the DC or another one soon. Its bonds did rally slightly on news that it had met all its payment obligations, though that shouldn't have an impact on a CDS bankruptcy credit event.

Turkey's turmoil was the catalyst for Astaldi's filing, and though its credit standing has stabilised in recent weeks, the climate may be about to get tougher for all emerging markets. The strengthening in the US dollar spells trouble for the asset class, and investors will focus on sovereigns with weak external positions. Capital flight could be one of the key themes as we approach the end of the year.