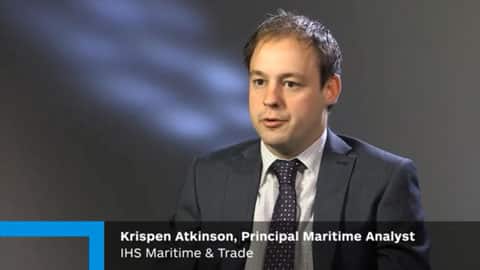 How has LNG developed as a marine fuel over the past five years?

Over the last five years, LNG has really developed into a maritime fuel. This has been largely pushed by certain subsidies that have been passed into shipping. However, since 2011 when the big Vikings converted, the industry has seemed to have seen LNG fuel as a more serious and become more confident about the usage of it.

Today we're seeing vessels being ordered in North America, largely pushed by the shale gas revolution. So we've got container ships now on order, which are going to operate between Jacksonville and Puerto Rico within the Jones Act trades. In Europe, it seems to be ferries and north shore vessels that seem to be taking up this trade. Now one of the major pushes for this are the emission regulations which are coming in in certain emission control areas that are set up around the world. This will see that the sulfur content in the emissions pushed from 1% down to not 0.1%. So by converting costs to LNG, the owners do not have to worry about the emission content.

Is conversion to LNG propulsion a viable option?

Conversion over to LNG could be a viable option. However, the reasons behind converting over to LNG would be driven by the emission control regulations that are coming in. Now at the moment, owners and operators have really two options if they do not want to take the compliant fuel. Now the first option would be to go to scrubber technology, which effectively takes the dirty emissions out of the exhaust gas once the fuel is being burnt.

The other option would be to go across to LNG. Now at the moment, what we are noticing in the industry is that scrubbers is/appears to be the preferred method - where we've seen already about a hundred vessels either converted or about to be converted to the system. LNG has been taken up by various owners. We're seeing a few ferries in North America which are now planned to go across to LNG fuel, as well as a couple of railroad container ships as well, which operate on the Jones Act trades. In Europe again, yet ferries seem to be an option for conversion over very little else appears to be going over to the LNG option, mainly because of the costs involved in re-piping the engines on the vessels.

What does the industry need to do to ensure LNG becomes a globally used fuel?

For LNG to become a globally used fuel in the maritime sector certain things will need to be done. Now we're starting to see the foundations of these and we're really in the early years at the moment of LNG being used as maritime fuel. However, things like bunker hubs will need to be set up around the world. Now we're starting to see these being developed in places like Singapore, Rotterdam, and other various places around the world. Now also for this to happen, we would need to see ship-to-ship LNG bunker tankers being developed.

Again, we're starting to see these with the new order recently for a vessel that would be stationed in Belgium. The other thing which could help LNG becoming a more seriously taken up fuel in the industry will be fervent subsidies being provided, much as the Norwegian NOx Fund did in the last ten years in…for vessels approaching the Norwegian coast. We can see that being taken up then the industry will take this as a serious fuel. Now we predict that by 2030, 8% of the total global demand of bunker fuel will be taken up by LNG.

Now if this doesn't happen, then there'll be serious consequences on the oil industry because by that time the amount of emission control areas and the global spec which will be enforced by then, it's largely believed that in fact the refiners will not be able to take the capacity of distillate fuel required to propel the worlds fleet.

On January 15th, the highly anticipated #PhaseOne between #China 🇨🇳 and the #US 🇺🇸 was signed. What does this mean… https://t.co/kIuAPerw8d

Guyana's first shipment of around one million b/d of #crudeoil is heading to Galveston. @IHSMarkit Commodities at S… https://t.co/vSM69l4AAt

Over 815 million metric tons of #coal was exported in 2018 by the two largest exporters #Indonesia and #Australia.… https://t.co/WQ2IP6kNGC