Assessing slack: How tight is the French labor market

The French labor market has been a relatively bright spot since the start of 2019. The number of jobs created in the private sector during the first three months of the year (92,800) was the highest since late 2017, a period when the economy was growing well above potential , while the unemployment rate declined to a ten-year low during that period. 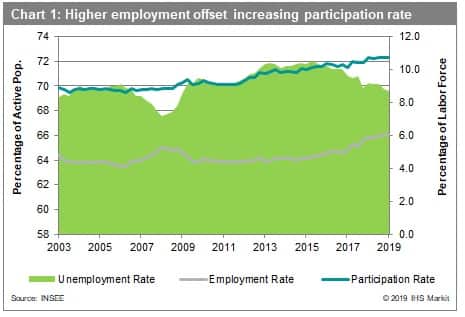 How tight is the French labor market?

The official jobless rate only provides limited information about labor market conditions at a given time. The standard measure of unemployment does not include parts of the labor force who may be willing to work longer hours or those who have dropped out of the labor force altogether.

There are wider measures of labor market slack that help to address these shortcomings. The "broad unemployment" rate, equivalent to the U6 rate in the US, includes the all persons marginally attached to the labor force and those employed part-time for economic reasons.

The wider measure of unemployment (henceforth, the U6 unemployment rate) suggests that the slack in the labor market stands at around 17.5% of France's labor force. The dynamics of France's U6 rate also show an improving picture despite still being elevated compared with other eurozone countries for which a full set of data are available. 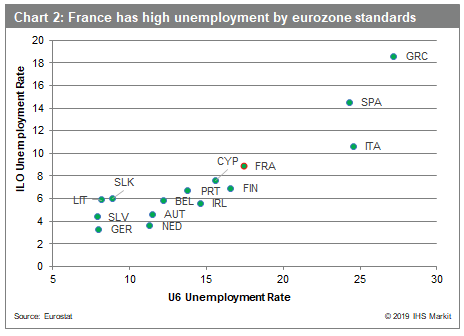 Business surveys point to increasing tightness in labor market conditions. For example, the index measuring labor shortages in the European Commission's quarterly survey has trended upwards since early 2016 and stands well above its pre-crisis highs. This applies for the three sectors for which the survey is compiled (construction, industry, and services; see Chart 3). 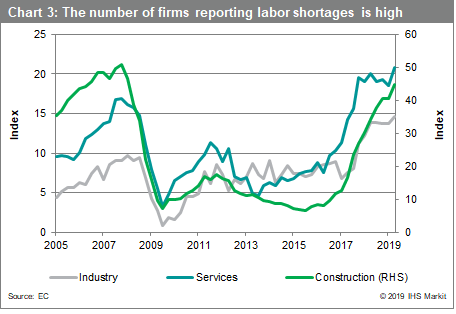 Meanwhile, France's vacancy rate - which measures the number of vacant job openings as a share of total vacancies during a particular quarter - has increased steadily in the past five years and currently stands at its highest level since at least 2003. 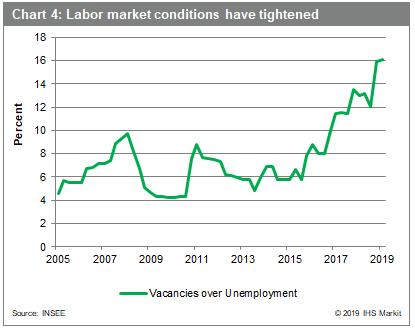 This suggests that labor market conditions in France have become substantially tighter despite the unemployment rate remaining one of the highest in the eurozone. This points to high structural unemployment. Using the OECD estimate of France's non-accelerating inflation rate of unemployment (NAIRU), it is possible to conclude three things. First, France's NAIRU is high compared with other eurozone countries. Second, the NAIRU remains above an average of 8.7% in the years leading up to the financial crisis. Third, the difference between the observed unemployment rate and the NAIRU has narrowed since peaking between 2013 and 2015, providing further evidence of increasing labor market tightness. 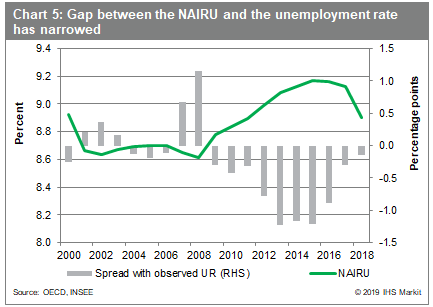 French nominal wages (measured by the hourly wage index published by the INSEE) have gradually trended upwards since the start of 2015. Wage growth reached a near five-year high during the fourth quarter of 2018 and accelerated even more during the first three months of this year, although the first quarter figures were distorted by one-off factors. 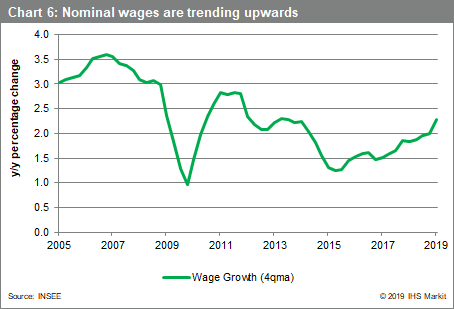 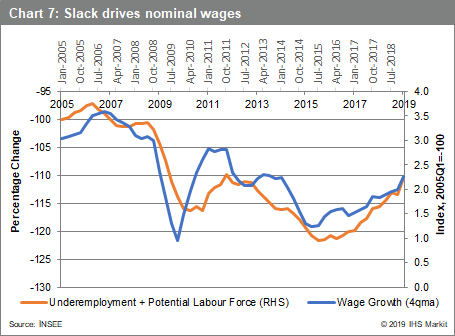 Our analysis also suggests that, despite unemployment being an important explanatory variable, productivity gains are the most important determinant of wages. As employment creation has remained strong despite decelerating output growth, growth in productivity per hour has decelerated substantially in recent quarters, suggesting that wage growth developments over the short term may be weaker than implied by the fall in the unemployment rate.