One of the key milestones from the COP26 climate summit was the pledge to phase out coal and stop building new projects. The Global Coal to Clean Power Transition Statement signed by forty-six countries aims its signatories to accelerate a transition away from unabated coal power generation (Source: Global Coal to Clean Power Transition Statement). Despite some criticism that major economies including US, Japan, China and India are missing, signatories include the world's large emitters such as Germany and South Korea, as well as 23 countries that are committing for the first time to end reliance on coal. Under the statement, major economies pledged to achieve a transition away from unabated coal in the 2030s, while the rest of the world will crease coal plants in the 2040s. Although it's not a globally binding agreement and hence no penalty will be imposed for non-compliance, the mounting peer pressure and incessant monitoring by civil society groups on signatories' progress towards meeting the goals are expected to make a significant contribution to achieving the global energy transition.

Among signatories, Vietnam's commitment to cutting off ties with coal caught many by surprise. Vietnam has been viewed as the fast-growing economy calling for more coal, not less - the country is the world's 12th largest coal power generator, with its coal share in the electricity supply rose to 43% in 2020 from just 17% in 2010. The electricity demand more than doubled during last decade and will likely double again in the next 10 years. According to the pledge, not only Vietnam is required to halt unabated coal-fired power plants construction, but the country also needs to suspend the operation of 22GW coal fleets before 2040, a much harder task given the huge opportunity costs associated with stranded assets.

The thorny problem with Vietnam's path toward coal phaseout is that most of its operating plants is still less than 10 years old. These plants will likely run well beyond 2050 given their technical life of 40-50 years. According to the IHS Markit's Asia-Pacific power asset database, Vietnam has the highest share of young coal operating fleets among large power markets in Southeast Asia, making up 82% of total coal capacity. Indonesia and the Philippines - both endorsed the coal phaseout pledge alongside Vietnam, but with caveats - also rely on young operating fleets. If the Vietnamese government succeeds in retiring all the remaining coal plants before 2040, at least 28GW of coal-fired power plants - including 90% of the operating plants equivalent to 20GW capacity and 8GW under construction -will face early retirement or be repurposed to cleaner options. Formulating the regulatory scheme for compensating existing shareholders and investors and exploring low-carbon alternatives to coal will likely emerge as key discussion topics in coming years. 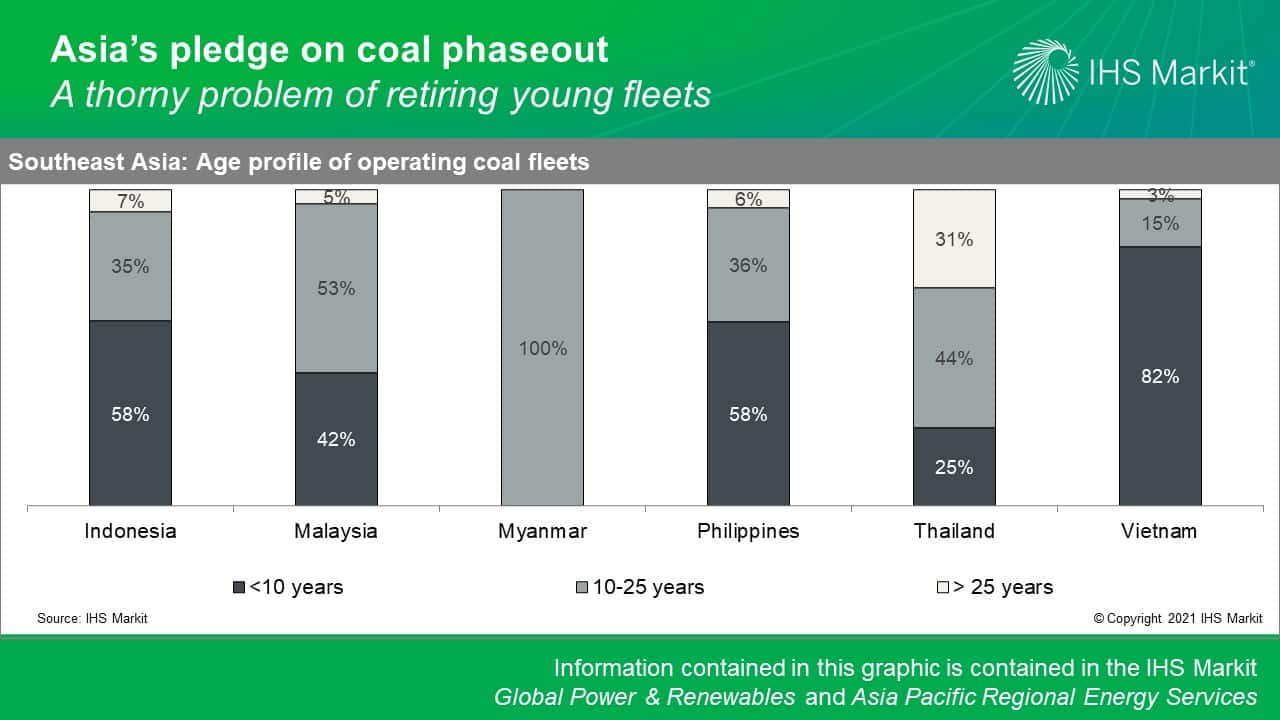 The Energy Transition Mechanism (ETM) announced by the Asian Development Bank (ADB) during the COP26 climate summit aims to address some of these challenges in accelerating coal retirement in Southeast Asia. The ETM is a funding vehicle to phase out coal while scaling up renewables in the region, with the target to raise a total of $3-5billion for two facilities - coal retirement facility and clean energy financing facility. The bank's ultimate aim is to retire 50% of the coal fleets in Indonesia, the Philippines and potentially Vietnam - equivalent to approximately 30 GW - over the next 10 to 15 years. This ambitious plan raises an important question - are there enough clean energy projects being developed to fulfill the void of young coal power plants, let alone to meet the rising electricity demand?

According to the IHS Markit's Renewable Additions Index which tracks the level of non-hydro renewables in total power pipeline, Vietnam is ranked at the fourth out of 16 countries. This relatively high rank is mainly attributed to over 36GW capacity of solar, onshore and offshore wind pipeline, but still fall short of the electricity generation required to replace coal. As the international community and banks will likely continue to shun fossil fuels, countries with high exposure to coal will need a significant ramp-up in building new renewable energy project pipeline.

RT @EconomicsRisk: Sharpen your view of global threats and increased energy security at #Geostrategy2022, and gain a plan for turning risks…