Asia sector data give insight into first areas of recovery

April PMI data pointed to a severe contraction in global business activity, with the coronavirus pandemic and resulting lockdown measures crippling economies around the world. The J.P. Morgan Global Composite PMI™ plunged to a new low, eclipsing the previous record set during the global financial crisis, as 57 of the 64 national surveys* registered unprecedented declines in output.

Beneath the surface of the global trend, we saw two broad themes. Firstly, economies facing their first full month of lockdown suffered historic contractions in business activity. This included countries like the US, Mexico and India, as well as many European and Middle Eastern nations. Meanwhile, the picture in some East Asian economies was slightly different, most notably in China. In these countries the coronavirus outbreak was most severe in February but has been somewhat contained over the past two months. April PMI data reflected that trend, as although output contractions in the region were sharp, they were often slower than those in other parts of the world.

The divergence between regions can be seen even more clearly when looking at PMI sector data. For example, when comparing the six broad sectors which have been severely hampered by the coronavirus pandemic - Basic Materials, Consumer Goods, Consumer Services, Financials, Industrials and Technology - there is a stark difference between regions. In the US and Europe, each of these six sectors registered a sharp contraction in activity during March, followed by accelerated declines in April. This is consistent with the timing of lockdown measures imposed in the US and many European countries; an initial implementation at the end of March, followed by a full month of restrictions during April. 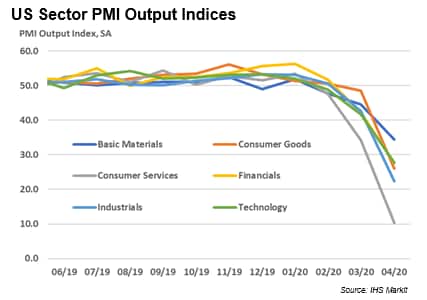 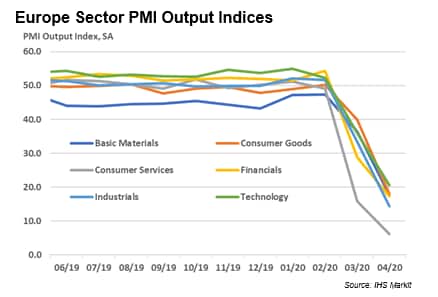 Meanwhile, Asian sector data align more closely with the earlier imposition and removal of measures seen in that region. Across the same six sectors, five recorded their sharpest contractions in February. This was followed by softer reductions in March as restrictions were pared back, before a reacceleration in declines as the effects of deteriorating international demand hit in April. The only exception was consumer services which has been increasingly hindered as the virus spread around the world. 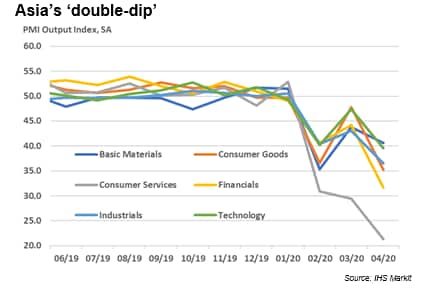 The Asia data show a clear 'double-dip' and highlights that although some declines were softer than during the peak of the outbreak, the region still faces a challenging recovery. That said, there was some positivity to be gleaned from the latest release of Asia sector data.

Not only does PMI sector data track business conditions across broad market segments, there are series available for specific sub-sectors. The April sub-sector results were particularly interesting in Asia, where both Metals & Mining and Machinery & Equipment posted softer output declines for the second month in succession. The latest readings suggest that contractions in these sub-sectors may be bottoming out and that they could be among the first to record an expansion following the outbreak. In the months ahead, Asia PMI sector data could act as an early guide on which sectors are the first to emerge from the global crisis. 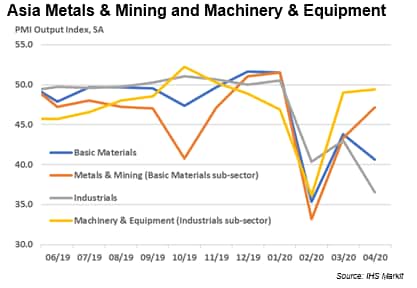 Although Asia can act as a guide for the rest of the world, regional idiosyncrasies will likely see sectors recover at different rates in different parts of the world. All PMI sector data will therefore play an important role in accessing the shape of global recovery. During the pandemic, the US data have revealed a vast outperformance by Healthcare companies. Upcoming releases of PMI sector data will give the first insight into which sectors will narrow the gap. 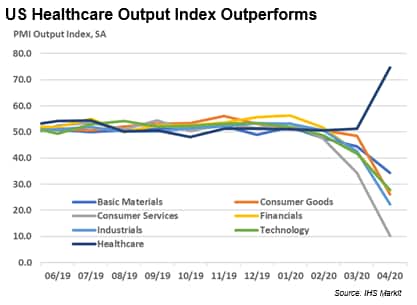 The timely nature of PMI sector data, released just five working days after the end of a reference period, makes it an invaluable tool for guiding both business and investment decisions. That importance is heightened in a time of uncertainty such as that we are currently experiencing. The next release of global PMI sector data on the 5th of June will include May figures, giving an early indication of global and regional economic trends, with US, Europe and more Asian economies reopening businesses gradually.