There are currently 695 offshore wind projects worldwide, according to IHS Markit's Petrodata Fieldsbase. Asia-Pacific (APAC) hosts 46% of global offshore wind projects, of which 24% are in mainland China. Chinese offshore wind leads the region with 52% or 166 of the projects in APAC. The pace of development is also accelerating in other APAC nations, with a significant number of projects located in Japan (49), South Korea (48), Taiwan (29) and Vietnam (23). 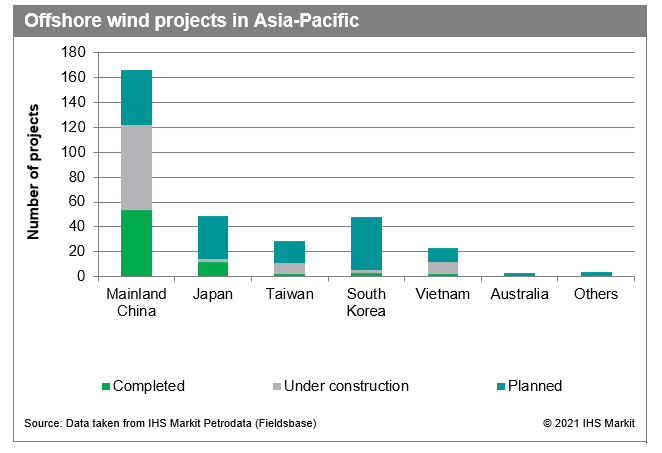 The rapid growth seen in Chinese offshore wind capacity is spreading to other regions of the world. Figures from the Global Wind Energy Council's (GWEC) 2020 annual report for 2010 through 2020 show the annual number of new offshore wind farm installations worldwide increased by an average 24% each year. From just 2 GW of global offshore wind power output in 2010, generating capacity grew by an average 30.7% annually, totaling 29.1 GW in 2020.

Despite challenges created by COVID-19 lockdowns, 6.6 GW global offshore wind generation was added in 2020, 8.2% more than in 2019. Mainland China overtook Europe, installing 4 GW compared to Europe's 2.3 GW. The rest of APAC added only 0.3 GW last year, but even this was three times more offshore wind capacity than it had ever installed before.

South Korea is targeting an ambitious near 10-fold increase in wind power generation. From the current 124.5 MW, it seeks to boost offshore wind power generating capacity to 12 GW by 2030 and 20 GW by 2034. The country currently has three offshore wind farm projects underway. For both wind farm developments and the development of relevant technologies, South Korean firms frequently undertake joint ventures, often in partnership with government agencies.

Vietnam has developed only 1% of the 160 GW of offshore wind generating capacity within 5-100 km from shore. The country currently has the Cong Ly Construction-Trade-Tourism-developed 99.2 MW Bac Lieu nearshore wind farm operational in the Mekong Delta region. The first phase was commissioned in 2013 with 62 units of 1.6 MW wind turbines. The Bac Lieu wind farm became fully operational in January 2016.

Mainstream Renewable Power and Phu Cuong Group are building Southeast Asia's largest offshore wind farm. Construction of the 1.4 GW Phu Cuong Soc Trang offshore wind farm in Soc Trang province is expected to commence in the third quarter of 2021. The offshore wind project will be developed in two phases comprising 400 MW for phase one and 1 GW for phase two. Phase one, which will feature between 29 and 45 wind turbines, is targeted to be operational in 2023.

Australian power is 79% derived from fossil fuels, with coal and gas accounting for 79% of electrical generation. Australia has no operational offshore wind farms, but three projects are in the planning stages. These are Star of the South off Victoria, Newcastle Offshore Wind off the New South Wales coast, and Western Australia's Mid West Wind and Solar Project. The country's first proposed project is the 2.2 GW Star of the South off Gippsland, and it could start generating power from 2025. Proposed offshore wind turbines, cables, and substations will connect to the onshore grid at Latrobe Valley, Victoria. 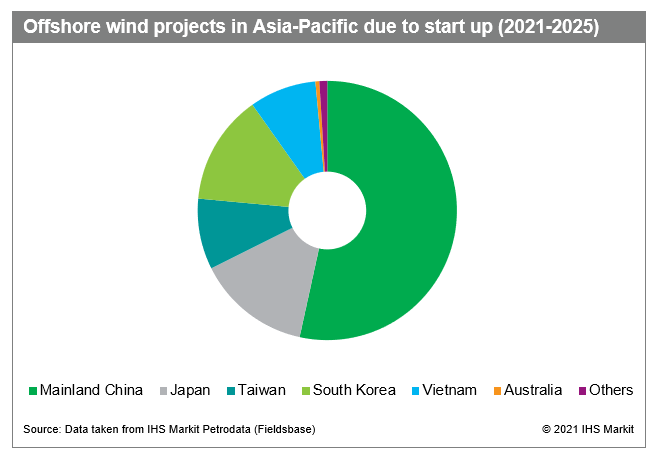 However, the growth of new offshore wind power capacity in mainland China is set to slow down significantly from 2022 due to the phasing out post-2021 of a cost subsidy for the first 20 years of a new wind farm's operation. But the accelerating pace of investment elsewhere in APAC should make up for this: South Korea (12 GW), Taiwan (9 GW), Japan (7.5 GW) Vietnam (5 GW), and the Philippines (1 GW) all intend to increase their wind power capacity by a factor of 10 or more by 2030.

Algena Lee is a senior research analyst at IHS Markit.