ASEAN manufacturing sector remains mired in a downturn in November

The ASEAN manufacturing downturn extended into the middle of the fourth quarter, with operating conditions deteriorating for a sixth month running in November, as signalled by the latest IHS Markit PMI™.

The disappointing performance of the sector reflected further contractions in both output and new orders, alongside one of the fastest reductions in workforce numbers since December 2015. Survey respondents continued to note that weak demand conditions were responsible for falling order book volumes and, consequently, production.

Adjusted for seasonal factors, the headline PMI- a single figure indicator of manufacturing performance - posted 49.2 in November to signal a deterioration in the health of the ASEAN manufacturing sector. The average reading for 2019 so far (49.6) is the lowest for four years.

Majority of monitored countries in decline

Country-level data highlighted further divergences during November. Vietnam, Myanmar and the Philippines reported improvements in operating conditions, but Indonesia, Malaysia, Singapore and Thailand recorded a deterioration in the health of their manufacturing sectors.

Notably, the last time a majority of the seven monitored ASEAN countries reported a sub-50.0 headline PMI reading was 13 months ago. 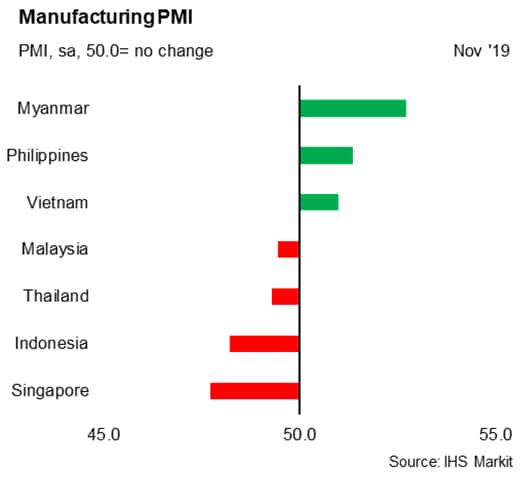 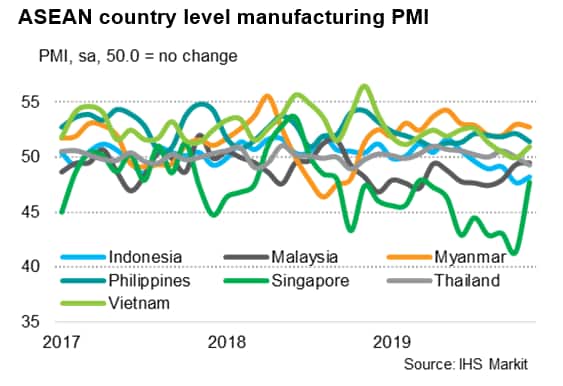 For the tenth month in a row, Myanmar posted the highest PMI reading of the seven monitored ASEAN countries. At 52.0, the latest figure signalled a solid improvement in the health of the manufacturing sector, driven by a marked increase in new orders alongside solid output growth. Moreover, the PMI's 2019 average is the highest seen during the four-year history of the Myanmar survey.

Following closely behind is the Philippines, which has registered headline figures only slightly below Myanmar in every month since August to place as the second-best performing country in our ASEAN rankings. Here the moderate improvement in operating conditions seen in November was driven primarily by higher order levels.

Vietnam was the only other country - of the seven monitored - to report an improvement in the health of its manufacturing sector during the latest survey period, with the headline PMI figure signalling a marginal uptick, driven by growth in both output and employment alongside a sharper increase in new orders.

Has Singapore's downturn bottomed out?

At the other end of the scale, Singapore registered another weak performance during November. The headline figure (47.7) signalled a further deterioration in operating conditions and extended the current manufacturing downturn to 16 months. Official manufacturing GDP data, which are currently updated to quarter three of this year, have corroborated the PMI's weakness, recording a contraction of 3% on an annual basis. 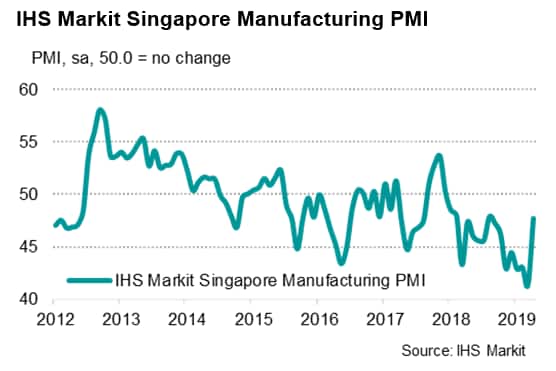 That said, the latest survey data highlighted an easing in Singapore's downturn, with the deterioration easing to the softest pace for eight months, and only a moderate rate overall. This provided a tentative sign that the manufacturing downturn has bottomed out towards the close of 2019. There was a further positive sign for Singapore's manufacturing sector in November, as firms' expectations of output in a year's time were the most upbeat since May.

As such, December's PMI data will provide further indication as to whether Singapore's manufacturing sector is turning around the corner in the final month of the year.

The downturn seen in the ASEAN manufacturing sector is part of a broader global trend. The JPMorgan Global Manufacturing PMI - an aggregate survey indicator compiled by IHS Markit using country-level data - posted below the 50.0 neutral mark for six successive months up to October, before returning to expansionary territory according to the latest survey data (see our commentary on November's global PMI here).

While lagging slightly behind the global PMI, ASEAN continued to compare favourably to the eurozone in November, with the extent of the downturn notably softer in the former. The headline ASEAN PMI has outperformed its Eurozone equivalent in each of the past 10 months. 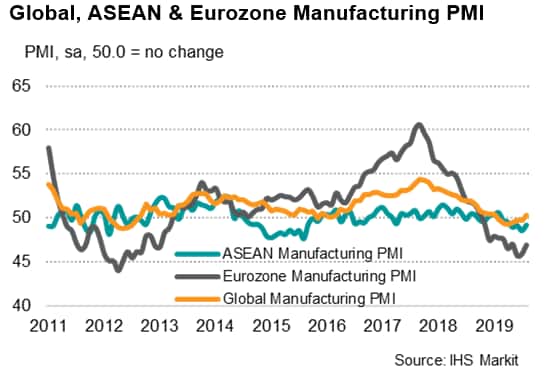 The easing rate of contraction across the ASEAN manufacturing sector coincided with an improvement in business sentiment during November, with expectations regarding output over the coming 12 months improving to a five-month high.

While the November data showed some encouragement, a potential recovery can only take root if order intakes pick up and client demand strengthens in the coming months. 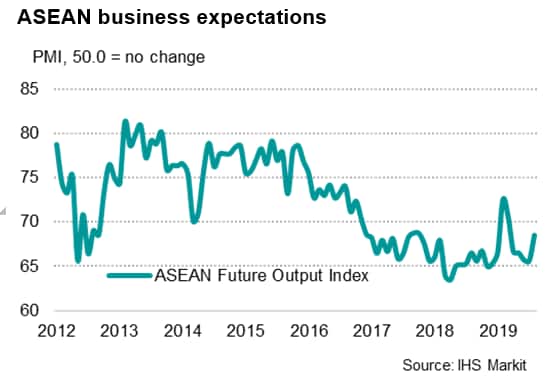