Across Europe, there are a multitude of markets and services that network operators utilize to maintain this balance, the most prominent being; primary, secondary, and tertiary reserve. Primary reserve is the fastest response service, requiring active power to be delivered within seconds. This is followed by secondary and then tertiary reserve for significant power imbalances. The rapid response requirements of the primary reserve market have been well suited for BESS, which became the initial driver for large-scale BESS deployments in Europe. Since then BESS have come to dominate the common European primary reserve market.

Increasing competition in frequency regulation markets across Europe has driven prices down to the point where BESS must utilize multiple revenue streams to build a long-term business case.

In 2017, a number of transmission system operators across Europe launched a consultation on creating a harmonized cross-border procurement of primary reserve called frequency control reserve (FCR). Since then over 700 MW of BESS have been built primarily to provide this service, making up 50% of the 1.4 GW market. Amongst other factors, such as market reform, this has driven prices down by 40% since 2016. Today, BESS are lucky to average €66,800 per MW per year compared to average expected earnings of €141,400 per MW in 2016. In turn, this has slowed the number of front-of-the-meter (FTM) BESS being installed in the common European reserve market.

To drive a profitable business case and thereby new installations, BESS are having to pair multiple revenue streams. For example, in France BESS are able to pair the roughly €25,500/MW/year seven year capacity contract with FCR revenues. In the United Kingdom, BESS are now increasingly able to pair these primary reserve revenues with trading in wholesale markets (particularly the balancing mechanism) which increases overall net revenues. 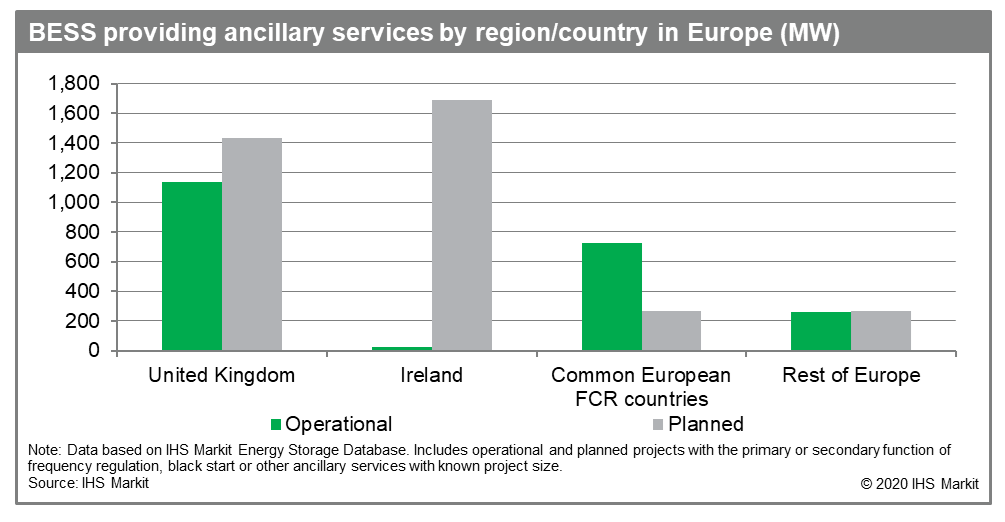 New geographic markets for frequency regulation are developing and will drive near term growth for FTM BESS installations in Europe.

Direct procurements of frequency reserve, such as in Italy, Ukraine or Lithuania, will be the major drivers of new FTM BESS in Europe; however, these will only be one off procurements. The new common Nordic common fast frequency reserve (FFR) market, and Slovenia and western Denmark joining the European FCR market, will provide some smaller pockets of opportunities for new BESS. However, the depth of these markets will be small and so opportunities will be limited.

Overall, FTM BESS in Europe will be shifting focus over the next few years from primarily targeting primary reserve to taking a more flexible approach and participating in a range of energy markets, depending on which offers the best possible returns in any given moment. This is beginning to happen already in the United Kingdom and will spread to regions that already have well established markets for primary reserve (and allow BESS to participate), and eventually to most of Europe. This is a natural progression, as the potentially high value but ultimately shallow ancillary markets saturate, BESS begin to operate a more flexible business models to also participate in the wholesale markets, which are less predictable, but offer much greater depth.

Oliver Forsyth is an energy storage analyst with the Gas, Power, and Energy Futures team at IHS Markit.