As CBAM comes into sight: Direct impact on China’s trade limited, yet a push for renewable power consumption

The European Parliament (EP) and the Council of the European Union (the Council) have approved the fundamental modality of the carbon border adjustment mechanism (CBAM) proposed by the European Commission (EC). Although some of the key design elements are still pending finalization in the upcoming "trialogue" negotiations, it will be worth looking at how CBAM - in its currently proposed form - might affect China's trade with EU and its export-oriented manufacturers.

While the EC and the Council proposed that CBAM should cover iron and steel, cement, fertilizers, electricity, and aluminium, the EP proposed that hydrogen, organic chemicals, and plastics also be included. Regardless of the final scope, China's exports of these products only take up a relatively small share in its total exports to EU. This is because most of these products are located on the upstream of the industrial value chain and energy-intensive, hence are not encouraged by Chinese policies for exports out of domestic supply security and environmental considerations. 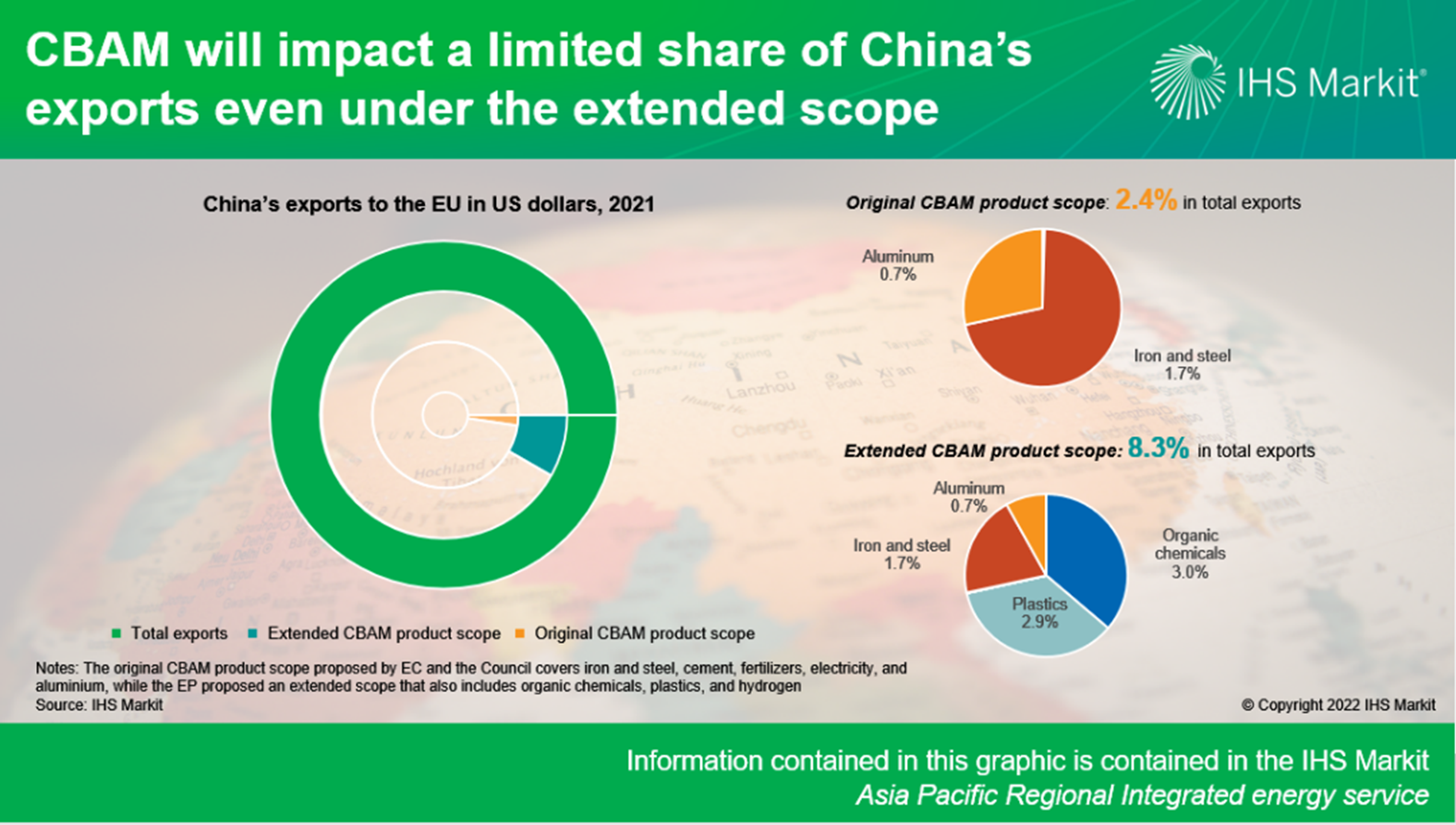 That said, China's exports of CBAM-covered products will incur net positive cost adjustments once CBAM comes into force, as China's domestic carbon costs will be lower than that of EU in all likely cases. However, the relatively high share of free allowances on the side of EU ETS will limit the overall cost adjustment obligations especially before 2030.

Although the direct impact on trade may seem limited on a national level, the implementation of CBAM will nonetheless impact export-oriented manufacturers in many profound ways. With CBAM effectively levelling the carbon costs between EU and the exporting region, exporters will need to look at ways to reduce their product carbon intensity to enhance competitiveness by improving energy efficiency, burning lower-carbon fuels, and optimizing production processes.

In particular, Chinese exporters will be incentivized to increase renewables consumption should the EU policymakers decide to also include indirect emissions from electricity consumption under CBAM. Chinese exporters will not be particularly competitive on this regard otherwise, as the average carbon intensity of China's grid power will still be higher than many other markets owing to its reliance on coal for power generation.

Meanwhile, China will continue developing its national ETS to encourage more aggressive emissions reduction efforts while retaining more carbon revenues within border. More energy-intensive sectors will be included in the carbon market, with carbon prices also expected to rise steadily. Still, China's strong tendency to rely on command-and-control measures means that ETS will play more of a complementary rather than leading role in China's climate toolbox, with its domestic carbon prices likely remain structurally weaker than many other markets where the role of carbon pricing is much larger.

Learn more about our coverage of the Asia Pacific gas and power market through our Asia-Pacific Regional Integrated Service.