Of the six important transformative technologies tracked by Digital Orbit, the new executive briefing from IHS Markit, Artificial Intelligence (AI) will have the largest impact in the next three years, research from the study indicated.

The finding from Digital Orbit showed AI garnering the highest score in 9 out of 10 measures on impact, a key metric used by the study to gauge how influential each technology will be across a range of industries.

All told, AI was well ahead of second-ranked Cloud and four other technologies, including 5G, Blockchain, IoT, and Video Everywhere / Ubiquitous Video, as shown by the graphic below. 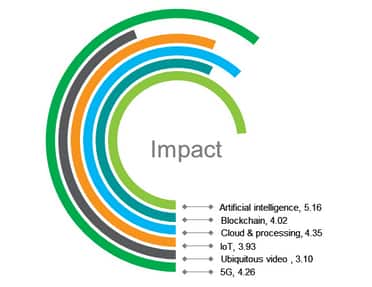 The high AI score on impact was awarded by Digital Orbit's two focus groups: IHS Markit analysts on the one hand, and a select pool of industry and corporate leaders on the other. Members of the latter group also serve as respondents to the Key Influencer Survey, which appraises the prospects and significance of each transformative technology.

Artificial Intelligence owes its lofty standing on impact to at least two factors.

For one, AI is at an especially powerful moment of development. The technology is advanced enough for its anticipated impact to be meaningful, but it is also at a relatively early stage of growth and expansion that analysts and potential industry adopters alike believe its greatest impact still lies ahead.

Also accounting for AI's high impact score is the collective sense that more technological advancements are in store for the field. Simply put, the AI of today will not be the AI of tomorrow.

For instance, AI is deployed in most applications today to handle or control specific tasks, a stage of development commonly referred to as "narrow AI" or "weak AI." The AI of the future, in comparison, will be game-changing, resulting in a much broader transformative impact on a variety of industries, endowed with a greater capacity for human-like intelligence while also able to process data at unprecedented speed.

Moving forward, driving advancements in AI will be breakthroughs in computer processing power and communications technology, which in turn will spur an explosion of collectable and analyzable data. A cloud-AI-based deployment will also help advance AI further, enabling more computing power to tap into artificial neural networks (ANN) or deep learning networks, both of which require data centralization and massive computation.

Aside from achieving high marks on impact, AI scored strongly on readiness, the other key measure in Digital Orbit, which evaluates the readiness for adoption of each transformative technology across various industries. The high score here was driven largely by feedback from the Key Influencer Survey, with most respondents believing AI will be adopted quickly in their industries.

On this front, however, IHS Markit believes the high readiness score of AI requires closer examination. It is possible that the current rapid adoption of AI in initial applications, combined with the considerable media hype showered on the technology, might be giving rise to misconceptions—or even downright erroneous notions—about AI's readiness for wider-scale implementation. And given that many industries are still figuring out how to best utilize or deploy this powerful but relatively new technology, the high readiness score of AI strikes IHS Markit as even more of a surprise.

From this standpoint, the readiness of AI is likely lower than many would expect. In fact, AI adoption will vary greatly, depending on the industry adopting AI and on the use case for the technology. While the future of AI is bright, its implementation—especially in complex human-level AI applications—will take time.