Article: Spotlight on the impact of Covid-19 on the bulk carrier freight market

The first six months of 2020 have been marred with uncertainty for bulk carrier vessel providers and the freight rates they can achieve, with the market having been significantly affected by the impact of macroeconomic events on key supply and demand drivers. Ongoing developments in the supply of oil have combined with a steep drop in demand caused by the Covid-19 crisis, leading to a softening of freight rates through the first two quarters of the year.

Back in early March, the OPEC-led (Organization of the Petroleum Exporting Countries) supply pact collapsed which temporarily ended three years of cooperation and started a battle for market share. A free-for-all ensued, with total production among OPEC members increasing to an average of 30.25 million barrels per day in April (bpd), up 1.61 million bpd compared with March. April's output represented a 13 month high for OPEC. Producers ultimately agreed a new cutback agreement from 1 May, however the dramatic oversupply of product into the market in the preceding month, coupled with demand for oil collapsing due to Covid-19 lockdown restrictions, caused the oil price to tumble. In late April, the price of West Texas Intermediate (WTI) crude oil for delivery in May fell briefly into negative territory as concerns over storage availability rattled the market.

As briefly mentioned above, the oversupply of oil barrels and its impact on oil prices was compounded, concurrently, by an enormous reduction in demand for oil due to the implementation of lockdown measures imposed to stem the spread of Covid-19 globally. Travel was greatly restricted, reducing the number of planes in the sky and vehicles on the road, and significantly for bulk carrier vessels, many ports around the world introduced lockdown and quarantine measures of their own. In India, many ports declared force majeure in late March as the country began its lockdown, while China, the Philippines, Indonesia, Australia and South Africa, to name a few, all banned crew changes and ordered quarantine period for ships coming from ports belonging to "countries at risk." These measures sparked nervousness among charterers moving material due to worries over whether they will have to pay for delays due to any coronavirus-related logistical complications such as enforced quarantine periods.

Covid-19 lockdown measures led to a dearth of demand for bulk carriers from charterers, and a comparatively high of supply of available bulk carriers from vessel operators which, combined with the drop in bunker fuel costs, led to a sharp decrease in freight rates. 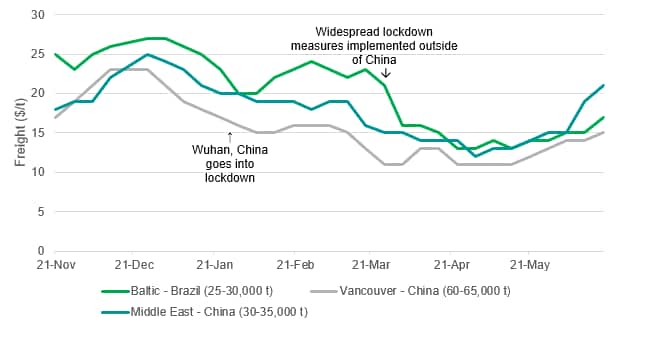 As illustrated in the graph, in mid-March the freight rate for a 25-30,000 t bulk carrier travelling from the Baltic to Brazil was indicated at $22-23/t. This is around the exact time when oil production globally was increasing, leading to lower oil prices and which ultimately translated into lower bunker rates for vessels, thereby allowing operators to reduce their rates. Also, at this time lockdown restrictions were beginning to be implemented by countries all over the world, greatly reducing the demand for bulk carriers as consumption of non-essential goods collapsed. While grains and fertilizers were designated as essential goods and thus largely exempt from lockdown restrictions, there had been concern that export quotas out of former Soviet Union states for grains could reduce demand for ships moving grains. At times of low demand for vessels, rates will fall as operators try to entice business through lower prices, and looking at the graph we can see this is how it played out. At the start of April, the freight cost estimate for the Baltic-Brazil route had fallen from $22-23/t in mid-March to $16/t, before falling further as April progressed to as low as $13/t.

A similar trend was witnessed in the chemical tanker space, with demand and general activity reported to be greatly reduced mid March as lockdown measures were being implemented. Fixing and organising the logistics for many shippers and brokers was also understood to be taking longer than usual per ship, partly due to reduced worker availabilty in order to comply with new social distancing rules.

The uncertainty in the chemical tanker market has continued into June, with the timeline of recovery in post restrictions Europe unclear. Many downstream chemical producers and manufacturers in the automotive, household, yearn and textile and electronic industries have high stock levels and will not be in a position to move a significant amount of material until end-user demand improves.

With countries beginning to move out of lockdown and loosen restrictions, along with the gradual recovery of crude oil prices, bulk freight rates have shown signs of recovery in recent weeks. Vessel supply and demand looks to be rebalancing as counties open up and try to return to as close to "normal" as possible. Looking again at the Baltic-Brazil line in the graph, we can see that after hitting $13/t again in mid-May the rate has been firming, last reported at $16-18/t. This indicates that demand for bulk carriers is recovering, allowing operators to achieve higher rates. Similar trends can be seen with Vancouver-China and Middle East-China rates also illustrated in the graph. Vancouver-China rates have recovered to $15/t from a low of $11/t, while Middle East-China rates have improved significantly to $21/t, up from $12/t in late April.

Nevertheless, the outlook for the bulk carrier shipping market remains somewhat unclear and will be heavily dependent on how long lockdown measures and travel restrictions persist. Demand for transportation, which according to BP accounts for around 55% of global oil demand, is not expected to rebound to pre-Covid levels quickly. The impact of lower demand for transport will add to the decrease in demand for fuel caused by diminished economic activity. With demand for oil globally reduced, it is therefore not unreasonable to expect that it may take some time for freight rates over some routes to recover to pre-pandemic levels.

With the potential of a second spike remaining a credible threat in some regions over the coming months, the freight market will undoubtedly be keeping a keen eye on any future developments which could throw the industry back into limbo.

The #supplychain crisis is the first major disjunction of its kind to the global system in 30 years & @IHSMarkit ex… https://t.co/rD6fPOLddR

New @IHSMarkit analysis: Why a ban on US #LNG exports would risk higher prices for domestic consumers, be detriment… https://t.co/UJSIRMTDRx