Canned tuna trade flows during Q1 2020 shows stability among top players. However, the Covid-19 outbreak globally impacting industries out of China from March suggests a different scenario in Q2.

With April's customs trade data yet to be released, the latest update as of March 2020 shows top canned tuna supplier to the EU27 Ecuador challenged by increasing Chinese imports, a promising uptrend yet suddenly disrupted in February.

The outbreak effects quickly expanding worldwide, forcing lockdowns and world-wide sanitary measures that highly impacted canning activity in Ecuador from mid-March to date: trade to the EU27 and UK markets are said to be significantly diminished in April - customs data soon to be released.

However, Chinese tuna canning activities and trade resuming in March are likely to offset production gaps due to lockdowns, vessels' crew replacement and movement restrictions, impacting top tuna hubs in the last month.

So far, Papua New Guinea shipments into the EU27 are up 60% and the EU27 leading canned tuna supply into the UK are the highlights for Q1 2020.

Ecuadorian prepared tuna exports to the EU were up by a quarter in Q1: total volume reached 42,000 tonnes, of which 30% is precooked tuna loins. Average price fob customs data reports for the period is 13% down y-o-y.

Within the EU, Spanish imports represented 86% of the total, followed by Italy (5%); Chinese shipments to the UK were none.

The bulk of the exports, prepared or canned tuna, doubled in volumes from the previous period, to 5,000 tonnes.

EU27 imports of canned tuna from Indonesia also increased during the period, by 11.4% to 11,000 tonnes. The bulk was equally shared between fillets known as loins of yellowfin and those of skipjack.

The 37% left was shared between Spain, the UK, Portugal, France and the Netherlands.

While volumes from Seychelles were consistent compared with the previous year, those from Mauritius halved during the period.

Around 75% of the bulk was canned skipjack tuna and the 25% left was yellowfin canned tuna.

Customs data reporting lower volumes from Seychelles, Mauritius, Ghana and Ivory Coast into the EU27 during the Q1 2020 is the result of not including the UK as an EU reporting country anymore since January this year due to Brexit.

EU27 and UK canned tuna imports from Ghana and Ivory Coast totalled 10,400 tonnes for the period, down 32.5% y-o-y - customs data shows incomplete volumes for Ivory Coast as of May 15.

Volumes into the EU27 represented 77% of the total (mainly France and Germany), with those to the UK sharing the 23% left.

Around 23% of total volumes are related to canned yellowfin tuna, with the 77% left to canned skipjack tuna.

As of May 15, the global canned tuna market remains quiet and raw material prices for this commodity continue to decline.

A Chinese industry source noted today (May 15): "Customers are asking us to wait for new orders, they want to check with supermarkets whether more stocks are expected to be needed […] They are not buying fiercely right know, so I believe new orders will come as soon as stocks start to be cleared […] Actually, the EU market is becoming more active these days." 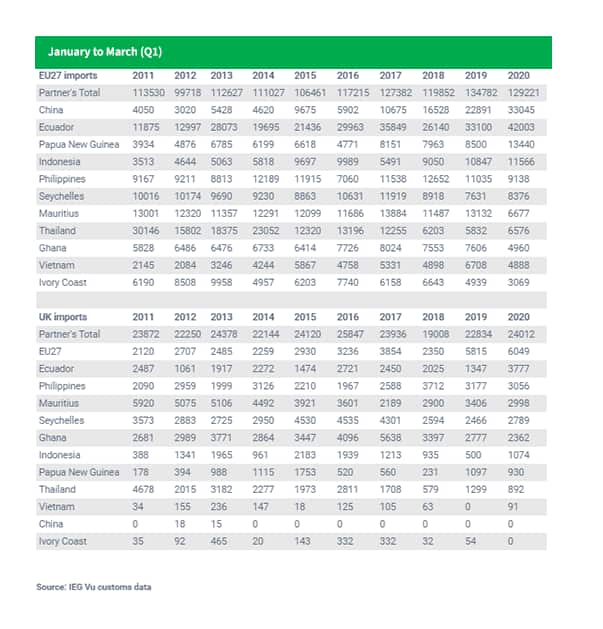