Article: Can the EU meet its new 25% organic target?

This is article is from our policy coverage dated 070720.

Data and political trends suggest that the EU faces an uphill battle to achieve its new ambition of making a quarter of its farmland organic by 2030.

On 20 May 2020, the European Commission released its long-awaited Farm to Fork Strategy (F2F) as part of the European Green Deal - its plan to make the EU climate-neutral by 2050. The overall aim of the strategy is to drive more sustainable food consumption and production in the EU through 27 measures and four aspirational targets.

One of these four F2F targets is to have "at least 25% of the EU's agricultural land under organic farming by 2030". This objective is also mentioned in the EU's Biodiversity Strategy for 2030, another key component of the Green Deal.

According to Agriculture Commissioner Janusz Wojciechowski, reaching this organic target will be instrumental in helping member states achieve the other F2F goals of reducing the use of pesticides, antibiotics and fertilizers.

With so much political weight put on the Commission's 25% organic ambition, it begs the question if it is actually realistic.

Cart before the horse?

The overall share of organic farmland in the EU currently stands at just 8%, according to the European Commission.

Wolfgang Burtscher, the EU executive's newly appointed Director General for agriculture and rural development, acknowledged at the online European Organic Congress on July 2 that reaching the 25% target will be "challenging. He said it will require a "strong commitment" by member states in the design and implementation of their Strategic Plans, in which they will need to lay out how they intend to achieve the EU-wide objectives of the Common Agricultural Policy (CAP) .

The official revealed that the Commission hopes to realise the needed growth in organic farmland by "trying to bring those countries with low shares up". 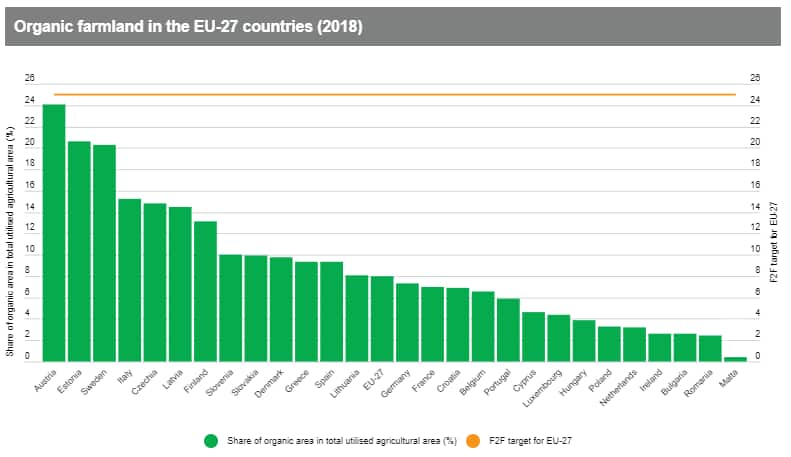 The Commission has therefore highlighted Austria as an example of how the objective is achievable.

But Norbert Lins, the chair of the European Parliament's Agriculture Committee, pointed out at the European Organic Congress that the country's organic market is imbalanced and based on trade.

"The organic retail sector [in Austria] is only 9%, they are dependent on exports to countries such as Germany and Switzerland, especially for crops and milk," the MEP said.

In response, Burtscher said that market demand will be a "key driver of change" to boost organic agriculture and argued that it is "essential" that demand and production "grow in tandem to maintain the sector in a solid equilibrium".

Still, previous EU growth trends for organic production suggest that the F2F's ambition will be difficult to achieve by the end of the decade.

The latest Eurostat figures show that the bloc's organic farming area rose by more a third between 2012 and 2018 (+37%) - from 9.5 million hectares (5.9% of total farmland) to nearly 13 million hectares (8%). This upward trend was driven by an increase in all member states except Poland.

While this is a remarkable increase and arguably a success story, IHS market calculations indicate that a much more rapid expansion will be needed in the coming years.

Within the 2012-2018 period, the annual growth rate amounted to 5.3% on average. At this pace, the share of organic farmland in the EU would reach just 15.6% by the end of the decade (see graph below).

If we take a shorter timeframe, we can see that this growth rate accelerated in the last two recorded years - from 2017 to 2018 - to 6.95%. Assuming that this annual increase continues for twelve years, 19.2% of EU agricultural area would be organic by 2030 - still more than 5% short of the F2F ambition.

Much higher growth will thus be needed to achieve the 25% target by 2030, namely of close to 10% each year. 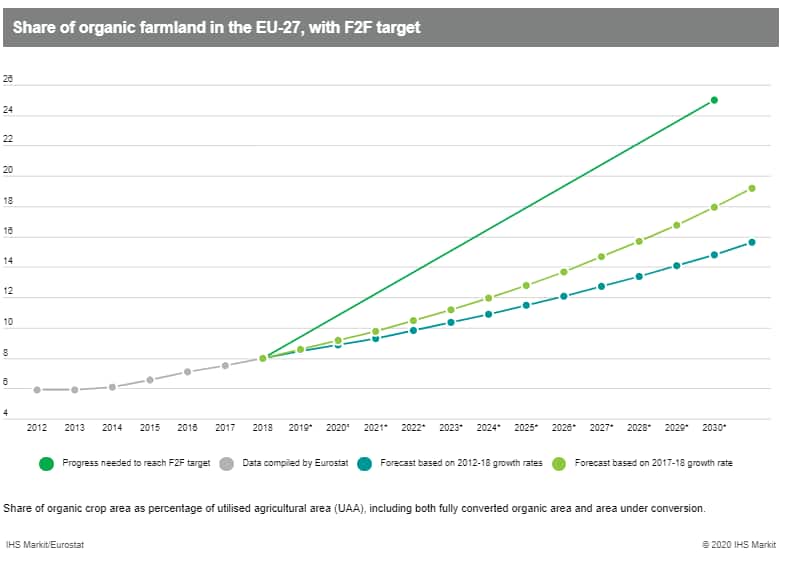 This appears to be a momentous challenge for the European agricultural sector, especially when taking some specificities of the data into consideration.

First of all, the Eurostat figures include both certified organic area and so-called "area under conversion" - land undergoing a conversion process of two to three years (depending on the crop) before it can be certified as organic. This means that large parts of the area that will be counted as organic may not yet be so in practice.

Another important sidenote is that it is arguably easier to have a high percentage-growth from a lower starting number than from a higher number.

The Commission has indicated that the next CAP will be its most important tool to realise the organic transition, most notably through measures such as the new eco-schemes, investment support and advisory services to farmers.

The EU executive has also promised to come up with a specific 'action plan' on organic farming to "help member states stimulate both supply and demand for organic products". The plan is expected to be released in November this year, after a public consultation, and will cover aspects such as support for land conversion, supply chain development, and research and innovation.

In the F2F Communication, the Commission added that it seeks to drive organic demand by using EU promotion schemes and public procurement, through purchasing channels such as school and hospitals.

The update to the EU's organic rules, coming into force in 2021, will also help by ensuring trust in its organic labels, it argued.

The Commission's organic plans met with mixed reactions from the agri-food industry and policymakers.

For IFOAM EU, the organic farming and food association in Brussels, the new 25% target came as a surprise, since the lobby had asked the Commission to aim for just 20% of EU farmland organic by 2030.

But the group still welcomed the high ambition and the accompanying measures to boost supply and demand for organics. IFOAM EU President Jan Plagge called the new EU target a "landmark decision" that puts organic farming "at the core of a transition of European agriculture towards agroecology".

At the same time, Plagge warned that this ambition will only be achievable if it is "fully taken into account in the negotiations on the ongoing CAP reform". The organic movement therefore called on the European Parliament, the Council and the Commission to integrate the objectives into the CAP's Strategic Plans Regulation so that the policy becomes an "effective tool" to incentivise this transition.

However, the Commission has made it clear that it will not change its reform proposals and instead rely on member states' implementation of their Strategic Plans to achieve its new green ambitions.

To justify this decision, the EU executive has referred to a recent analysis which concluded that its CAP reform blueprint is fully compatible with the Green Deal, on the condition that the key provisions of the proposal are maintained and certain improvements are developed. But in practice, this seems unlikely to happen, as agriculture ministers in the Council have been constantly trying to weaken environmental requirements for the future CAP.

Moreover, because there is still no political agreement on this CAP reform yet, the European Parliament and Council have now agreed to a two-year transition period for the farming policy from 2020 onwards, meaning the next CAP is now only set to start in 2023. That means the new policy will have relatively limited time to help speed up the needed organic transition, potentially just seven years, since the next is also likely to run from 2023 to 2030 - the end date for the F2F targets.

The EU's main farming association Copa-Cogeca has been more critical of the F2F organic target. Pekka Pesonen, the union's Secretary-General, said they supported the strategy's direction "in principle" because organic producers generally earn more, but he called the 25% target "overly-ambitious" and claimed it could "kill" the sector if supply outstrips demand.

Members of the European Parliament raised similar concerns regarding the demand-side, saying farming subsidies will not be enough to bring organic prices down for consumers.

Meanwhile, member states in the Council have criticised the EU executive's ambiguity over how the efforts to achieve these targets will be divided, namely whether there will only be an overarching EU-wide target or a more tailored objective set out for each EU country.

The Commission's Wolfgang Burtscher also attempted to reassure participants by stating that they will take the diverging situations in the different EU countries into account.

But Walter Dübner from the Agriculture Ministry of Germany, which now holds the Council Presidency, noted that some member states are very reluctant to have such fixed organic goals.

Such goals could also be difficult to enforce, given that the 25% mark is not enshrined in EU law and the Commission seems reluctant to sanction member states when they fail to achieve the goals under their future Strategic Plans, saying it prefers to solve shortfalls through "constructive dialogue" instead.

Uneven organic ambition between the member states, alongside uncertain growth rates, thus paints an uncertain future. National governments will need to strongly incentivise a switch to organic under their next CAP Strategic Plans and help galvanise a shift in consumer behaviour, otherwise it seems rather unlikely that the new F2F target will become reality on our farming fields.