Article: Animal health's race for the prize has seen decades of change

This article is taken from our animal health platform dated 13/05/20.

Animal Pharm's industry rankings stretch back to 1990. In these three decades, the animal health industry has seen many major names come and go. Animal Pharm editor Joseph Harvey dips into the archives to highlight some trends.

Naturally, the animal health industry league tables from 1990 and 2000 are unrecognizable compared to the current standings.

Not only are the names of the companies very different but also the levels of annual revenues. In 1990, the animal health market was worth only $9.9 billion globally. There were no billion-dollar businesses in the industry and only around $700 million separated the whole of top 20.

All the companies in the 1990 rankings, aside from BASF, were part of larger human pharmaceutical groups - something that can be attributed to only three companies in the most recent standings from fiscal 2019.

Of the 20 firms at the top in 1990, only Bayer Animal Health and Boehringer Ingelheim Animal Health remain under the same guises today. With Bayer's animal health assets set to move to Elanco, Boehringer will become the sole member of this club.

While innovation has stimulated a modest amount of organic growth during the 30 years since, M&A has been the major contributor to the evolution of the rankings.

Over the last five years, the top 20 company with the largest increase in sales has been Boehringer (+257%). This is largely due to its Merial acquisition. The other two firms with triple-digit growth since fiscal 2014 are Dechra Pharmaceuticals and Huvepharma.

The past decade has also been transformative for Boehringer - its animal health business reported less than $1bn in revenues during fiscal 2009. The division has experienced 431% growth across 10 years.

Over this same time period, Zoetis, Elanco, IDEXX Laboratories and Ceva Santé Animale have also posted triple-digit growth. The lowest amount of growth among animal health's billion-dollar businesses since 2009 belongs to Bayer with 29%.

Elanco is about to undergo a transformation - via the purchase of Bayer's animal health assets - similar to the one Boehringer has been through. When factoring in Bayer's 2019 sales to Elanco's total, the latter will have seen 300% growth in the last 10 years. This growth does not factor in the pending divestments Elanco will need to make to overcome anti-trust regulations.

Looking further back to 1999, Merial and Pfizer Animal Health were the only billion-dollar entities in the veterinary medicines space.

In fact, Merial was the industry leader at the end of the 1990s. The French company was number one until 2004, when Pfizer reached the summit. Merck Animal Health took up the gauntlet in 2008. However, Pfizer/Zoetis has been the biggest animal health firm since 2009 - a decade at the top for the US company.

Naturally, the major players have all recorded significant growth since 1999. Boehringer has secured a 1,603% sales increase over two decades. Interestingly, Ceva's 1999 sales total of $140m would not see it register in today's top 20 - also highlighting the major evolution that has occurred at the French company in recent years. 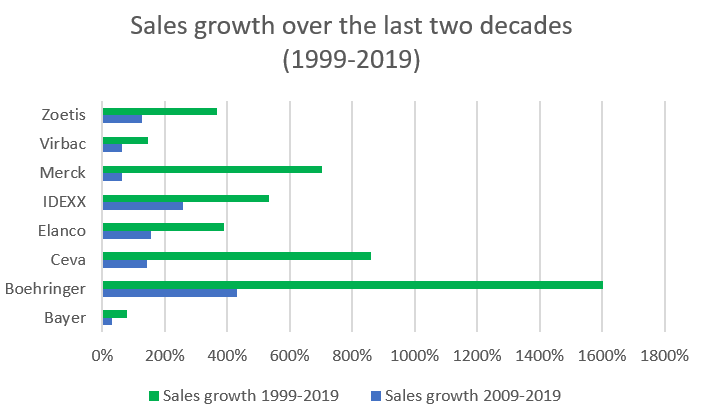 The energy storage market is on track for a record year in 2021 with annual installations set to exceed 10 GW for t… https://t.co/YyVWotubVo