The year 2020 has been filled with surprises as the COVID-19 pandemic spreads worldwide, leaving many homebound, resulting in a negative impact for many industries and ultimately leading to a decline in oil and gas demand across the globe. The pandemic paired with a supply surplus has dramatically lowered the oil price and left the energy industry in a difficult position. Argentina's hydrocarbon sector is no exception. Although Argentina has been producing from conventional formations since 1920's, conventional production has been steadily declining since 2007. Once operators started exploring different drilling techniques and successfully drilled the first unconventional well in 2010, new possibilities opened up for the future of Argentina's energy industry both in the tight gas and shale regions.

Over the years, both international and local operators have applied different frac parameters in the Vaca Muerta play as they work to understand its geologic and reservoir properties. Local operators have followed the example of national oil company, YPF, while major companies such as ExxonMobil, ConocoPhillips, and Chevron, have even taken their unconventional development experience used in their North America assets and have applied it to Argentina to expand and improve their portfolios. Below is a graph showing the progression of lateral length and proppant use in the Vaca Muerta play since 2015, taken from Argentina's Ministry of Energy data bank. 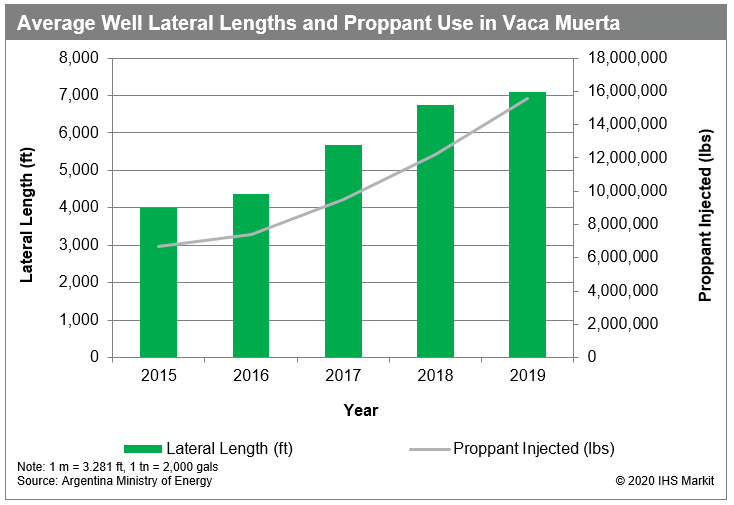 From the graph, it is clear that operators have continuously increased lateral lengths and proppant use as they work to understand the efficiencies necessary to improve production output in Vaca Muerta. Since 2015, average lateral lengths have increased by 77%, and proppant injection has more than doubled. Naturally, as proppant use increases, so does fluid injection. Average fluid injected in Vaca Muerta wells since 2015 has more than tripled, reaching an average of about 13 million gallons of water per well in 2019. Proppant per stage has remained relatively stable at around 440,000 lbs, but the average number of stages per well has increased from 16 in 2015 to 33 in 2019 as operators work to stimulate larger areas of the reservoir rock, overall improving output. Through these efficiencies, along with reduction in drilling and completion times, operators like YPF have reported an estimated 38% reduction in completion costs since 2017 in blocks like Loma Campana.

As operators work on drilling and completion efficiencies, they have become more comfortable with their operations in Argentina's unconventional formations. From the Argentina coverage on IHS Vantage, unconventional activity has increased, with production improving from about 140 Mboe/d in 2015 to approximately 440 Mboe/d by 2019. In 2019, due to an oversupply in Argentina's gas market, operators decided they would shift away from developing the shale gas and tight gas windows of the Neuquén Basin, and would move towards development of projects in the shale oil window instead. This resulted in the black and volatile oil windows of Vaca Muerta becoming more active, with operators like YPF working on continuing full development of its three star assets, Loma Campana, Bandurria Sur, and La Amarga Chica, and Shell announcing its development of the Cruz de Lorena, Sierras Blancas, and Coiron Amargo Sur Oeste oil blocks. Despite the frac and drilling efficiencies improving production output, however, the oil price drop and lower demand place Argentina in a tough position, especially since the country is already billions of dollars in debt.

From the IHS Vantage valuation coverage, with 76% of oil assets resulting in a breakeven price of $40/bbl and above, the current oil price crash makes these projects unprofitable, forcing operators to re-evaluate their short-term investment plans. As operators wait on how the Argentine government will help the hydrocarbons sector, we have applied delays and reduced activity on Argentina unconventional shale oil, gas, and tight gas projects which we believe will be delayed due to the current price scenario and lower overall demand. The production curves represented in the chart below are built taking into consideration company guidance on capital investments for the companies we cover, and do not consider demand constraints or the oil price intervention from the government. For the base case, our oil price assumption is US$40/bbl, with a 2% inflation year on year going forward. 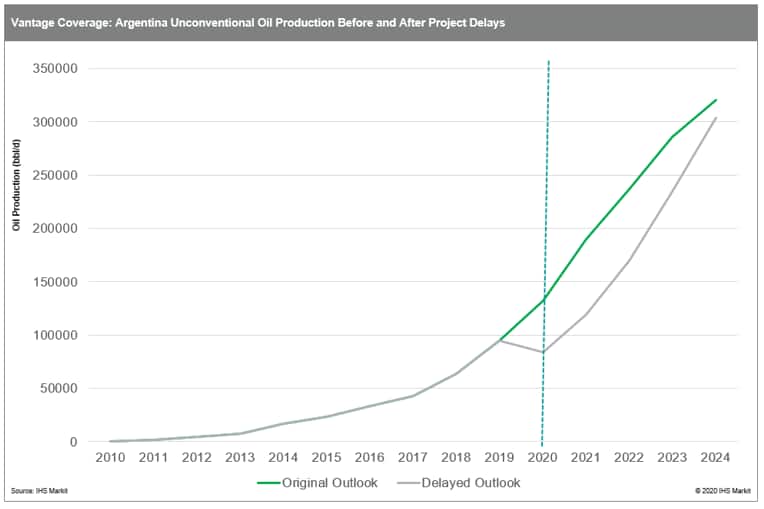 From 2010 to 2019, as both local and international operators entered Argentina's unconventional region and became comfortable with applying varying drilling and completion techniques, there was an increase of about 94 Mbbl/d in oil production. Looking forward, the delay in projects causes a reduction of about 48,000 bbl/d in 2020, and 70,000 bbl/d in 2021 respectively. Though operators shifted focus to oil projects in 2019, the above delays also affect gas production, including the associated gas lost from a reduction in oil production. Gas production is expected to undergo a reduction of about 120 MMcf/d in 2020 and suffer a total estimated loss of about 978 MMcf/d from 2020 to 2024. <span/>The NPV (Net Present Value) of the top 10 assets analyzed by us lose about US$13 billion when oil prices move from US$60/bbl to US$30/bbl.

Government intervention in the Argentine hydrocarbons sector has occurred in the past and is likely to happen again. Talks of the government proposing the "criollo barrel" would freeze the local price of oil in Argentina to a higher price than today's Brent price, which could incentivize further investment and production activity in the sector. Despite government intervention, Argentina still faces the challenge of demand. It is possible that if COVID-19 lockdown measures ease during the second half of the year, demand could increase and activity could start to improve. Until then, we are left on wait-and-see mode as to when Argentine operators will continue to apply their learned efficiencies to unconventional wells.

Paola Romero is a Senior Technical Analyst for the Latin America Vantage team at IHS Markit.