In "Twilight of the Brands" in the February 17/24 issue of "The New Yorker," James Surowiecki discusses the challenges facing brands in today's information-rich US economy. Surowiecki focuses on Lululemon Athletica, a yoga apparel company that quickly became the darling of the industry and then tumbled almost overnight because of negative customer feedback. Such instantaneous customer reaction can propel a company to new heights or spell its doom in the blink of an eye, according to Surowiecki. He also claims "information overload" is a myth, that consumers in fact are adept at efficiently obtaining the information they want. This plethora of information available via the web is increasing the possibility that consumers will switch brands, reducing brand loyalty and rendering brands more fragile. Proof of brands' reduced clout is the lower premiums consumers are willing to pay for them.

Several challenges mentioned by Surowiecki exist in the US light vehicle industry. New car customers today have a huge amount of information at their fingertips, including (among other things) what the dealer pays the manufacturer for a particular model, what the model is actually selling for today in any given zip code, actual incentives, and actual customer feedback about the vehicle and its attributes. With such information seemingly everywhere and available in two seconds via the web, car shoppers increasingly will gravitate to that car or truck that provides the most value, with the brand playing a less important role.

But the new vehicle industry does not readily fit with some of the descriptions provided by Surowiecki. Unlike the yoga apparel industry, the automobile industry is exceptionally capital intensive, with billions of dollars needed to design, engineer, manufacture, assemble and sell new vehicles. The barriers to entry are huge, so few makes actually do enter and survive. The table below shows the makes currently on the US market, along with their US launch years and the number of years they have survived. The average amount of time a new vehicle make has been on the US market is 48 years; only four makes have been on the market less than ten years, and only five less than 20 years. In other words, few makes have recently entered the market and survived. One of these is Ram, which is not completely new but rather a semi-new name (derived from an existing model name) for an existing set of light trucks. Tesla has done well in the past year in terms of sales, but its financial position is not clear. Smart is still here but struggling, with 2013 sales down 7% (in a market up 8%) to just 9,300 cars. Two of the four makes launched in the past ten years are not yet "out of the woods."

Surowiecki uses Hyundai as an example of a make that quickly climbed the sales charts, going from "being a joke to selling four million cars a year." Quickly may not be the correct word – Hyundai launched in Seoul in 1967 and in the US in 1986 (though I admit its rise to one of the largest global automakers in 47 years has been remarkable).

Buyers are still paying premiums for some brands and models in the luxury and non-luxury markets. The Hyundai Genesis competes in the same segment as the Mercedes-Benz E-Class, but the E-Class has a current transaction price in Southeastern Michigan of almost $49,000, approximately 23% above the (comparably equipped) Genesis's transaction price. At the model level, a 2014 Honda Civic sedan is now selling for an average transaction price of $18,469, 11% above a comparably-equipped Dodge Dart. (All transaction price data were obtained from Edmunds.com on February 20, 2014.)

Surowiecki says, "the percentage of brand-loyal car buyers has plummeted in the past twenty years." IHS Automotive make-level loyalty for the calendar years 2008 through 2013 is shown below; it appears to be increasing rather than declining (data prior to the 2008 calendar year are not readily available). These results are derived from actual registration data (not sample data) collected by Polk, recently acquired by IHS. 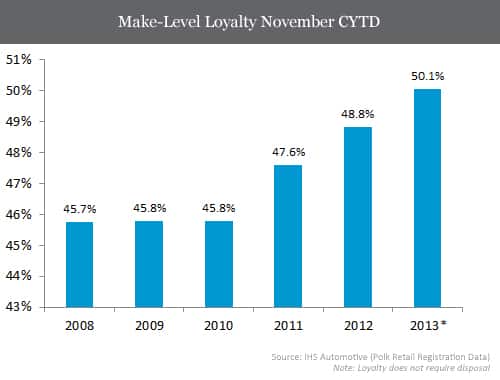 For the auto manufacturer, loyalty remains critically important. Retaining an existing customer within the same make is much less expensive than conquesting a buyer from a competitive make. OEMs utilize several tools to improve make-level loyalty, including leasing (21% of all new vehicle transactions in 2013 were leases) and enhanced relationships with existing customers via the web.

The days of buying one brand because "we've always bought xx" are over, for sure. The internet is changing much of the new vehicle industry in profound ways, including the retail sales process. But brand still plays an important role, in both the luxury and non-luxury arenas, and those makes with substantial clout in the marketplace will benefit.

An Automotive Minute with Tom Libby: US Electric Vehicle Share in 2020 Tom discusses #EV in the United States in 2… https://t.co/njo5gbkqhP

Innovation in the braking sector is now concentrated on “by-wire” solutions. But before we get to Brake by Wire, th… https://t.co/9SAwk7U7iD

Based on component lead time data received by IHS Markit, there has been some significant increases, mainly for sem… https://t.co/GTakIOQDJP