The flash PMI for April highlights how the UK economy has been hit by the COVID-19 outbreak to a degree greatly surpassing anything seen in the survey's 22-year history. Record falls in output across both manufacturing and services have been accompanied by job losses on an unprecedented scale, even if furloughed workers are excluded. Pricing power also collapsed alongside the slump in demand, leading to the largest drop in average prices charged for goods and services ever recorded by the survey.

The dire survey readings will inevitably raise questions about the cost of the lockdown, and how long the current containment measures will last. One ray of light came from an improvement in business optimism about the year ahead compared to the all-time low seen in March. Sentiment about the coming year nevertheless remained the second-lowest ever recorded to underscore how few businesses are anticipating a swift recovery.

The April survey reveals that business closures and social distancing measures have caused business activity to collapse at rate vastly exceeding that seen even during the global financial crisis, the IHS Markit/CIPS Flash UK Composite PMI slumping from 36.0 in March to just 12.9. Note that the index varies between 100 and zero, with 50 indicating no change in output on the prior month. A reading of zero could only be reached if 100% of survey respondents reported falling output. Before March, the prior low in the 22-year survey history was 38.1, reached in November 2008.

The latest 23-point drop in the flash PMI was also the largest seen in the survey history, beating the 16-point drop recorded in March.

The latest survey data were collected between 7th-21st April and, although temporary business closures were widely reported, the overall response rate to the surveys was in line with the historical average. 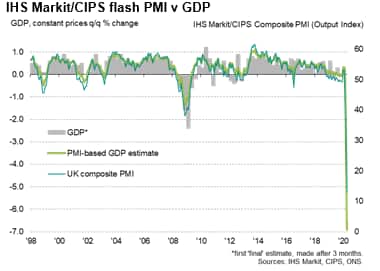 Historical comparisons of the PMI with GDP using a regression model that takes into account the possibility of a non-linear relationship between PMI and GDP data in times of severe economic stress indicate that the April survey is consistent with GDP falling at a quarterly rate approaching 7.0%. The actual decline in GDP could be even greater, in part because the PMI excludes the vast majority of the self-employed and the retail sector, which have been especially hard-hit by the COVID-19 containment measures.

The services sector reported an especially steep record downturn as business in sectors such as tourism, hospitality and recreation saw demand collapse amid the lockdown and social distancing policies implemented to contain the virus. However, factories also suffered a record drop in production, with the history of this series extending back to 1992.

Some 81% of service sector businesses and 75% of manufacturers reported lower output during the month.

While hotels, restaurants and other consumer-facing businesses reported the steepest drop in output within the service sector, with many firms reporting a total halt in activity, the least marked downturn was seen in financial services, though even here the scale of the decline was unprecedented, joining all major sub-sectors of services seeing record falls in business activity by wide margins.

In manufacturing, the sharpest drop in output was registered in the textiles & clothing sector, largely reflecting collapsed demand from the retail sector, though the transport sector, including car production, also reported an especially steep decline. The best performance was seen in food & beverage manufacturing, yet even here the decline in output was the strongest ever recorded by the survey, followed by chemicals & plastics, which was the only sector not to see a record decline. 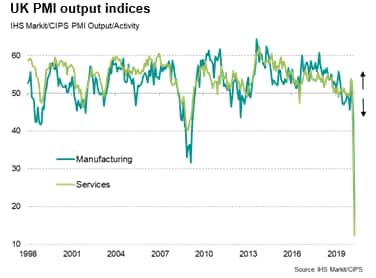 Historical comparisons indicate that the PMI's manufacturing output index is consistent with factory production falling at a quarterly rate approaching double digits. Note that we do not use the headline PMI from the manufacturing survey to gauge the sector's rate of expansion, instead favouring the survey survey's output index, as the former includes various sub-indices such as suppliers' delivery times and inventories which blur the picture in terms of measuring pure production. 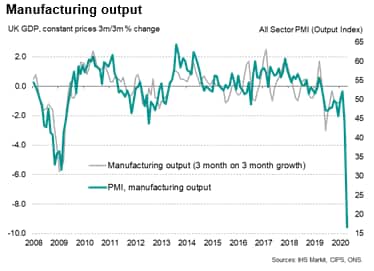 The April survey also signalled survey-record declines in new orders and backlogs of work, which companies responded to by slashing employment. Around half of all survey respondents reported lower staffing numbers in April, although a large proportion of these noted that the fall reflected the use of the UK government scheme to place employees on furlough. However, even if furloughed staff are excluded from the index, the monthly drop in employment was still the largest ever recorded by the survey. 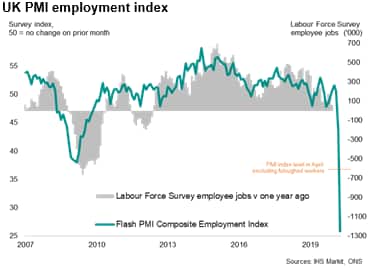 The all-time low prices charged index hints strongly at a further marked fall in consumer price inflation from the 1.5% rate seen in March. 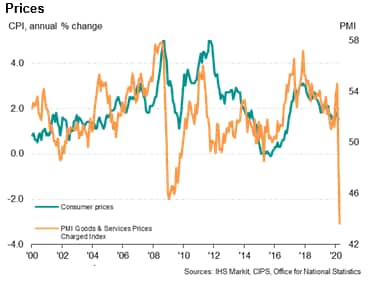 One small positive sign came from an improvement in business expectations for the year ahead compared to the all-time low seen in March as an increased number of companies saw light at the end of the tunnel. However, the overall degree of sentiment remained the second-lowest recorded since comparable data were first available in 2012. Expectations in the service sector, for which data are available back to 1996, rose from March's survey low but remained the lowest since 2008. Manufacturing sentiment about the year ahead slipped to a new low.