The new 13.3-inch MacBook Pro, weighing a mere 3 lbs. and measuring a scant 14.9 millimeters in thickness-is slimmer and lighter than the previous model, offering greater mobility to customers who also desire a high-performance notebook PC. The new model has a touch OLED bar that provides a new touch experience for clamshell notebooks, and features USB type C as its exclusive connector for a slimmer design. The new features come at an increased cost to consumers, however, as they will need to spend extra on peripherals.

On the other hand, the 11.6-inch MacBook Air will be phased out soon, and that could shift potential customers to the 13.3-inch MacBook Air if they are unable to afford the MacBook Pro. For users needing ultra-mobility, the 12.0-inch MacBook is another option.

Because of high inventory in 2015, Apple slowed 2016 production to digest stock. Though the new MacBook Pro launch has received a lot of attention, the price premium for new features like the touch bar could make consumers hesitant in 2017 about purchasing the product, whose base price is a steep $1,799. As a result, IHS anticipates Apple will remain cautious in its 2017 set production while the company transitions products. 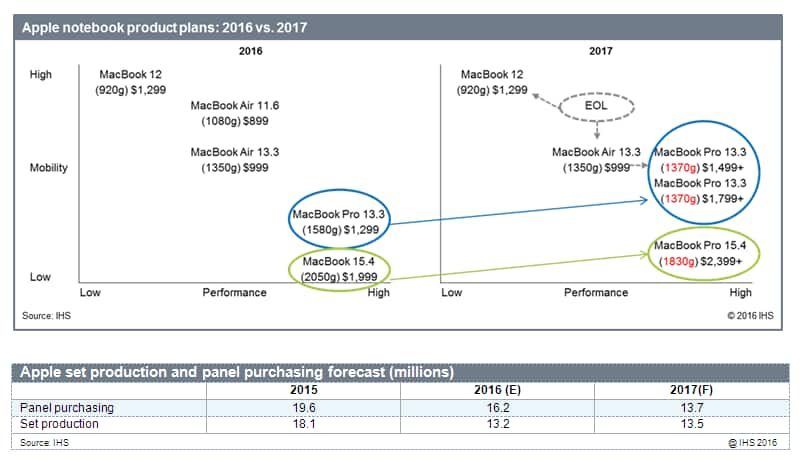 Total panel purchases for the MacBook Air are anticipated to fall from 6 million units in 2016 to 2.7 million units in 2017. The sharp decrease is due not only to the discontinuance of the 11.6-inch MacBook Air, but also because of the need to digest inventory of the 13.3-inch panels accumulated since late 2015.

Meanwhile, Samsung Display has announced the discontinuing of twisted nematic (TN) notebook panels, so Apple has to find a new supplier to maintain its supplier mix. Chinese-based BOE, one such supplier and also certified, began to deliver 13.3-inch panels to Apple in August 2016.

And while Samsung Display is moving strategically toward the organic light-emitting diode (OLED) business, it also wants to continue selling premium oxide panels for use in Apple's notebook products. Even so, Apple has shown concern as the South Korean maker is now shifting current Gen 5 oxide capacity to Gen 8, a move likely to cause a lower production yield. As a result, Apple is diversifying and looking for new oxide panel suppliers in order to reduce risk.

For its part, Sharp has approached Apple as a notebook panel supplier. If Sharp and the affiliates from Taiwan's Foxconn-a major contract manufacturer for Apple that also recently acquired Sharp-wish to provide Apple with LCD modules rather than just cells, they will have to invest in new equipment for BLU production. No decision has been made yet. With Sharp reportedly of late having been awarded the oxide panel business, IHS anticipates the mass production schedule for panels could fall into the late second quarter of 2017 or even later.

Apple may continue to acquire amorphous silicon (a-Si) panels, known for their extended product life, for use in the legacy MacBook Pro until the end of the first quarter of 2017. Soon after, all MacBook Pro panels will be converted completely to oxide. Total panel purchases for the MacBook Pro on both new and old models are expected to grow from 8.8 million units this year to 9.7 million units in 2017. 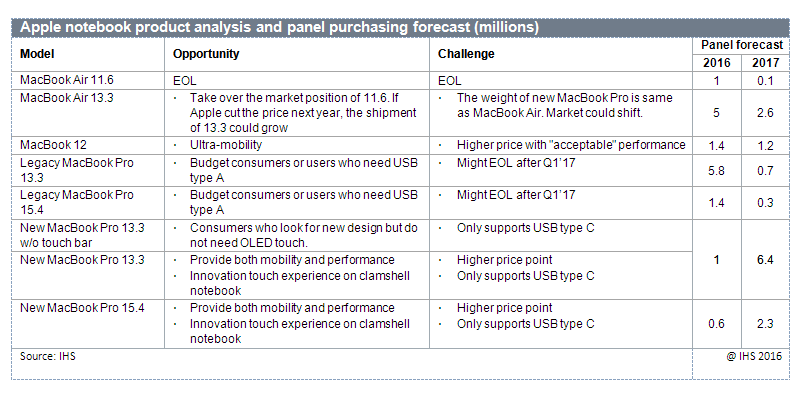 In case you missed our webcast on what's ahead in the #semiconductor industry, you can watch it now on demand:… https://t.co/hjmZsTv4HC

The intruder #alarms market in the Middle East is forecast to exceed $112.0 million by 2023. Nevertheless, the frag… https://t.co/cd9tydAa0w