An update on Mexico bid rounds

Government plans are being changed for Deep Water and Unconventional blocks.

On 2 March 2017 the Secretaria de Energia (SENER) announced significant changes to its Plan Quinquinal for bid rounds to be held in the future including Ronda 2.4 for Deep Water and Unconventional blocks and Ronda 3.1 and Ronda 3.2. The most significant changes include moving to only two bid rounds per year starting in 2018, nominations of blocks, and standard block sizes. The Deep Water blocks are now approximately 1,000 sq km, shelf blocks are 400 sq km, onshore unconventional are 300 sq km, and onshore conventional are 200 sq km. SENER also implemented a block nominations period of three months prior to the subsequent bid round launch.

The nominations period for Ronda 2.4 for Deep Water and Unconventional blocks opened on 2 March 2017 with the launch of the round in June 2017 and reception of bids the first week in December 2017.

The nominations period for Ronda 3.1 for shelf and onshore conventional blocks opened on 2 March 2017 with the launch of the round during August 2017 and the bid reception is scheduled for 2nd week of February 2018.

The nominations period for Ronda 3.2 for Deep Water and Unconventional blocks will open in January 2018 with the launch of the round in April 2018 and reception of bids in October 2018.

SENER indicated it has modified its Plan Quinquinal with input from the public and private sectors and has planned the rounds that will reach until the conclusion of the current administration. 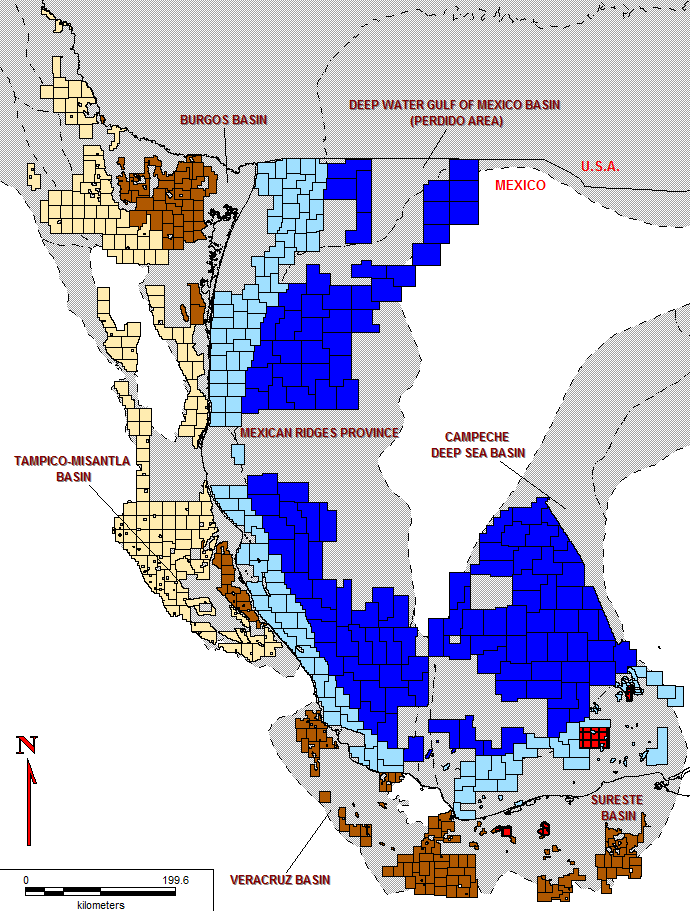 Through March 2017 a total of five bid rounds have been concluded and 39 final awards have been granted out of 55 blocks offered, all part of Ronda 1. The first two rounds offshore had high interest but only limited bidding with 2 of 14 blocks acquired in R1.1, only one block had any additional bids. In R1.2 there was also high interest for the offshore production blocks and three of five were bid and granted final awards. Two of the blocks in the round had additional bids. The R1.3 for marginal onshore fields had high interest with about 96 companies expressed an interest with 63 actually participating in the round. All of the blocks were bid and granted provisional awards. The final awards were granted to all blocks but with some 2nd bidders signing the final blocks. Ronda 1.3 had such high interest that some companies bid government take too high and subsequently failed to sign their contracts with the 2nd place bidders.

The much anticipated R1.4 for deep water blocks was finally held on 5 December 2016 along with the Trion farm-out bid round. The round included 10 blocks and the Trion block so a total of 11 blocks involved in the bid round. There was high interest in the round from major companies around the world and all of them participated in the bid round. A total of nine out of the 11 blocks were bid and provisionally awarded with all of the final awards contracts signed in late February and early March 2017. CNOOC is now the largest foreign acreage holder in the country but BHP with its successful farm-in bid for Trion has the most net to working interest USD commitments. The deep-water R1.4 and the Trion farm-out were viewed as very successful by the government, considering the oil and gas macro environment, even though only three blocks had additional bids. The government learned some lessons from its early Ronda 1 bid rounds and made some changes to the minimum royalties and other clauses in the contracts that were petitioned for by companies, and this improved the attractiveness of the blocks. 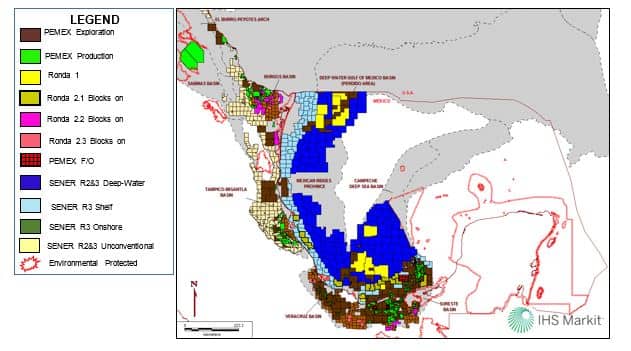 In March 2017 there are currently three bid rounds ongoing and one new farm-out round. Offshore on the shelf the R2.1 is ongoing with 15 blocks on offer and the Ayin-Batsil farm-out round running concurrently although launched somewhat late on 7 March 2017. So far there are 25 companies that have expressed an interest in the round, most being the companies that have participated in some form or fashion in the previous offshore bid rounds. Onshore there are two bid rounds progressing concurrently, R2.2 and R2.3 with 26 blocks on offer. So far there are about 15 companies that have expressed interest in the onshore rounds, down considerably from R1.3 with the 96 companies interested then. Two other onshore farm-outs are expected to be launched to run concurrently with R2.2 and R2.3. These are the Cardenas-Mora block and the Ogarrio block.

#Energy companies have pledged to meet #net-zero carbon emissions by 2050. Achieve these goals with our end-to-end… https://t.co/RWxZ8rbS9n

Energy security vs energy transition: Will climate goals take a backseat against the lure of improved economics for… https://t.co/8bnzIhM6A5