An old new approach in the Brazilian FPSO market

As FPSOs in Brazil reach new levels in terms of production capacity and topside weight, a new approach in procurement and construction emerged. Some ten years after the first unit installed in the pre-salt, the upcoming ones will be capable of producing twice as much oil and four times as much gas. The greater volumes, along with other specificities of the projects related with the amount of contaminants in the flow and the need for larger process equipment, caused a huge impact in the topside weight.

The growing size of the FPSOs stumbled into the limitations of the converted hulls, the market's preferred choice for new units. Even the largest hulls available for conversions - the VLCCs (Very Large Crude Carrier) would force the topside design to grow in height, with more levels. Higher modules become more complex, demanding more secondary structural steel and construction manhours, and making integration even harder. Another issue related to the topside height is the loss of stability due to the higher center of gravity.

Only a new build hull can offer a deck area big enough to better distribute the topside in less levels. However, building a hull from scratch takes considerably longer than converting one, deferring the beginning of the production and consequently the generation of cashflow. To cope with the demand for bigger FPSOs and mitigate the time consumed to build new hulls, the market turned to the standardization.

This recent approach isn't at all unseen in the market, particularly in Brazil. In the early development of the pre-salt, Petrobras opted for an EPC model with local shipyards for standardized FPSOs. These units, known as the Replicants, suffered considerable setbacks during the construction, highly impacting their delivery schedule.

Now, Petrobras revisits the standardization strategy with its new Reference Project, beginning with P-78 and P-79 awarded in 2021. The new design includes technical features such as amine absorption systems to deal with the high presence of H2S, and heavy use of digital solutions. However, the biggest change when compared to the Replicants, is probably in the procurement strategy and contractual model. The operator hired one company (or consortium) that will be responsible for the whole construction, including the hull, topsides, and integration, including the procurement of critical equipment. Petrobras expects that by better selecting the contractors, reducing interface and better modeling contract to better align the interests, the issues faced with the Replicants will be avoided.

The current trend is not limited to the operator or the Brazilian market. SBM and MODEC, the two market leaders in big FPSOs have standardization programs of their own. The Dutch already delivered one unit and two other hulls under its Fast4Ward™ program. Three more hulls are under construction. MODEC so far has only one generic hull under construction.

A key outcome of this approach is that facing the possibility of allocating the hull to a wide range of projects in the global offshore pipeline, the leasers may start construction even before the award from the operator. With seven standard hulls in the market, it is already possible to assess the impact of this strategy in the projects' schedule. The average time saved between the first steel cut of the hull and the FPSO award is over 300 days. 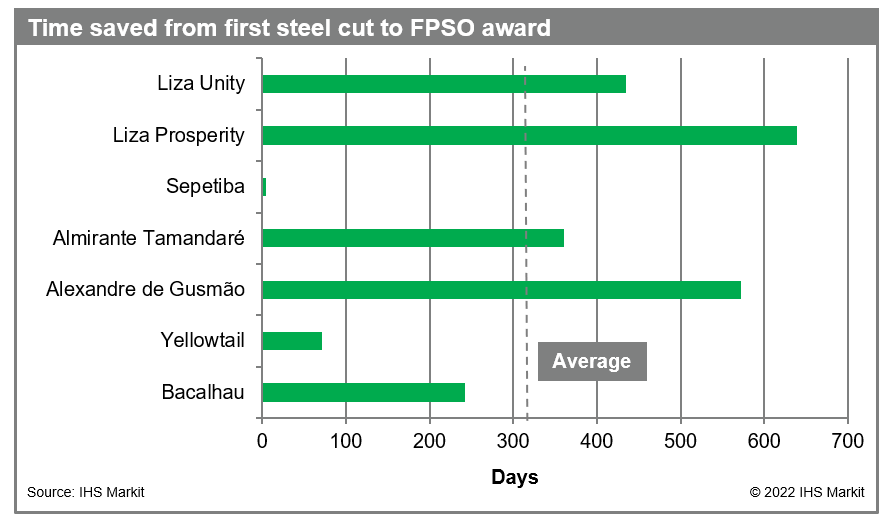 The payoff of starting the construction before the award is visible. As the companies and shipyards gain experience and know-how of the generic design, further reductions in construction time could be accrued. However, more units need to be delivered to allow for a better evaluation of productivity improvements.