The low oil price environment continues to take its toll on oil producing countries worldwide. The effects, as the PEPS Oil & Gas Risk Team has discussed previously, have been asymmetrical, but some Sub-Saharan Africa (SSA) countries have been among the worst-affected. Several such countries have seen spikes in civil unrest that have threatened, or even targeted, oil production. Seeking to address the retrenchment of investor interest, there have also been improvements to investment terms, from fiscal incentives, to reworked bid rounds, to a restructuring of the NOC role in new investment. 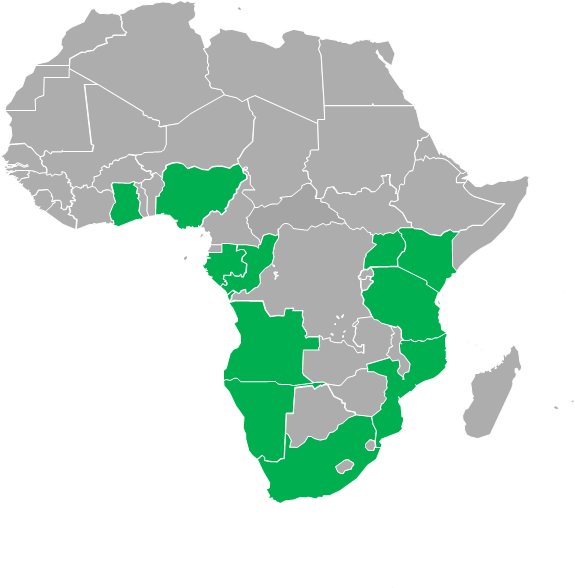 How might an upstream investor that is screening for both emerging opportunities and risks in the region view relative country attractiveness today? We examine a set of 11 SSA countries, leveraging tools from the Petroleum Economics and Policy Solutions (PEPS) product suite.

Overall Attractiveness Scoring
An initial screening would need to balance indications of E&P prospectivity, fiscal terms, and above ground risk. In many cases, these various factors provide conflicting indications that must be balanced. Rigorous comparison requires quantification, via a standardized scoring system that enables country ranking and comparative analysis. A look at such scoring, taken from PEPS, shows these types of conflicting indications. Angola and Tanzania, for instance, score well on historical E&P success and activity levels. However their overall attractiveness is held back by tougher fiscal terms. Namibia provides a counterexample. There has been little recent exploration success, but it offers investors among the most favorable fiscal terms in the region, as well as a low above-ground risk environment. 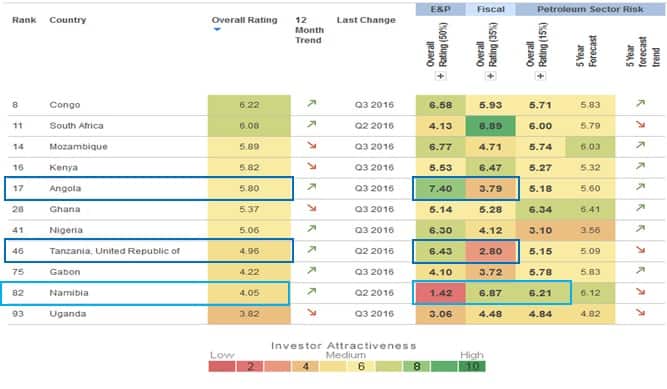 Fiscal Considerations
Detailed fiscal modeling of each regime reveals substantial variation in attractiveness across the country comparison set. As an example, average undiscounted State Take varies from over 90% for Tanzania at the top of range, to less than 40% for South Africa at the bottom.

Above-Ground Risk Considerations
The significant variation seen in overall oil & gas risk scoring across the comparison group has very different drivers in many cases. For example, some countries with poorer scoring in the Political and Economic category rating factors may nevertheless fare relatively well, overall. That is, favorable scoring in hydrocarbon sector categories - on metrics such as Ministerial Policy Volatility or Expeditiousness of Contract - may have significant counterbalancing influence. 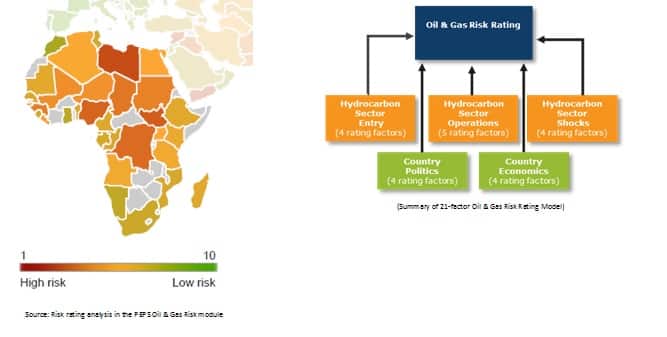 Critical Additional Considerations for Investors
A range of legal terms and procedures that a country requires can of course have a major impact on the total costs ultimately borne by an investor - in phases anywhere from initial exploration operations through production. Across this SSA comparison set, investors will note substantial outlier countries in areas such as: local content and training requirements, dispute resolution procedures, and bid terms offered.

Next Steps for an Investor or a Regulator
Analysis in line with that shown above is of course only a first step for 1) an upstream investor examining the region, or 2) a regulator in SSA who is considering how home country attractiveness compares with peers. The next requirements are: deeper examination of fiscal regime aspects driving fiscal scoring; the key individual factors to the above-ground risk picture; and "red flags" generated by outlier regulations or investment terms.

Armed with that full picture analysis, an investor may be able to negotiate improved terms, assess where risks could most likely be mitigated or managed, and identify non-fiscal terms, such as exploration period, that could sway an investment decision. On the other side of the table, a regulator equipped with this type of analysis is able to identify aspects of the fiscal regime that are both most acceptable for the host government, and which will move the needle on investor attractiveness. Similarly, the regulator could work to find ways to ensure improved protection for investors against above-ground risk factors, and consider regulatory changes to non-fiscal requirements.