AMOLED is becoming the biggest growth segment in the display business, especially the smartphone segment

On the supply side, Samsung Display-so far the dominant AMOLED display supplier-continues to improve the cost structure through economic scale and process know-how improvements, including in LTPS backplane, touch panel integration, light-emitting layer performance, encapsulation technology, the evaporation process. According to the IHS Smartphone & Tablet Display Cost Model, Samsung Display's AMOLED panel cost can be very similar to and competitive with LTPS TFT LCD at the same size and resolution. Furthermore, curved and flexible technologies are improving with better yield rates.

On the brand side, Samsung rarely shipped AMOLED to Chinese brands before 2015, when this policy changed. Many Chinese smartphone brands have started adopting AMOLED displays in their new product lineups to differentiate them from the TFT LCD models marketed in 2015. As a result, demand for high-end AMOLED smartphones has increased remarkably, not only for Samsung's Galaxy series, but also for several Chinese smartphone brands.

In 2014, there were only 21 smartphone models with AMOLED screens, and they were only high-definition (HD) or full HD (FHD) resolution. AMOLED displays were seen as high end and almost synonymous with the Samsung Galaxy name. In 2015, Samsung changed its policy and started selling OLED displays to other brands. More than 50 smartphone models worldwide had OLED screens in 2015 that came from many non-Samsung brands including OPPO, Vivo, Gionee, Micromax, Meizu, WIKO, Huawei, Microsoft, Google, and Blackberry. Most important, the size of AMOLED displays has increased from 4-5.x-inch to 6.x-inch, and resolution has improved from HD/FHD to wide quad HD (WQHD). Form factors include both rigid and flexible OLED displays.

Among global brands, Chinese smartphone makers are the most eager to adopt AMOLED displays. In the fourth quarter of 2015, Samsung Display shipped 30% of its AMOLED smartphone displays to external customers such as OPPO, Vivo, Gionee, Meizu, and Huawei. Samsung also started to release premium WQHD curved AMOLED displays to Chinese brands to win more rigid AMOLED display orders in China.

AMOLED panel shipments were up 48% year-over-year to 257 million in 2015, of which 30 million were flexible, according to the IHS OLED Display Market Tracker. In 2015, AMOLED accounted for 17% of the total smartphone market on a unit basis and 13% of the total mobile phone market (smartphones and feature phones).

OLED's success has also influenced the most iconic smartphone, Apple's iPhone. Apple is considering OLED for the next iPhone display. News in Korea indicates that Apple will adopt AMOLED displays in late 2017, and the main supplier will be Samsung Display. Samsung Display is building an OLED fab with a huge capacity specifically for the iPhone. LG Display is also building an OLED fab for Apple, and JDI and Sharp in Japan may move their AMOLED display development into mass production of both rigid and flexible AMOLED displays.

However, Samsung Display is currently one of the only makers supplying AMOLED displays for smartphones. Other display suppliers like LG Display, AUO, EverDisplay, and Visionox do not have a large volume of production for AMOLED smartphone displays. In fact, these makers are all struggling with the yield rate and reliability of their smartphone AMOLED displays.

The supply of AMOLED displays is a growing concern. The key to producing an AMOLED display is not only the controllability of the equipment, but also process know-how. Each display maker develops its own specific know-how because many details in the AMOLED process are not standardized, unlike with TFT LCDs. This hampers newcomers from rapidly ramping up AMOLED panel capacity. With Apple possibly jumping into the OLED mix and new display suppliers still needing time to ramp up capacity, OLED panel supply might be very tight in the next few years. 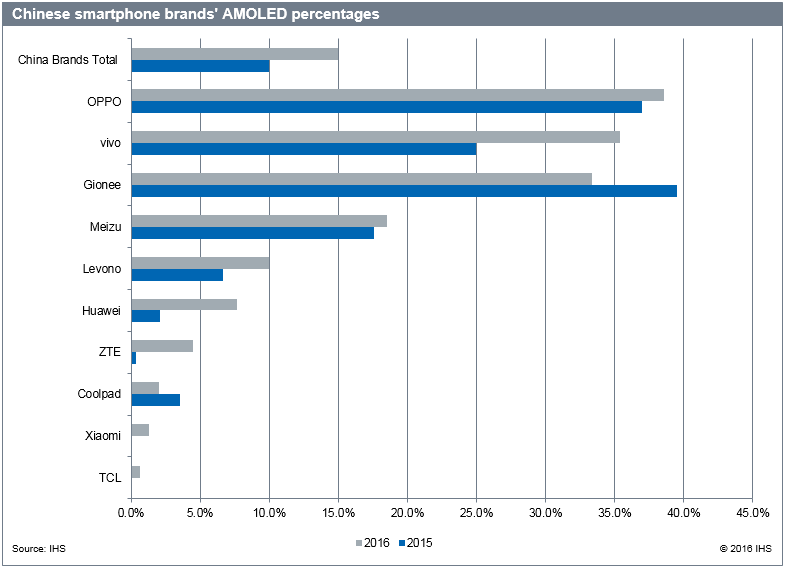 OPPO is the most aggressive OLED user in China, seeing the OLED display as a key differentiator for its smartphones. However, growing competition for and constraints on the OLED panel supply will limit OPPO's AMOLED expansion. OPPO's AMOLED penetration will grow from 37% in 2015 to 39% in 2016. Vivo also has a plan for AMOLED displays. In 2015, 25% of Vivo's handsets came with an OLED display. According to its plan, this will jump to 35% in 2016. Meizu will increase slightly from 18% in 2015 to 19% in 2016. Huawei's AMOLED display penetration will jump from 2% to 8%. Coolpad and Gionee are reducing OLED display penetration. Of these 10 suppliers, Xiaomi and TCL are the only two not taking any OLED in 2015, but Xiaomi may boost its share of AMOLED display if it finally make a good deal with its display supply chain.